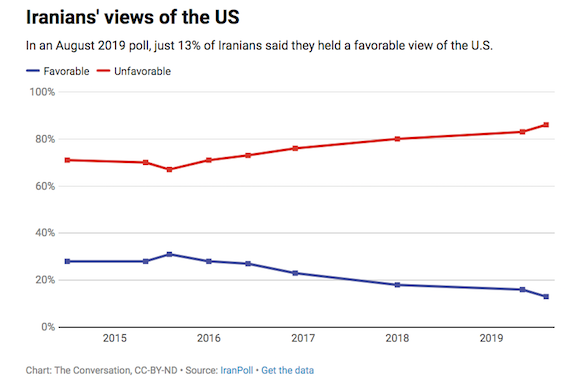 As someone who studies the U.S. image and world opinion, I am aware that this event is rapidly evolving, so it’s difficult to determine how things will settle. Polls aren’t yet available to reflect Iranians’ views on these recent incidents.

Good data are hard to come by, but IranPoll, a Canadian-based polling company, sheds some light. IranPoll has focused on Iran exclusively for years and provides unique survey data, especially from surveys conducted from May to October 2019 of 1,000 Iranians.

Iranians have felt strongly antagonistic toward the United States in recent years.

Since President Donald Trump took office, unfavorability of the U.S. among Iranians steadily increased, from 71% in January 2016 to 86% in May 2019.

These findings overlap with Gallup’s Annual Global End of Year Survey. In 2017, Gallup reported that 81% of Iranians held unfavorable views toward Trump.

America’s soft power – its ability to attract others to follow its example – is in a shambles among the Iranian public.

IranPoll compared survey data collected by Zogby, another polling firm, showing that Iranians have had a declining view of American values over the last 15 years. For example, two-thirds of respondents agreed in 2019 that “America is a dangerous country that seeks confrontation and control,” compared to just under half in 2005.

Shreds of the nuclear deal

The United States withdrew from the Joint Comprehensive Plan of Action, better known as the Iran nuclear deal, back in May 2018. At that time, U.S. Secretary of State Mike Pompeo announced 12 conditions that Iran would have to meet before America would consider going back to the bargaining table.

Iran hasn’t met these new restrictions, and has now withdrawn from the last restrictions to which it agreed under the Obama administration.

So, is there any hope for support for the deal among the remaining signatories – Germany, France, the United Kingdom, China, Russia and the European Union – to the agreement? Iranians don’t seem to think so.

Although 61% of respondents were confident in 2016 that other countries besides the U.S. would “live up to their obligations toward the nuclear agreement,” this reversed after Trump scrapped the deal in 2018. As of October 2019, only 30% of Iranians were confident that other signatories would hold up their end of the bargain.

U.S.-Iran relations are in turmoil. The stakes are quite high, given that the Iranian regime seems resolute now in its pursuit of nuclear weapons.

But it’s not just the United States and Trump that Iranians have deep antipathy toward. Data shows that Iranians are ambivalent toward their own leadership.

On the one hand, the assassination of Soleimani united Iranians at a level not seen in decades. But after the Iranian government shot down a civilian plane, denied it, then finally admitted so, public protests came out in force against the regime. Following the momentum of the 2009 Green Movement, many youth in Iran still desire more internal social reform.

The gross domestic product per capita in Iran has fallen in recent years, from about US$8,000 in 2012 to $5,265 in 2017. The average Iranian has felt the sting of economic sanctions and worries that the government is taking advantage of the situation through corrupt policies.