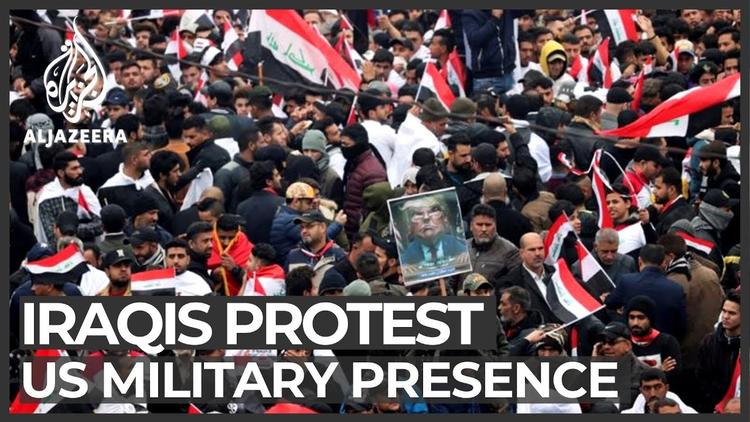 Ann Arbor (Informed Comment) – Tens of thousands of Iraqis massed in the Jadriya district of Baghdad on Friday to demand that U.S. troops leave Iraq. Mostly religious Shiites, some of whom came from the south of the country, they were responding to a call for demonstrations by Shiite cleric Muqtada al-Sadr and by heads of Shiite party-militias. Sadr heads the largest single party in parliament, with 54 seats, the Sairun. He was joined in the call for a “million-person march” by the Fath coalition (48 seats), which groups parties representing the Shiite militias who formed to fight ISIL (ISIS, Daesh) from 2014 forward.

Embed from Getty Images
Thousands of Iraqis demonstrate in the heart of Baghdad on January 24, 2020 to demand the ouster of US troops from the country. – Thousands of supporters of volatile Iraqi cleric Moqtada Sadr gathered in the Iraqi capital on Friday for a “million-strong” march to demand an end to the presence of US forces in Iraq, putting the protest-hit capital on edge. The march has rattled the separate, months-old protest movement that has gripped Baghdad and the Shiite-majority south since October, demanding a government overhaul, early elections and more accountability. (Photo by AHMAD AL-RUBAYE / AFP) (Photo by AHMAD AL-RUBAYE/AFP via Getty Images).

The protesters chanted, “Get out, get out, you occupier!” and “Yes, yes to Sovereignty!”

They were angry about Trump’s assassination at Baghdad International Airport on January 3 of Iraqi commander Abu Mahdi al-Muhandis and his Iranian colleague Gen. Qadem Soleimani, as well as about US airstrikes on December 30 on bases of the Kata’ib Hizbulah militia that al-Muhandis led, which they say left 40 dead. They underline that the base at Qa’im was used to block and kill ISIL operatives, and that the US in hitting them was apparently trying to help ISIL. (This is propaganda. The US maintains that Kata’ib Hizbullah was launching mortar attacks last fall and winter against bases where US troops were present, and killed a US contractor.)

Embed from Getty Images
Protesters carry a caricature of US President Donald Trump as supporters of Iraqi cleric Moqtada Sadr gather in the capital Baghdad for a “million-strong” march to demand an end to the presence of US forces in their country, on January 24, 2020. – The march has rattled the separate, months-old protest movement that has gripped Baghdad and the Shiite-majority south since October, demanding a government overhaul, early elections and more accountability. (Photo by AHMAD AL-RUBAYE / AFP) (Photo by AHMAD AL-RUBAYE/AFP via Getty Images).

Some of the protesters were dressed in white, the color of burial shrouds, to show their willingness to die for their cause. They were emulating Sadr’s father, Muhammad Muhammad Sadiq al-Sadr, who was threatened by Baathist dictator Saddam Hussein’s secret police in 1998 and who responded by preaching from the pulpit in a burial shroud. The secret police killed him in 1999 along with his two eldest sons as they were driving in Najaf, spraying the car with machine gun fire. The protesters were making an analogy between the assassination of the senior al-Sadr by Saddam Hussein and the assassination of Abu Mahdi al-Muhandis, the leader of the Kata’ib Hizbullah militia, by Donald Trump.

Embed from Getty Images
BAGHDAD, IRAQ – JANUARY 24: Thousands of Iraqis gathering at Jadariya, a neighborhood in the Baghdad city center at a rally against the presence of U.S. troops in the country, in Baghdad, Iraq on January 24, 2020. The demonstrators responded to a call by Iraqi cleric Muqtada al-Sadr who called for a million-man march to demand the ouster of U.S. troops from Iraq. (Photo by Murtadha Al-Sudani/Anadolu Agency via Getty Images).

Many Shiite politicians live in the tony Jadriya district, so that this show of force was a way of putting pressure on parliament to continue to legislate an American departure. Parliament voted on Jan. 5 to demand that the prime minister make arrangements to expel US troops from Iraq. Contrary to what many in the press keep saying, this was not an advisory vote. It obligated the Iraqi executive to carry out parliament’s will.

Around 10 am Baghdad time, a spokesman for Muqtada al-Sadr address the crowd with a statement from him. He called on all foreign troops to depart, for the abrogation of all security agreements between Iraq and the United States, and for the closing of Iraqi airspace to US fighter jets.

Sadr slammed Trump for acting with “superiority, haughtiness and arrogance.” Some of the demonstrators hanged Trump in effigy.

Embed from Getty Images
Anti-USA Demonstration In Baghdad
Thousands of Iraqis gathered in Baghdad on 24 January 2020 to protest against the presence of US troops in the country, responding to a call by influential Shiite cleric Moqtada al-Sadr. (Photo by Sajad Mohamed Ali/NurPhoto via Getty Images).

Sadr initially allowed his followers to choose whether to come to Jadriya or to join the weeks-long protests at Tahrir Square, which consist largely of young people demanding an end to corruption, who want both the U.S. and Iran out of Iraq.

He had urged his followers to ensure that the Iraqi security forces did not fire on the youth protests at Tahrir Sqaure, though he was not entirely successful. Two protesters at Tahrir were killed with live fire on Friday. Although Sadr attempted to make an alliance with the youth protesters, some of those interviewed rejected his leadership.

Update: At some point on Friday or Saturday morning, Sadr called on his followers to leave Tahrir Square, effectively withdrawing protection from the youth protesters. On Saturday, Iraqi security forces began forcibly clearing out the Tahrir Square protesters and their tents. Even some Sadrist youth saw this move as a betrayal.

Sadr’s statement demanded a timeline for the US departure, giving the government a hiatus during which to act. He also called on the Shiite militias to be patient and not to act rashly, saying that Iraq did not want a military confrontation with the United States.

The Iraqi executive at the moment is paralyzed in taking any action because the prime minister, Adil Abdulmahdi, resigned in the face of the anti-corruption demonstrations last fall, but his political coalition has not yet agreed on a replacement who would be acceptable to the crowds at Tahrir Square. The latter want genuine change, charging that the ruling parties are corrupt, using a spoils system to funnel government resources to their own party hacks. Abdulmahdi has left it to his successor to pursue the departure of the US military.

Iraqi President Barham Salih met with Trump on the margins of the Davos Conference in Switzerland this week and appears to have assured him that US troops would stay in Iraq. Salih’s action met with dismay and anger among many Shiite Iraqis. Salih is Kurdish, and the Iraqi presidency is ceremonial. So he actually represents only a minority of Iraqis, and does not have the authority to over-rule the will of parliament. The Kurdish and Sunni Arab minorities in Iraq do not on the whole want the US military to leave, and did not join in the parliamentary vote, which nevertheless was passed by a comfortable majority of 170 votes, according to the Iraqi Shiite press.

Many Kurds fear that without the US, ISIL might see a resurgence in northern Iraq, and the minorities fear that if the US leaves, Iran’s influence will grow to be even greater.

In contrast, the Shiite militia leaders and some Shiite ayatollahs accuse the United States of having been responsible for the rise of ISIL in the first place, citing the memoir of former secretary of state Hillary Clinton and the campaign speeches from 2016 of Donald Trump.