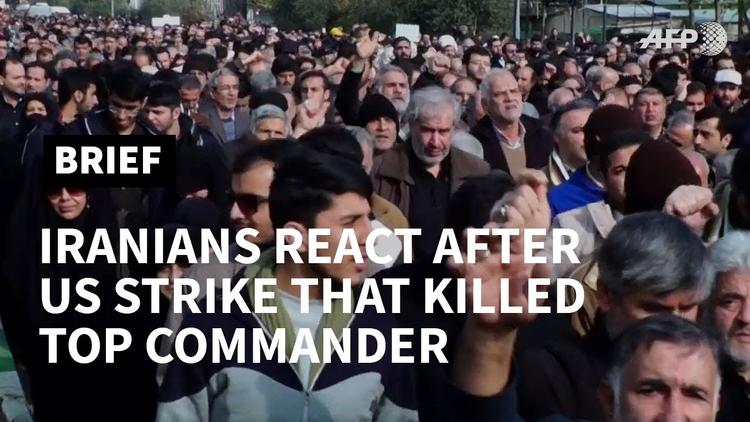 Ann Arbor (Informed Comment) – As is always the way with Western colonialists, Trump administration figures such as secretary of state Mike Pompeo gave it out on Friday that the people of Iran are dying for the United States to invade and occupy them, and are just tickled pick that the US assassinated Gen. Qasem Soleimani. There are always divisions in the society targeted for colonization of which the imperialist seeks to take advantage. The French played Amazigh against Arab in Algeria. So of course many Iranians had conceived a dislike of the authoritarian hard liner Soleimani. But in the realm of nationalist feelings, it is one thing to denounce an s.o.b. and quite another thing to be happy that some overbearing, hulking foreign imperialist Power summarily rubbed him out. He was after all their s.o.b.

The Trump administration charge that Soleimani had to be killed because he was planning an immediate, large scale operation against America in Iraq strikes no one in Iraq or Iran as very likely. An Iranian professor observed that Soleimani had not sneaked into Iraq but rather took a commercial flight and went through passport control with his diplomatic passport. Not signs of a covert operation. He alleged that the Iraqi government had invited him. I would add that the US did not increase embassy security in the past week, which allowed the embassy to be invaded. If they thought there was a dire such threat in the offing, wouldn’t they have sent in some Marines? Only after they received a stronger than expected reaction to their assassination campaign did they finally take the security of the embassy seriously.

So hundreds of thousands of Iranians came out into the streets on Friday to mourn a martyr. In early Christianity it was said that the blood of the martyrs were the seed of the church. No maxim could better sum up pious Shiism. Like Christianity, the spiritual center of Shiism is the passion of a holy figure (in the latter case, the Prophet Muhammad’s grandson, Imam Husain [d. 680]). Husain was called upon by the oppressed Muslims of Iraq, the story goes, to lead them in protest against the oppression of the Umayyad caliphate in Damascus. The caliph Yazid (r. 680-683) sent a military expedition against Husayn’s small band at Karbala in Iraq, and massacred them. Husain was beheaded and his head taken to Damascus on a stave, where it was deposited before Yazid. Old men at court wept. One said, “I saw the Prophet’s lips on that cheek.” Or so the hagiographers tell the story every year at Ashura. Popular Shiism has whole rituals of mourning, of flagellation and weeping.

What Trump did was give the pious Shiites of Iran and Iraq a martyr, and folk artists are already depicting Soleimani at Karbala. This would be like painting a slain American general into a crucifixion scene.

Enormous crowds demonstrated throughout Iran, shouting “Death to America!” and mourning Soleimani. This is Tehran:

AFP: “Tens of thousands rally in Iran capital against US ‘crimes’ | AFP”

And here are the crowds in Soleimani’s home town of Kerman:

And there was also a huge procession in Shiraz. And not only in Iran but in Pakistan and India, where there are Shiite communities. (There could be 24-40 million Shiites in Pakistan and 10 million in India. There are probably about 20 million in Iraq. Everywhere they chanted “Death to America, Death to Israel.” There are likely 180 million Shiites in the world, a little less than the combined populations of Germany, Britain and France.

So however annoyed Iranians might have been with Soleimani, for the moment it seems that opposing American lawlessness and oppression has suddenly become more important for a lot of them.

The Bush administration liars, who are making the rounds on t.v. again now, also promised clueless Americans that Iraqis were just dying to be militarily occupied by the U.S. They were dying, all right, but for the opposite.

As for Iraq, caretaker prime minister Adil Abdulmahdi denounced the assassination of Suleimani and of the Iraqi commander Abu Mahdi al-Muhandis as a brazen violation of Iraqi sovereignty, as assassinations, and as injurious to the dignity of the Iraqi nation. Unlike US politicians, Abdulmahdi isn’t in any doubt that this was an assassination.

People who don’t know modern standard Arabic or its history of deployment in modern politics should understand that “violation,” “sovereignty,” “dignity,” and “nation” are among the more emotionally powerful keywords that can be invoked.

Abdulmahdi must have been worried by further airstrikes on Friday in north Baghdad at Taji, which may have targeted Popular Mobilization Forces (Shiite militias) but only managed to destroy some ambulances. The Trump administration is the prime suspect in these further strikes from the point of view of the Iraqi government. Although rumors circulated that more PMF leaders had been killed, this is not true. But the possibility that the Trump administration is attempting to make a military coup in Iraq must weigh on Abdulmahdi’s mind.

1. In Taji, north Baghdad, six are killed inc a senior PMU commander
2. A 2nd airstrike have targeted PMU in Sinjar in northwest Iraq
3. A 3rd airstrike is reported in Mosul.

The US bombing Izadi (“Yazidi”) Popular Mobilization Forces makes no sense politically unless the Americans just are so ignorant they cannot tell the difference between Kurdish Izadis and Arab Shiites.

The youth protesters in downtown Baghdad and other cities initially broke into happy dances when they heard Soleimani had been murdered, since he was plotting to repress them. But reports on Friday suggest that they chanted against both Iranian and US presence in Iraq.

Some religious Shiites who had come to resent Iranian influence in this Arab country likewise made an abrupt about-face. In Karbala, where the Iranian consulate was recently torched, an enormous crowd mourned Soleimani as a martyr, and no one mourns martyrdom better than Karbala’is. Trump had them chanting “Death to America” in the shrine-mosque of Imam Husain. You would really go out of your way to avoid that.

The really huge Iraqi crowds are gathering Saturday for Sulaimani’s funeral at Kazimiya in Baghdad, after which his body will be taken back to Iran.

Muqtada al-Sadr, the Iraqi nationalist Shiite cleric who had his differences with Soleimani, nevertheless condemned America’s imperial arrogance and pledged to reactivate his Mahdi Army militia to defend Iraq from the United States. Sadr’s Sairun Party, with 54 seats, is a kingmaker in parliament, and will work to pass legislation expelling US troops.

Hadi al-Amiri, the head of the pro-Iran Badr Corps paramilitary, likewise called for the Shiite parties to close ranks and stage a parliamentary vote on expulsion. This can be done with 51% of seats, and between them al-Sadr and al-Amiri have 102 seats. (The Popular Mobilization Forces or Shiite militias are also a political party, Fath, with 48 seats).

Parliament will hold some consultations today, Saturday, and the anti-American factions will attempt to hold a vote on Sunday to expel US troops. Iraq is a mess these days, and it isn’t clear whether they can get a quorum, or a majority for expulsion. The US, with its sophisticated military equipment and signals intelligence, still protects the Iraqi political elite from a resurgence of ISIL, and it isn’t clear that Iran could play the same role. Some Iraqi politicians unhappy about being recolonized by Trump may nevertheless prefer the American bear hug to the genocidal ISIL and to the bossy Khomeinists of Iran.