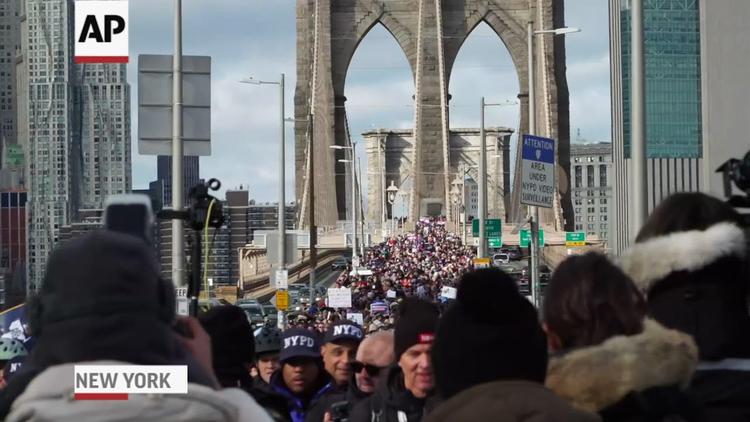 (The Baltimore Sun) – What could cause such hate in a person that would drive them to kill and injure innocent members of a minority group?

I was troubled by this distressing question once again, when on December 28, during the last candle lighting of Hanukkah, an intruder with a large knife burst into the home of a Hasidic rabbi in a New York suburb, stabbing and wounding five Jews who had come to celebrate Hanukkah.

In the face of this horrific violence, both the Jewish and non-Jewish communities responded with resilience and unity, which is ultimately what the story of Hanukkah represents.

This eight-day holiday celebrates the Maccabees’ victory over the Helenists during the time of the Second Temple. The Helenists joined forces with the Syrian-Greeks in suppressing Judaism, advocating a total assimilation into Syrian-Greek culture. The Maccabees, however, rejected their efforts and fought back, leading to a Jewish victory.

Resilience runs in the blood of the Jewish people — from the earliest persecution by Pharaoh in Egypt, through the persecution by the Romans during the time of the Second Temple, through the Crusades by the Catholic Church beginning in the 11th century, through the Spanish inquisition in the 1400’s, through persecution by Czarist Russia in the 19th century, and finally the mass genocide in the Holocaust by Nazis and their collaborators. Jews were always targeted yet consistently showed resilience and determination.

In contrast, during many of these dark periods, the Jews in the United States enjoyed freedom and acceptance, and were able to integrate almost fully into the economic and cultural life in America. The United States served as a place of refuge, where Jews were granted civil rights and everyone could practice their religion freely.

However, the attack on the last night of Hanukkah, coming on the heels of other terrorist acts against Jews, Hispanics and other minorities, fills us with shock and disbelief. How is it possible that in a country that has been a beacon of equality and religious freedom, people are still being targeted because of their religion or ethnicity?

Another very recent example: on December 24, an Iowa woman intentionally ran over a 14- year-old girl and attempted to kill her because she “was a Mexican.” Three people were killed in what police have said was a targeted shooting at kosher grocery store in Jersey City, New Jersey last month.

Indeed, under the Trump Administration, we have seen a drastic rise of hate crimes: The FBI reported 7,175 incidents of hate crimes in 2017 — a 17% increase from 2016, and an uptick for three consecutive years from 5,479 incidents in 2014, according to a Politifact article.

This step backwards goes beyond persecution of Jews; rather, it depicts the very scary direction this country has taken under President Donald Trump. These incidents and statistics clearly indicate that the Trump Administration has fostered an era in America where xenophobia, racism and anti-Semitism are welcomed and normalized.

Now, more than ever, it is pivotal to fight for the restoration of tolerance, equality and acceptance in this country. All fair-minded citizens should stand up and fight back by showing resilience. To counter Mr. Trump’s rhetoric of hatred and bigotry — we must demonstrate love and compassion.

But we must go beyond resilience — we all need to get politically engaged in the approaching elections, including the primaries, in order to change the dark and insidious narrative that the Trump Administration has adapted.

In contrast to the racist and hate-filled tweets that Mr. Trump regularly sends out to millions of his followers, the Democratic candidates should send out equally-forceful, but totally-opposite tweets.

When presidential candidate Sen. Bernie Sanders traveled to Des Moines to celebrate the final candle lighting, he posted on Instagram that he is delighted “to once again reaffirm our belief in an America where justice, freedom and religious freedom apply to all people — and to stand united to wipe out all forms of racism, discrimination, and bigotry.”

It is with this sentiment and determination to act that all of us must must approach the upcoming elections and the new decade.

Reprinted from The Baltimore Sun with the author’s permission.