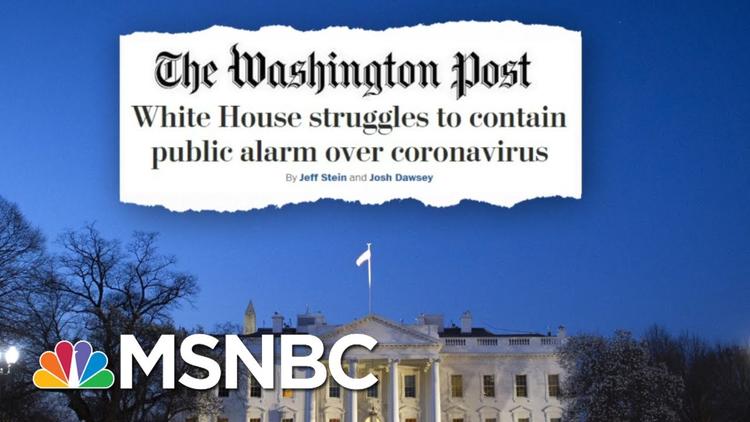 Ann Arbor (Informed Comment) – Christine Romans at CNN wonders if Trump’s news conference on Wednesday evening on the Covid-19 coronavirus was his “Mission Accomplished” moment. After he invaded Iraq in the spring of 2003, George W. Bush gave a triumphant speech that May about how war was now good for humankind beneath a banner that proclaimed “Mission Accomplished.” Then Iraq went to hell.

On Tuesday, the Dow fell over 1,000 points on fears that the coronavirus would slow the world economy. If it becomes a pandemic, it could cost the world a trillion dollars. Leaks to the press from Trump’s circle during his trip to India suggested that he was furious over the stock market fall, and fretted that a financial crisis impelled by fears of a pandemic would harm his reelection chances.

Nancy Messonnier, the director of the Center for the National Center for Immunization and Respiratory Diseases, said in a briefing on Tuesday,

“I had a conversation with my family over breakfast this morning, and I told my children that while I didn’t think that they were at risk right now, we as a family need to be preparing for significant disruption of our lives. . . We expect we will see community spread in this country. . . It’s not so much a question of if this will happen anymore but rather more a question of exactly when this will happen and how many people in this country will have severe illness.”

This frankness from a government official was completely unwelcome to the political side of the Trump administraton.

Larry Kudlow wouldn’t recognize a virus if he donned the Ant-Man suit and shrank down to eyeball one. He is just a Fox shill for lipstick-on-pig stock purchases whom Trump catapulted into an office he does not dignify.

On Wednesday, Trump tried to contradict his own CDC, saying “I see the futures are up today, up substantially . . . That’s a very serious thing, but we think we’re in pretty good shape in the United States.”

In fact, as Romans points out, the futures market was not up, it was flat, and world markets were down.

The insouciance of Trump and his sunny attempt to talk up the market for narrowly political purposes was mirrored in Iran.

Last week the Iranian authorities insisted that there were no Covid-19 cases in Iran, but now that admit to 19 deaths and 139 cases.

Alex Ward at Vox observes that Iraj Hairichi, the deputy minister of health, became a darkly humorous laughingstock when he went on TV to assure the public that the Islamic Republic of Iran was in control of the situation. He was behaving oddly during the appearance, and later had to admit that he had come down with the virus, himself.

The center of the COVID-19 outbreak in Iran is the holy city of Qom near the capital, Tehran. Qom is the site of a major religious shrine, Hazrat Masoumeh, to which pilgrims flock. It is common for visitors to rub their hands and faces on the bars around the tomb to acquire blessings. The visitors are not afraid of contracting a disease this way because they hold that shrine visitation is healing.

Like Trump’s Evangelical base, the Iranian government’s Shiite base are contemptuous of science and often put their faith in phony nostrums peddled by televangelists.

Member of parliament Ahmad Amirabadi Farahani maintained that 50 had died in Qom alone and that the minister of health was involved in a cover-up.

The BBC reports that President Hassan Rouhani and the other high officials are refusing to implement quarantines the way China has. In short, the clerical, religious government is declining to take any significant steps to slow the spread of the virus.

They sound just like Larry Kudlow and Donald Trump.

Both are representatives of extreme nationalistic governments whose high officials fear the wrath of the public and who would rather try to pull the wool over peoples’ eyes than to implement difficult but effective public health policy.