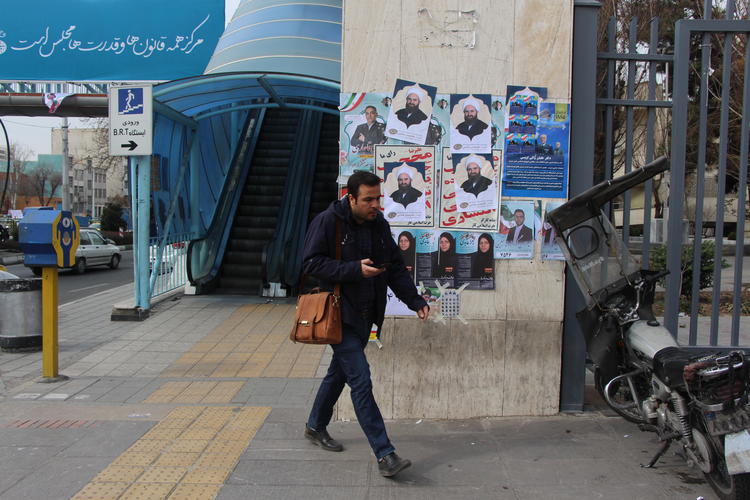 (Progressive.org) – ‘TEHRAN—The parliamentary candidates had rented a large hall for a campaign rally, but only a few hundred supporters showed up. They came to see Mohammad-Bagher Ghalibaf, a leading hardliner and possible presidential candidate next year.

As warm-up speakers droned on, the audience responded with ritualistic chants but little enthusiasm. Many stared at their smartphones. Then the event ended abruptly. Ghalibaf never showed up.

The hardliners, known here as principalists, won a landslide victory in Iran’s February 21 parliamentary elections but without the kind of enthusiasm that marked previous campaigns.

The principalists won all thirty seats in Tehran and 220 of the 290 total parliament seats. But the nationwide turnout was just 42.5 percent, compared to almost 62 percent for the 2016 parliamentary elections, and was the lowest since the 1979 Revolution. In Tehran, only 25 percent of eligible voters went to the polls.

The principalists defeated the reformists, who had previously dominated the parliament and supported President Hassan Rouhani.

A prominent journalist and reformist supporter predicted the principalist landslide. He told me that President Donald Trump’s withdrawal from the nuclear accord in 2018 and the economic problems stemming from U.S. sanctions “humiliated the reformists. It was Trump’s gift to the hardliners.”

Interviewed at random in Tehran, Abdullah Zamankhanpour expresses the view of many alienated residents. He used to be a member of the ultra-conservative paramilitaries known as basij, but quit in disgust when he saw corruption among the officers. Now the sixty-two-year-old retiree doesn’t support either the principalists or the reformists.

“All the politicians are liars,” he told me.

President Rouhani, a centrist, was first elected in 2013 with reformist support. He became very popular with the passage of a health care plan to help low-income Iranians, known locally as “Rouhani Care.”

Under Rouhani’s watch, Iran successfully negotiated the nuclear accord with the Obama Administration. That agreement, the Joint Comprehensive Plan of Action, placed stringent restrictions on Iran’s nuclear energy program. It opened the possibility of removing some U.S. sanctions and allowing much needed foreign investment.

But Trump’s withdrawal from the the agreement in 2018 badly undercut its supporters in Iran. The principalists argued that Rouhani and the reformists had given up the country’s national sovereignty, and then got stabbed in the back.

The assassination united Iranians in grief and anger. Funeral processions commemorating his death filled the streets of several cities with an estimated 25 million people.

Nader Talebzadeh, a principalist leader and host of an influential weekly TV program, told me Rouhani never should have agreed to the pact in the first place. Iran has no nuclear weapons and no plans to build them, he said.

“We have signed the Non-Proliferation Treaty and accepted scrutiny by the International Atomic Energy Agency,” he said. “Why should we be sanctioned more?”

Events in the past month further contributed to the principalist victory. On January 3, a U.S. drone assassinated General Qasem Soleimani at the Baghdad airport. Soleimani was an important figure in Iran’s Revolutionary Guard and the nation’s second most popular leader, behind Supreme Leader Ayatollah Ali Khamenei.

The assassination united Iranians in grief and anger. Funeral processions commemorating his death filled the streets of several cities with an estimated 25 million people. Soleimani’s death strengthened the principalists because Iranians view them as staunch opponents of U.S. aggression.

On January 8, an Iranian missile accidentally shot down a Ukrainian passenger jet. The government failed to acknowledge responsibility for three days, angering many Iranians. Reformists were dispirited by Rouhani’s response, and many chose not to vote at all.

Iran has a unique electoral system that allows elections—but only within a narrow range of candidates. Tens of thousands announced plans to run for parliament. The Guardian Council, a body of twelve Islamic clerics, makes the ultimate decision on who runs. This year, roughly half of the 14,444 prospective candidates were disqualified, the majority of whom were reformists and moderates. So the deck was already stacked in favor of the principalists.

The Iranian parliament has little real power, serving mainly as a sounding board for debates within Iran’s ruling circles. Real power lies with Khamenei, who can override decisions made by parliament and the president.

The principalists, who derive their power from control of the judiciary, intelligence services, and Revolutionary Guard, have cracked down hard on popular demonstrations and political dissidents.

Reformists seek moderate change within the Islamic system and have been relatively less repressive. Calling for free market reforms, however, they advocate neo-liberal economic policies of privatization and eliminating government subsidies to ordinary Iranians.

The principalists ran as populists, blaming Rouhani for the country’s 26 percent inflation rate as of January and an economy that shrank by 7.1 percent in 2019.

Sayed Miaad Salehi, an up-and-coming principalist, told a rally of retirees, “There’s no transparency concerning the very high salaries of some government officials. If elected, I will promote transparency and work to lower the outrageously high government salaries.”

Mahmoud Sadeghi, a reformist member of parliament, told me that the call to lower government salaries has a populist but “very superficial appeal.” He noted that the economy suffers under harsh U.S. sanctions and from mismanagement in the economic system. Cutting high government salaries is “a very simple solution for complicated economic matters. These are populist views, but the economic problems are very deeply rooted.”

While all this is going on, Iran faces a coronavirus outbreak second only to China in the number of confirmed deaths. Virus cases were first discovered in Qom, a city eighty miles from Tehran. Initial reports indicate public health authorities were caught unprepared.

“The medical team is really helpless because it lacks special equipment and supplies, nor have they received necessary training to protect themselves,” one hospital source in Qom told IranWire. “It uses the same supplies, like masks and disinfectants, as ordinary people do. The medical staff is extremely worried that they could carry the virus home with them.”

Containing the virus will be particularly difficult because people traditionally travel to see family during the Persian New Year, which begins March 20. It’s not yet clear what steps the government will take to quarantine the virus.

So now the Iranian government has one more major crisis to resolve. But in my conversations with dozens of Iranians, none said the crises will lead the government to compromise with the Trump Administration nor even hold negotiations. The country faces big problems, but Trump’s policies, everyone seems to agree, are not the solution.

This column was supported by the Pulitzer Center.

Reprinted with author’s permission from Progressive.org.