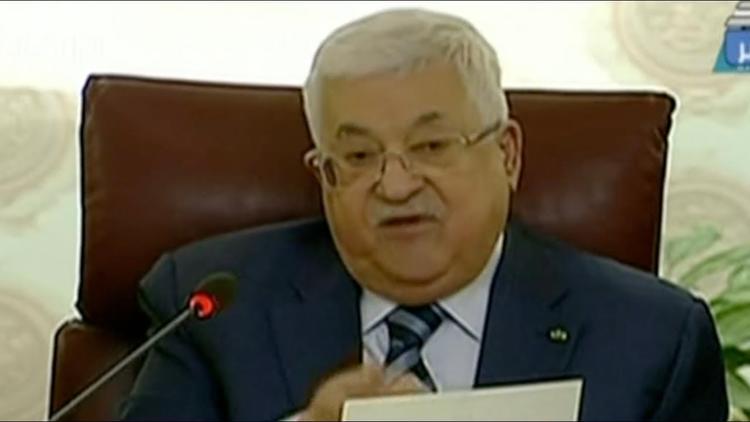 Ann Arbor (Informed Comment) – Al Jazeera reports that Palestine president Mahmud Abbas announced Saturday that he has informed the Israeli government and the Trump administration of “a severing of all relations with the two of them, including security relationships.” The move came in response to the Kushner Plan for the Palestinians announced by Trump on Tuesday. He made the statement in an address to an emergency meeting of Arab states at a foreign ministers’ meeting of the Arab League in Cairo.

Abbas explained to the Arab foreign ministers that Palestine had already severed relations with the Trump administration over its recognition in 2017 of Jerusalem as the capital of Israel, but that Palestine had continued to have a relationship with the US Central Intelligence Agency for the purposes of jointly combating terrorism. It appears that this relationship has also now been ended.

He continued that Palestine had informed Israel that it would have to fulfill its responsibilities as the Occupying Power, adding, “We addressed a letter to Israel and America in which we conveyed to them the severing of relations with them, including the security relationship.”

He said that he had declined to receive Trump’s Plan or to reply to Trump’s attempt to contact him, saying that Palestinians would never accept it and that Abbas refused to go down in history as the man who sold Jerusalem.

He said the American Plan would solidify complete Israeli security dominance over everything west of the Jordan River and that it would allot a triangle of Israeli Arab citizens instead to Palestine “in order to get rid of them.”

He said that there had been no contact between Palestine and the Trump administration “because we no longer trust them,” and that the four occasions on which he had been brought together with Trump had been entirely fruitless, and that indeed, after the meetings Trump has slashed aid to the Palestinians and declared all of Jerusalem the Israeli capital.

He said that the had called for the emergency Arab League summit in Cairo to inform the Arab world of the American Plan and “to prevent its being ensconced as a new center of authority.”

The foreign ministers of the 22 member states of the Arab League voted unanimously completely to reject the Kushner Plan. The Arab League statement explained the rejection, saying that the American Plan did not offer the slightest rights to the Palestinians or provide for any of the aspirations of the Palestinian people. Moreover, it contravenes, they said, the framework of the peace process and violates international law and the decisions of the United Nations on which that process had been built.

The Arab nations warned Israel against trying to implement the Plan’s provisions, and called on the international community to confront any Isreli move to apply it on the ground.

The Arab League called for a two-state solution in accordance with UN resolutions (which means the Arab League recognizes Israel inside 1967 borders).

It warned Israel that no further steps toward relations with any Arab country would be taken until Israel accepted the 2002 Arab League peace plan, which envisaged two states, one on the West Bank and Gaza, and the other Israel inside 1967 borders.

Israeli Prime Minister Binyamin Netanyahu, who is under indictment for bribery and corruption, had been hoping that Saudi Arabia would recognize Israel and establish diplomatic relations, and that this development would help him win the upcoming elections.

It is said that crown prince Mohammed Bin Salman wants to pursue relations with Israel but that his father, King Salman, and the royal advisers are afraid of popular unrest if they took that step, and anyway do not want the Kingdom to be seen as throwing the Palestinians under the bus.

The Beirut-based pan-Arab news site al-Mayadeen quoted a report on Israeli television channel 12 admitting that the Arab League vote was a surprise and a huge blow to American and Israeli diplomacy. The paper said that the Israeli commentators reported that there had been indications that some Arab countries would rejected Mahmoud Abbas’s complete refusal of the American Plan. Moreover, it alleged, they said that Trump had been in informal contact with a number of the Arab states urging them to back his Plan. Instead, they all voted to reject it out of hand. Al-Mayadeen says that the Israeli commentators speculated on the reasons for this abrupt about-face, suggesting that these Arab governments were worried about pressure from Iran and Turkey, and about a massive backlash from their own populations.