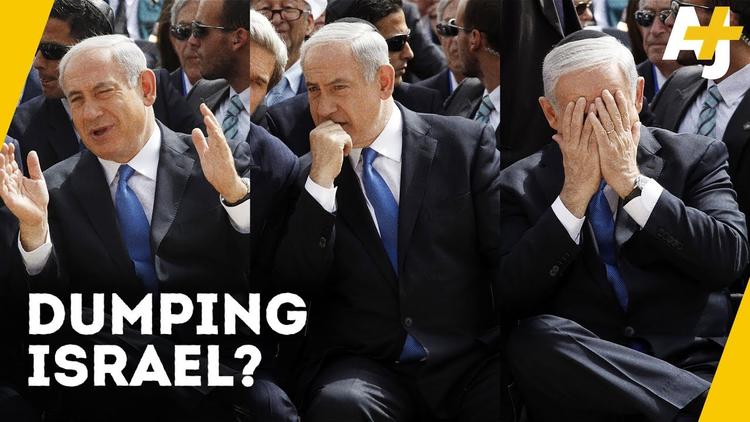 ( Middle East Monitor ) – The latest clash in the American civil war over Israel, which pits liberal progressives against right-wing reactionary nationalists, ended with an apology at the weekend by the American Israel Public Affairs Committee. Better known as AIPAC, the anti-Palestinian group issued a full apology for posting an advertisement accusing the Democratic Party of anti-Semitism. It has finally realised that its vilification of US lawmakers critical of the Zionist state is actually self-harming.

“Radicals in the Democratic Party are pushing their anti-Semitic and anti-Israel policies down the throats of the American people,” the lobby group had said on Facebook. “America should never abandon its only democratic ally in the Middle East.” It urged its supporters to sign a letter of protest and not “abandon Israel”.

AIPAC’s fury was provoked by the insistence of senior Democrats that the annual $3.8 billion aid given by the US to the Zionist state should be conditional upon a change in Israeli policy towards the Palestinians. Would-be presidential candidate Bernie Sanders is one target of AIPAC’s ire. The Vermont senator, who is Jewish, has been the most powerful proponent of leveraging US aid to get the Israelis to respect international law.

Sanders is not alone amongst Democrats in expressing growing frustration over Israel’s annexation policy. Elizabeth Warren, another leading presidential contender, has also backed this idea in reply to a question about withholding aid to Israel if it continues building settlements in the occupied West Bank and moves further away from a two-state solution: “All options are on the table,” she insisted. Likewise, Pete Buttigieg, another would-be candidate, echoed his colleagues’ views when asked about withholding US aid to Israel.

There seems to be a new mood in the US concerning Israel. Not since 1991 when George H W Bush refused to give Israel $10 billion in loan guarantees that it requested to resettle Soviet immigrants, until the Israelis froze settlement growth in the West Bank, have US politicians been as outspoken about penalising the Zionist state for its unlawful behaviour. On the rare occasions that this has occurred, such as when Senator Rand Paul (Republican, Kentucky) attempted to block bipartisan security aid to Israel in 2018, members of Congress were not subjected to the kind of excoriation that was witnessed over the weekend.

It would seem that Americans have forgotten the time when the least they expected from their politicians and Presidents was global leadership in punishing rogue behaviour of the kind that has been a consistent feature in Israel. Furthermore, to be able to do this without being accused of “anti-Semitism”. Would AIPAC have considered President Dwight D Eisenhower an anti-Semite for threatening to withhold US aid in 1956 unless Israeli troops withdrew from Egypt within a 36-hour deadline? Or President Gerald Ford, who did something similar by halting new arms sales to Israel which had the effect of forcing a partial Israeli withdrawal from the Sinai in 1975?

Likewise, one suspects Americans would have been outraged if President Jimmy Carter, who forced Israel’s withdrawal from Lebanon in 1977 with a threat to cancel future arms sales, had been labelled an anti-Semite by a lobby group like AIPAC. Carter, who would go on to describe Israel as an “apartheid” state, also threatened to withhold aid during the Camp David talks that led to Israel leaving the Sinai completely. Some degree of impartiality was maintained even under President Ronald Reagan, who in 1982 banned new sales of cluster bombs to Israel for six years after it was determined that that it was using them in Lebanon in violation of America’s Mutual Defence Assistance Agreement with the Zionist state.

In the three decades since George Bush Senior refused to give Israel the loan guarantees, no serious threat has been issued by any US President despite Israel’s acceleration of its colonial-expansionist policies. Instead, the Zionist state has acquired a unique status in Washington. It is viewed with the kind of awe one normally associates with religious fundamentalists, whose notion of the sacred is filled with a zeal that defies common sense.

AIPAC has apparently realised the self-harm that its advertisement has caused. The pro-Israel lobby group has been the most effective force in making and maintaining Israel’s bipartisan status immune to political changes on Capitol Hill. However, Israel’s policies and the death of the two-state solution, to which liberal supporters of Israel clung desperately in the hope that the Zionist project could be redeemed, have made this an impossible task.

A growing number of progressive Democrat representatives no longer want to remain silent over the cost of America’s abiding loyalty to Israel. Their outspoken views, which in all likelihood would have been quite normal under previous administrations during the Cold War, reflect a growing chasm in US politics as far as Israel is concerned.

The image of the Zionist state as a liberal democracy, crafted painstakingly over many years, has taken a battering. In the decades in which Israel has enjoyed reverential status in Washington, it has managed to empty the Palestinian cause of any moral and legal considerations, and divorced it from normal laws governing the behaviour of democratic states. At the same time, it has asserted for itself an ethno-religious identity at odds with secular liberal and democratic values while overseeing the longest military occupation in modern history which denies millions of people their basic rights. It is no wonder that liberal Democrats in the US are turning their backs on Israel.

A typical pro-Israel American now belongs to the Republican Party, or the far right, often now one and the same. Paradoxically — given that it was far-right ideology which was behind the Holocaust — Israel might be losing the support of progressive liberals, but it is gaining support on the right and far right, not only in the US, but also around the world in places like Hungary and Brazil, for example. According to a 2018 survey carried out by the Pew Research Centre, nearly eight in ten US Republicans (79 per cent) sympathise more with Israel than they do with the Palestinians. This was a 29 per cent increase from 2001. On the other hand, sympathy for Israel amongst the Democrats has declined to just 27 per cent.

These changes in social attitudes are now reflected in Congress through the election of representatives like Ilhan Omar and Rashida Tlaib. This has made AIPAC’s task of preserving Israel’s status as a bipartisan issue more daunting than ever before.

AIPAC’s “unequivocal apology to the overwhelming majority of Democrats” whom it admitted were “rightfully offended” by being labelled anti-Semites, demonstrates that the pro-Israel lobby is fighting a losing battle. Americans now “know too much” about Israel and its occupation to stay firmly on the fence. With attitudes towards the Zionist state hardening on both sides, Israel is unlikely to remain a bipartisan issue much longer. Instead, it will come to represent the dividing line between liberal democracy and ethno-religious fundamentalism, something with which no self-respecting Democrat would ever wish to be associated.

Are The Democrats Breaking Up With Israel? | AJ+