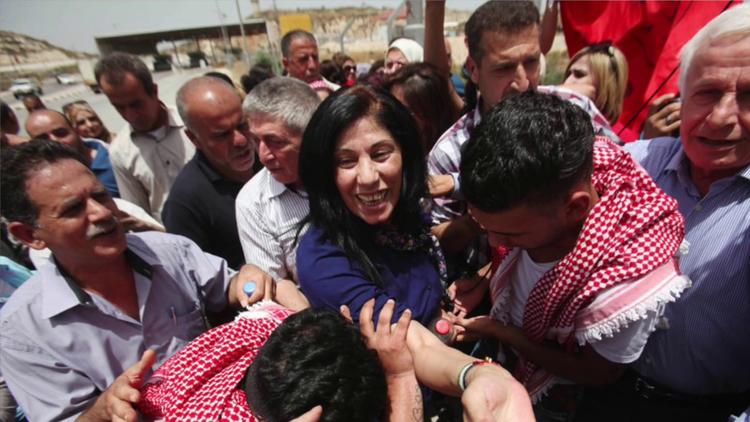 Khalida Jarrar is a Palestinian feminist, a lawyer, educator and an elected parliamentarian. Over the years, she came to symbolize Palestinian popular resistance in the occupied West Bank, enraging the Israeli occupation authorities that arrested her repeatedly.

Despite her failing health, as she is suffering from multiple ischemic infarctions and hypercholesterolemia, the 57-year-old feminist leader was thrown in jail, and placed in solitary confinement on many occasions.

After her release from prison in February 2019, she was rearrested in October, and is currently held under a precarious Israeli law known as ‘administrative detention’. This law is inconsistent with international law and the most basic requirements of fair trial in democratic countries, as prisoners are incarcerated for prolonged periods, without charge or due process.

Between her release and re-arrest, Jarrar contributed a Foreword to my latest book, These Chains Will Be Broken: Palestinian Stories of Struggle and Defiance in Israeli Prisons. Expectedly, her articulated message was that of strength of character, determination, courage, and hope.

Below are excerpts of Jarrar’s Foreword, where she urges people around the world to “carry and communicate” the stories of Palestinian prisoners so that “someday, the walls of every prison may come tumbling down, ushering in the age of Palestinian freedom.”

The Age of Palestinian Freedom Will Come

Prison is not just a place made of high walls, barbed wire and small, suffocating cells with heavy iron doors. It is not just a place that is defined by the clanking sound of metal; indeed, the screeching or slamming of metal is the most common sound you will hear in prisons, whenever heavy doors are shut, when heavy beds or cupboards are moved, when handcuffs are locked in position or loosened. Even the bosta — the notorious vehicles that transport prisoners from one prison facility to another — are metal beasts, their interior, their exterior, even their doors and built-in shackles.

No, prison is more than all of this. It is also stories of real people, daily suffering and struggles against the prison guards and administration. Prison is a moral position that must be made daily, and can never be put behind you.

Prison is comrades — sisters and brothers who, with time, grow closer to you than your own family. It is common agony, pain, sadness and, despite everything, also joy at times.

In prison, we challenge the abusive prison guard together, with the same will and determination to break him so that he does not break us. This struggle is unending and is manifested in every possible form, from the simple act of refusing our meals, to confining ourselves to our rooms, to the most physically and physiologically strenuous of all efforts -, the open hunger strike. These are but some of the tools which Palestinian prisoners use to fight for, and earn, their very basic rights, and to preserve some of their dignity.

Prison is the art of exploring possibilities; it is a school that trains you to solve daily challenges using the simplest and most creative means, whether it be food preparation, mending old clothes or finding common ground so that we may all endure and survive together.

In prison, we must become aware of time, because if we do not, it will stand still. So, we do everything we can to fight the routine, to take every opportunity to celebrate and to commemorate every important occasion in our lives, personal or collective.

I am honored to be part of this book, sharing my own story and writing this preface.

In this book, you will delve into the lives of men and women, read intimate stories that they have chosen to share with you, stories that may surprise you, anger you and even shock you. But they are crucial stories that must be told, read and retold.

The stories in this book are not written to shock you, but rather to illustrate even a small part of the daily reality endured by thousands of men and women, who are still confined within high walls, barbed wire and metal doors. When you read this book, you will have a frame of reference that will enable you to imagine, now and always, what life in an Israeli prison is like.

And every story, whether included in this book or not, is not a fleeting experience that only concerns the person who has lived it, but an event that shakes to the very core the prisoner, her comrades, her family and her entire community. Each story represents a creative interpretation of a life lived, despite all the hardship, by a person whose heart beats with the love of her homeland and the longing for her precious freedom.

In actuality, these are not just prison stories. For Palestinians, the prison is a microcosm of the much larger struggle of a people who refuse to be enslaved on their own land, and who are determined to regain their freedom, with the same will and vigor carried by all triumphant, once-colonized nations.

The suffering and the human rights violations experienced by Palestinian prisoners, which run contrary to international and humanitarian law, are only one side of the prison story. The other side can only be truly understood and conveyed by those who have lived these harrowing experiences.

This book will allow you to live part of that experience by briefly touching the inspiring human trajectory of Palestinian men and women who have subsisted through defining moments, with all of their painful details and challenges.

Here, you can imagine what it feels like to lose a loving mother while being confined to a small cell, how to deal with a broken leg, to be left without family visitation for years at a time, to be denied your right to education and to cope with the death of a comrade.

While you will learn of the numerous acts of physical torture, psychological torment and prolonged isolation, you will also discover the power of the human will, when men and women decide to fight back, to reclaim their natural rights and to embrace their humanity.

Indeed, these are the stories of men and women who have collectively decided never to break, no matter how great the pressure and the pain.

I would like to conclude by saluting every female and every male prisoner who are eagerly awaiting the moment of their freedom and the freedom of their people. I salute those whose stories are written in this book and I thank them for allowing us a window into an intimate, painful chapter of their lives.

As for those whose stories were not conveyed here, simply because there are thousands upon thousands of personal narratives left untold, you are always in our hearts and minds.

Dear reader, please play your part, by listening to and conveying the stories of Palestinians, whether of those who are captive in Israeli prisons or those suffocating under Israeli occupation. Carry and communicate their message to the world so that, someday, the walls of every prison may come tumbling down, ushering in the age of Palestinian freedom.