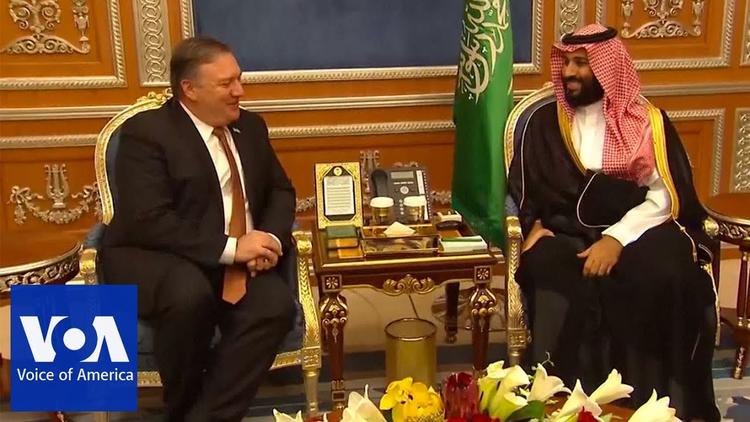 Then the State Department issued a statement on Wednesday that said,

“Secretary Pompeo and the Crown Prince focused on the need to maintain stability in global energy markets amid the worldwide response . . . The Secretary stressed that as a leader of the G-20 and an important energy leader, Saudi Arabia has a real opportunity to rise to the occasion and reassure global energy and financial markets when the world faces serious economic uncertainty.”

Brent crude (the international standard) was $26.46 a barrel Wednesday afternoon and in the US, West Texas Intermediate (WTI) traded at $23.47. Both were down a couple points from Tuesday. Brent crude had been about $60 a barrel on January 1.

Pundits had widely pointed out that the halving of oil prices was one economic piece of good news for American consumers, who, when they can begin commuting again, will have substantially lower transportation costs.

The secretary of state, who supposedly is working for those American consumers, is attempting to strong-arm Saudi Arabia into lowering their petroleum output and raising gasoline prices again, taking away from the US consumer that one consolation in dire times.

Just as Trump is contemplating killing your grandma to get the economy going again, Pompeo is plotting to hurt your bottom line at the pump. Both on behalf of the big corporations.

Prices are ‘way off because of the slowing of the world economy owing to the coronavirus pandemic. Fewer people are driving and fewer trucks are on the road, reducing demand for petroleum, which is mainly used for transportation. Demand is down by a third in Italy and France. The world typically uses about 100 million barrels a day of petroleum, but right now that has fallen to only 80 million b/d. It is death out there. But at the same time, Saudi Arabia is attempting to discipline Russia, which had refused to join OPEC in reducing production to support prices. The Saudis are pumping extra oil and flooding the market. The hope is that Russia will feel the pain of very low prices and become a responsible member of OPEC+ in the future. At the same time, both the Saudis and the Russians want to drive American hydraulic fracturers or frackers out of business.

Pompeo is clearly not acting in the interests of the average American. Rather, he is behaving as the Kansas oilman he has always been. Koch Industries had a 20% stake in Pompeo’s first company, Thayer Aerospace, founded in 1998. In 2006, Pompeo rose to become president of an oil services company also partnering with Koch Industries. During his career as a representative in the House 2009-2018, before Trump picked him up and moved him into the executive, Pompeo received $1,152,510 from the oil industry, and $380,000 from Koch Industries in particular.

Back in the old British Empire in India, Indian soldiers or sepoys who fought for the British East India Company were given a ration of salt. It is deathly hot in India from the spring into fall, and dehydration is a killer. A daily ration of salt for water retention was necessary if a soldier hoped to stay alive. Back in the late 18th century, a bevy of Rajas, Nawwabs, and British officers competed for good troops. If he proved loyal to his first commanding officer and declined to switch services, he was said to “follow his salt,” i.e. to stay dedicated to the authority that had kept him from dehydration.

Pompeo is following his salt, like a good Indian sepoy.

The US oil majors and smaller players like Koch Industries, along with all the companies involved in hydraulic fracturing, are being tossed about, as I put it a couple of weeks ago, “Like a toothpick in a Tsunami.

Alex Longley and Javier Blas at Bloomberg say that

“traders are buying the cargoes to store them. The oil market has flipped into what the industry calls a contango: spot prices are lower than forward prices. The contango allows traders to buy physical crude, store it, and make a profit by selling forward.”

The trick is that storing the crude for the future can only go on so long. In about 9 months, there won’t even be anyplace left to store the unwanted petroleum.

Saudi Arabia, they say, could be reduced to peddling its oil at Rotterdam for $15 a barrel in April if the trade war and drop in demand continue.

As for the frackers, who pump water under pressure deep into the earth to break up rocks and free small petroleum deposits for drilling, they are in big trouble. Some of those companies are deeply in debt, and they used their petroleum deposits as collateral. Since the collateral is worth half what it was, the banks will call in the loans, and the frackers will face bankruptcy. Moreover, fracking isn’t economical at $26 a barrel. If prices stay low for a year, even the petroleum industry’s deep pockets won’t keep it from taking a huge hit.

Fracking releases enormous amounts of methane, a dangerous greenhouse gas responsible for some 25% of the earth’s current heating, and it is environmentally destructive, leaving behind ponds of toxic water.

Pompeo is trying to save Big Oil and the frackers from their predicament by leaning on Saudi Arabia to stop its dispute with Russia and to reconsider its play to flood the market in April.

In so doing, he is giving the finger to American commuters, who will eventually go back to work and would welcome the lower cost at the pump.