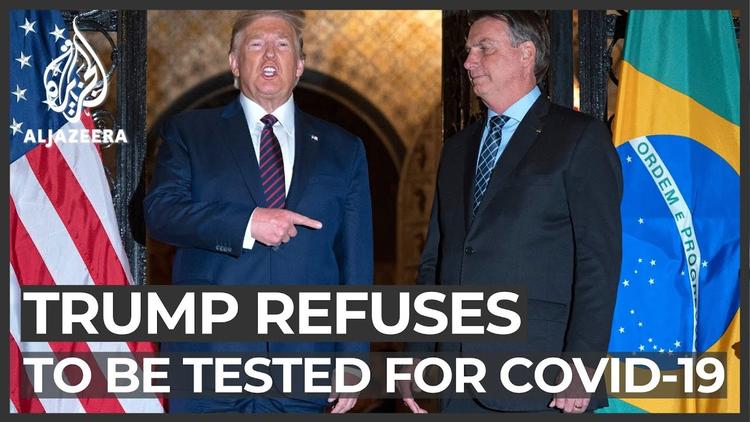 Sao Paulo (Special to Informed Comment) – Last weekend, President Donald Trump met with Brazilian President Jair Bolsonaro for a private dinner in Mar-a-Lago, his personal residence in Palm Beach, Florida. It turns out to have been less a state dinner and more a disease vector.

Ironically, both leaders had stubbornly refused to acknowledge the seriousness of the Coronavirus pandemic, which was barely discussed during the dinner. But at that very moment they were, without knowing it, exposed to the virus during their encounter. It turns out one of President Bolsonaro’s aides, Fábio Wajngarten, as well as Brazil’s Chargé d’Affaires Ambassador Nestor Forster, had the disease and didn’t know it until after they went back to Brazil and started experiencing symptoms. It was too late, though: every single guest at that dinner had already been exposed to the virus.

While in the presence of a person breathing out the virus with every breath, the two leaders blithely discussed commercial cooperations between the two countries, the Middle East, socialist regimes in Cuba and Venezuela and the moving of the United States Embassy to Jerusalem.

When asked about the possibility of the new tariffs the US might impose on the Brazilian steel and aluminium, President Trump said he is not making any promises regarding the subject, choosing instead to focus on his bromance with Bolsonaro, reportedly saying that “both countries have a real good relationship, and their friendship is probably the strongest it has ever been”. When the reporter from the Brazilian newspaper O Globo repeated his question regarding the tariffs, Trump insisted he would make no promises.

Ironically, days after going back to Brazil and when asked about the Coronavirus pandemic, President Bolsonaro declared it was “no more than a fantasy” and that the media and the World Health Organization (WHO) were “going too far” when declaring it a major world problem. Before declaring it a national emergency, President Trump also refused to face reality as it is and even said he was not going to be tested for the virus; most recently, during a pronouncement about Coronavirus in the gardens of the White House, the president said he “might” be tested, but not because of last week’s encounter with President Bolsonaro. He finally folded and had himself tested on Friday.

Also on Friday, President Bolsonaro declared through his social media pages that his tests had been “negative”; thousands of loyal followers and voters whom Mr. Bolsonary had systematically misled celebrated the results, writing comments such as “thank God” and “God is protecting you, Mr. President”. Earlier that day, Fox News and other networks had wrongly issued statements declaring that the president had tested positive for the disease. Still, because four people who were in Mr. Bolsonaro’s entourage to the United States currently have Coronavirus, an aide close to his son Eduardo Bolsonaro said that the president and his whole family might be tested again in a few days.

In contrast with Trump, Bolsonaro has yet to declare a state of emergency or to issue any comments on whether more money will be provided to be Health sector.

Their remarks during the past week show that both leaders are in a profound state of denial, and more worried about their own carefully cultivated macho image and political future than about the health of the millions who could be infected because of their inaction.