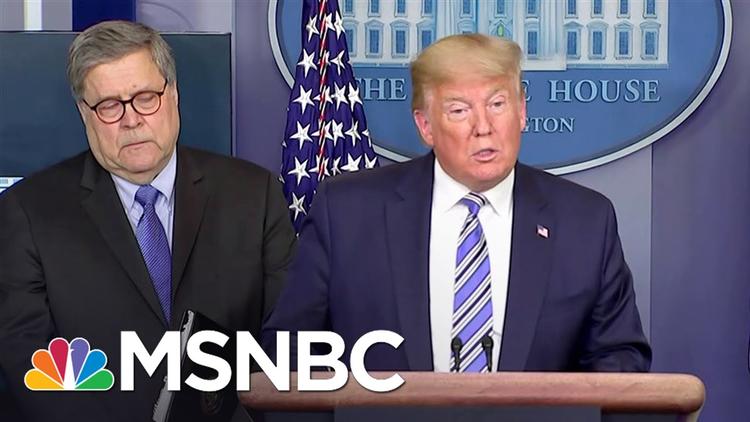 Ann Arbor (Informed Comment) – Trump’s daily dog and pony show, which he holds at 6-8 pm every evening to catch audiences tuning in for the day’s news and reach families after supper, took a dire turn on Monday. The big cable news networks irresponsibly just turn their screens over to Trump, who spews a litany of falsehoods that endanger people’s lives. Make no mistake, cable news is behaving this way for ratings and entertainment value. Their executives don’t give a fig that Trump is endangering the lives of very large numbers of people.

Ominously, Trump appeared Monday evening without the feisty and upright Dr. Anthony Fauci, perhaps the one trustworthy epidemiology expert on Trump’s team. The NYT reports that White House aides are saying Trump is increasingly angry at Fauci’s refusal to fall in line with the president’s arrant falsehoods and ridiculous rants.

But it is more than a matter of personality. Fauci and the US medical establishment are devoted to saving lives. Trump is devoted to making a profit. Fauci favors a policy of isolating people from one another to keep the novel coronavirus from spreading so fast and infecting so many people that it overwhelms the medical system, which does not have enough respirators or intensive care units to deal with a pandemic.

Trump was somehow convinced to go along with this policy for two weeks, but now is increasingly restive. At his news conference on Monday, he kept saying that Fauci’s cure was worse than the disease. Unfortunately for the country, Trump is a hotelier, and his own businesses are being badly hit by the pandemic. Moreover, leaks by aides to journalists allege that he is deathly afraid that a prolonged period of social isolation in the US will put the economy into a deep recession and sink any chance he had of being reelected.

He is therefore reverting to his ostrich-like policy of January, February, and the first part of March, during which he called the virus a “hoax,” said there were only fifteen cases, predicted it would disappear quickly, and generally denied that anything needed to be done. If in January he had ramped up testing the way South Korea has, and instituted contact tracing for those testing positive, our present lockdown could have been avoided. But Trump did not do those things.

He now wants to go back into denial mode, as Josh Dawsey, Yasmeen Abutaleb, Jeff Stein and John Wagnergo report at WaPo.

Trump keeps pointing to the number of people who will die from ordinary flu every year, and from suicide. The Centers for Disease Control estimates US flu deaths from last autumn to present as 23,000 – 59,000 (the estimate with a range is necessary because US flu surveillance is imperfect). In 2018 in the US there were 48,344 suicides. Trump actually went so far as to suggest that suicides could spike higher than coronavirus deaths because of depression from social isolation. In the past he has also mentioned the toll of auto crashes; in 2018, that death toll in the US was 36,560.

Trump’s examples all have two things in common. First, they are instances in which there is a certain rate of death that society is willing to put up with. Measures could be taken to reduce auto collision deaths, but they would make cars more expensive or slow down traffic, and Trump is implicitly arguing that society has chosen to accept this death rate to avoid those costs.

Second, the examples he chose have nothing at all in common with the pandemic deaths, because a pandemic grows exponentially, whereas the deaths from the three causes Trump instanced are relatively stable year on year.

The coronavirus is new, and so the US population has no antibodies for it. When people meet a new disease, their t-cells cannot recognize it. The virus can therefore colonize the stricken person’s cells to make more of themselves, and their immune system doesn’t at first know how to fight back. After a while, the t-cells learn the shape of the invader and can therefore glom onto it and kill it. Influenza is an old disease and almost everyone has some immunity to it, which along with the annual vaccine, keeps it from growing exponentially.

But the novel coronavirus will grow exponentially if steps such as social isolation and large-scale testing and contact tracing are not implemented (China resorted more to the first, South Korea more to the second). Contact tracing means finding people who test positive and making them quarantine, but also going back and quarantining everyone they came into contact with.

The reality is considerably more complex and substantially slower (the doubling time is more like 6 days), but you get the picture. An exponential progression does not look like auto collisions, or suicides, or influenza.

Another important issue is that the cases and deaths we’re seeing now reflect the infections of two weeks ago. Things are not settling down, and won’t– the exponential growth is already baked in.

Some 12 percent of those who are infected seem to need to go hospital, and in the exponential model nearly a million Americans would need a ventilator over the course of the outbreak. There are about 170,000 ventilators in the US, so the only hope those million Americans have is not to all get sick at once.

Not having everyone get sick at once is the point of social isolation or South Korea-style contact tracing, which slows down the doubling rate of the exponential progression.

So if Trump is so antsy to get people back to work, he should look into the South Korea model and quickly and vastly ramp up the production and distribution of test kits so we can figure out who has been exposed and just have them do the quarantine. Of course it is rather late for that, but better late than never.

But I have a sinking feeling that Trump is going to do nothing about ramping up test kit production. Some allege he wants to make sure the Kushners’ firm makes the test kits and earns the money off them, hence the delays.

Certainly, the cure is not worse than the disease, in the sense that a deep economic recession such as we had in 2008 is not worse that losing two million dead (the upper end estimate of some medical modellers). But I also have a sinking feeling that the billionaires have crunched the numbers and decided that the loss of 2 million elderly Americans would be worth it for their bottom line.

I think they are wrong about this, because you can’t have a normal economy if the pandemic is running wild, anyway. But they are used to getting what they want, and are contemptuous of the lives of the little people– which is why they have striven so hard to destroy Obamacare so as to save themselves from having to pay taxes for it.

Trump, in other words, combines in himself the worst dimensions of plutocracy and looniness, and the American people will rue the day they decided to give him the levers of power for the whole country.