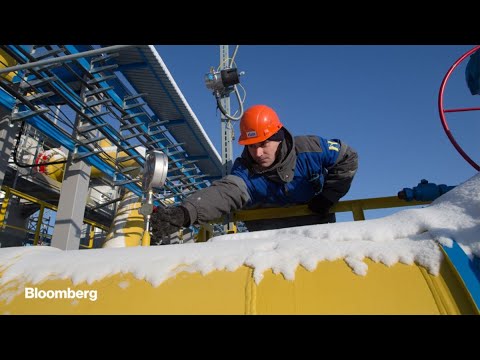 Ann Arbor (Informed Comment) – Last weekend, OPEC Plus, an expanded cartel of petroleum exporters, considered a plan for members to cut back on their oil production so as to support prices in the face of a slowing world economy owing to the novel coronavirus. The Russian Federation rejected the plan put forward by OPEC, insisting on continuing to export around 5 million barrels a day and on retaining its market share. The Saudi leaders, furious at Moscow’s intransigence, decided to flood the market by cutting prices for favored countries like China and announcing a production increase to over 10 million barrels a day beginning April 1. That is the date that the current OPEC agreement on production quotas runs out.

The Russian resistance appears to have derived from fears that if they cut back exports and OPEC managed to keep the price high, US petroleum firms using hydraulic fracturing (fracking) would simply rush in to grab Russian markets in Europe.

BBC Monitoring translated the statement of Mikhail Leontyev the press secretary of the Russian oil giant, Rosneft, to the RIA Novosti news agency. He said Sunday after the OPEC Plus talks failed,

“From the point of view of Russia’s interests this deal is simply senseless. We are relinquishing our own markets, removing cheap Arab and Russian oil from them, in order to clear a space for expensive American shale oil and ensure the effectiveness of its production. Of course, even in the current conditions it could have been possible to reach some sort of agreement with partners. But the proposal that was made was not partner-like. Our volumes are simply replaced by the volumes of competitors. This is masochism.”

So the theory that Russia provoked the price fall to harm US fracking companies is incorrect. They provoked it to avoid being harmed by the American producers, as they saw it.

Russia seems to have felt that the Saudi-OPEC proposal for production cutbacks was just too severe, and would only benefit the Americans. Fracking oil is relatively expensive, involving pumping water underground under high pressure. Infopedia explains that the average fracked well seems to have a production cost of $60 a barrel, although some fields can be exploited for as little as $40 a barrel. Fracking is an environmental disaster, leaving behind pools of polluted water and contributing to global heating by releasing masses of methane and by providing further petroleum to the world market. When burned, it releases heat-trapping carbon dioxide into the atmosphere. New York state has banned fracking.

In contrast, Saudi production costs are about $2.80 a barrel. So when Saudi Arabia sells a barrel of oil for $70 a barrel, it is making way more money than Occidental Petroleum, which has the upfront costs of $40 to $60 barrel. Still, if you sell a million barrels at a $10 a barrel profit, that is $10 million, which is better than a kick in the head.

But at Monday’s closing price of $36 a barrel, very few if any American fracked fields are making money, as Alexander C. Kaufman at HuffPost shows. Moreover, petroleum extraction has not been attracting much investment because a) it is embarrassing for investors to be known to be putting money into wrecking the planet’s climate and b) European and American car companies are selling loads of new lines of electric vehicles starting in September, which don’t use gasoline. As people buy and drive them they will throw petroleum prices off a cliff.

In part because of low investment funds coming in, some companies engaged in fracking, like Chesapeake Energy Corp. and Whiting Petroleum Corp., have had to take on a lot of debt. Their stock prices cratered on Monday, which will add to their woes.

Many fracking firms will go bankrupt if petroleum prices stay low for a year or more. Those that are highly leveraged and which have seen the value of their collateral much reduced may also have loans called in. Others will be more resilient because of deep pockets (ExxonMobil) or because they hedged for 2020. If $36 a barrel becomes the new normal the next couple of years and if this price point intersects with the EV onslaught, then fracking as an industry could be over with during the next decade.

Fracking allowed the United States to bounce back as a petroleum producer from 2006. Many ordinary oil fields had been depleted in the US, so that production was down to about 5 million barrels a day in 2009. The US uses about 21 million barrels a day of petroleum, mostly to fuel transportation. Now, with fracking, the US produced 12.1 million barrels a day in 2019. Although fossil fuel boosters keep saying that the US is now a net exporter of petroleum, that is ridiculous. It still imports about 9 million barrels a day more than it uses. And while it does export some oil, that is because it is cheaper to send Alaskan crude to, say, Japan, than to send it to New York. But then an equal amount is imported from places like Nigeria and Saudi Arabia. Also, there is a difference between petroleum and “petroleum products” such as distillate fuel and jet fuel. That is a minor part of the market, and in that small niche, the US did in December export slightly more than it imported. But the US is still very much dependent on imports for crude petroleum. If fracking ceases being profitable because of sustained oil prices of $36 a barrel, US production will shrink significantly.

In any case, the extra US production of some 7 million barrels a day over what was possible 15 years ago has contributed to keeping oil prices much lower than their 2014 high of $110 a barrel. Moreover, the US firms have horned in on the market share of other producers, creating resentments all around. And the US is increasing production by a million barrels a day, so that if that goes on it really will be reducing both price and market share for Russia and Saudi Arabia.

In countries like Russia and Saudi Arabia, petroleum underpins their economies. Oil and gas constitute 30 percent of the Russian gross domestic product; for Saudi Arabia they are 50 percent of GDP. They are thus in a 15-year race to make as much money off their petroleum as they can before its value declines precipitously with the electrification of transportation and the shift to wind and solar.

That is the reason for which market share is more important to Moscow and Riyadh than simple profits per barrel, which are in a long-term downward spiral any way. Say you had a million widgets that cost you a dollar each, which you had been selling at $10 a widget. Let’s say you know that widgets will be worthless in 15 years. And lets say someone came along who would sell the widgets for $8 apiece, but couldn’t go lower because they make them for $7 apiece. So what would be a logical move? Sell your widgets for $6 apiece, take the $5 profit on each, and drive out the competition so that you can sell all million widgets quickly before anyone realizes how worthless they are about to become.