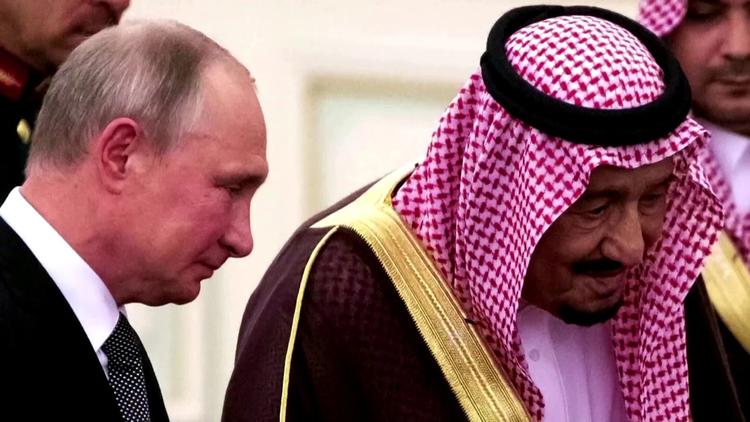 ( Middle East Monitor ) – When Saudi Arabia approached members of the Organisation of Petroleum Exporting Countries (OPEC) and its affiliates recently to cut oil production in an attempt to cushion the impact of the falling oil prices as a result of Covid-19, Russia rejected the proposal. The subsequent spat between Moscow and Riyadh saw the Saudis and the United Arab Emirates increase oil production in an effort to punish Russia. This increase has led to record low prices in the industry, with the price per barrel plunging to an 18-year low of less than $28.

Notwithstanding the possible loss of revenue as a result of increased oil production, Russia — a significant oil producer in its own right — stood its ground, much to the annoyance of Saudi Arabia’s de facto ruler, Crown Prince Mohammad Bin Salman, who threatened to increase the Kingdom’s oil production further if Russia failed to yield. Why did Russia reject the Saudi proposal which was intended to benefit all oil producers, not just Saudi Arabia?

While the reduction in volume would certainly have helped OPEC countries recoup lost profits, particularly the smaller oil producers, Russia’s concern was that cuts could mean a possible loss of market share, with US producers filling the gap. Moreover, Saudi Arabia’s plan was seen by Russia as an attempt to assist Donald Trump to meet his economic and political challenges in the US. Trump and his allies on Capitol Hill are fully aware of the problem: the fortunes of many of the president’s wealthy supporters in the industry are on the line, as are the jobs of workers concentrated heavily in red states like Texas, North Dakota and Louisiana.

Since the US is not a member of OPEC, it would have not been bound by the terms of the proposed Saudi deal but would have benefited from the shortfall in global oil supply and agreed price. The change in course would give American companies room to reduce production gradually on their own terms, without government or regulatory mandates, as they invest far less in exploration and production.

The increase in oil supply and subsequent drop in price have been good for those countries that import it, giving them a chance to build up their stockpiles, which will most likely have an impact on the demand of oil in the foreseeable future. However, for oil producing countries, especially the smaller producers, the situation has been a disaster. Many have failed to diversify their economies over the years and are still dependent on oil exports. As such, the continuing instability in oil production has forced many to slash national spending. Saudi Arabia, the most influential of OPEC’s 12 member states, actually needs oil to be at $106 a barrel in order to break even after the costs of its generous welfare programmes and energy subsidies are taken into account. The Kingdom will be forced to plunder its financial reserves to fund its bloated budget if the price of oil plummets further.

A deal was finally brokered which enabled Russia and Saudi Arabia to get back to the negotiation table. Consequently, members of the OPEC cartel and its allies have agreed to withhold almost 10m barrels a day from next month, not least because the coronavirus pandemic has devastated the demand for fossil fuels.

The lesson to be learnt from this experience is that the client-state relationship between Saudi Arabia and the US under President Donald Trump is dangerous for world stability. The re-election of Trump in November will almost certainly mean the continuation of the status quo, which should be a major concern.

Saudi Arabia has still not accounted for the brutal murder of Jamal Khashoggi in 2018 and has at best treated those demanding justice for Khashoggi and his family with disdain. Furthermore, a couple of days ago, Saudi activist Abdul Rahim Al-Hwaiti was killed in a hail of bullets at his home in Al-Khraybah, in the north-west of the Kingdom. He was a member of the powerful Al-Huwaitat tribe spread across Saudi Arabia, Jordan and the Sinai Peninsula.

The tribe’s presence in the region for more than 800 years predates the Saudi Kingdom by many centuries. Al-Hwaiti has been protesting against what he regarded as his forcible removal from his ancestral land to allow the Saudi authorities to develop a mega city known as NEOM in the province of Tabuk. The city is expected to be a hub for new housing, business, science research and other industry. It is a pet project of Bin Salman which has been described as “crazy”.

The brutal killing of Al-Hwaiti and the unnecessary disagreement between Saudi Arabia and Russia are but two examples of what Bin Salman can get away with under Trump’s protection. His increase of oil production levels at the expense of OPEC members was unprecedented. The Crown Prince was basically willing to gamble with other countries’ national budgets in order to pursue a vendetta against Russia. As with the murder of Khashoggi, Bin Salman has again been allowed to act with impunity, demonstrating the toxicity of the relationship between the Kingdom of Saudi Arabia and the United States of America. This should be a huge concern for everyone in the Middle East and, indeed, the rest of the world.