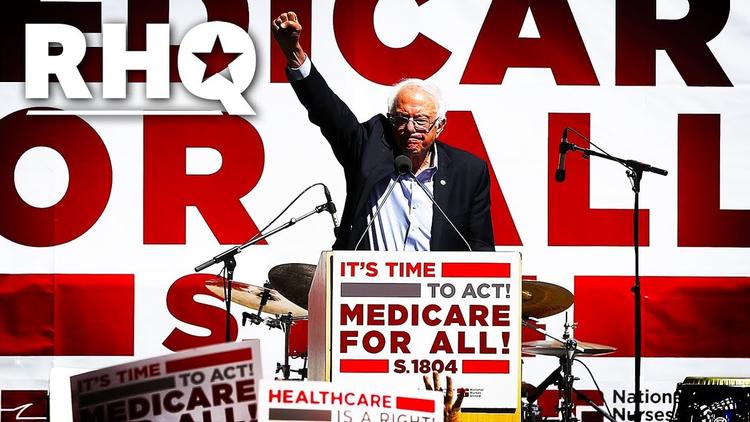 ( Waging Nonviolence) – Surprisingly, for a mainstream daily newspaper, the Philadelphia Inquirer ended its March 22 editorial on the coronavirus by calling for system change, writing, “This crisis has laid bare some hard truths: that we’ve built a society that has removed protections for workers, supported the creation and growth of the gig economy, kept wages low and has continued to shrink basic supports for essential needs.”

The editorial went on to call the COVID-19 epidemic “a public health emergency that has exposed the weaknesses inherent in the system as a whole,” and say “It’s clear the system will have to be rebuilt. We only hope that can begin in the near future.”

A big-city, mainstream editorial board is talking “system change.” We activists need to be able to answer such an invitation not with piecemeal policies, but with a system alternative — one that delivers what the pandemic has shown that we need.

The most attractive starting point in such a discussion, I’ve found, is the political economy of the Nordic countries. They’ve generated more shared prosperity, justice, climate adaptation and individual freedom than anybody.

In response to the coronavirus, Denmark reached into the socialist planning toolkit to take a bold economic initiative. The Danish plan to maintain jobs — which I described in my first article of this series — was lauded the next day by The New York Times!

The editorial board prefers Denmark’s employment “freeze” strategy to that of the U.S. government’s bailout approach, which has an almost-equivalent price tag. The editorial’s headline is a direct challenge to Congress: “Why Is America Choosing Mass Unemployment?”

It can be hard for activists to keep track of how the ground is shifting beneath our feet, giving us a new opportunity. Some of us who want more radical change than the Nordics have so far achieved may fall back on our critiques of those countries: not racing fast enough to zero carbon emissions, still retaining armies, not yet fully empowering workers in firms outside the coop sector.

But the Scandinavians are the first to tell you they don’t live in utopia, and radicals there work to leap even farther ahead. Consider the remarkable initiative of Greta Thunberg.

In the United States, where activists are embedded in a climate-denying empire that structures in poverty and entrenched domination by the economic elite, the awakening of our fellow citizens to the possibility of something much, much better offers a breakthrough moment.

It’s in the interests of the 1 percent that we not use the Nordic model as a way to talk about vision. They’ve watched with alarm the growing public appeal of Medicare for All and the Green New Deal, which are partial versions of the Nordic model. Especially now, they don’t want us to expand, to talk in an appealing way about system-change.

Efforts to ‘head us off at the pass’

Seeing the attractiveness of the Nordics to Americans, liberal establishment pundits have been swinging into action. In the first article of this series I described their new rhetorical strategy. Here, I want to analyze another example of that strategy: a famous journalist — Thomas Friedman of The New York Times — claiming that “Joe Biden, not Bernie, Is the True Scandinavian.”

Co-optation seems to be the goal of Friedman’s recent column. He argues that the United States and Nordic countries already share the same model: a market economy. He acknowledges that Denmark, for example, has a superior social safety net compared to ours, but sees such an arrangement within our reach if led by liberals like Biden who believe in the wealth-producing character of free enterprise.

In his column, Friedman doesn’t explain why Denmark — with historically far less wealth than the United States — has enjoyed its safety net for over half a century while the United States doesn’t even try to build it here. Biden, for example, opposes the Danish single-payer healthcare system for Americans despite its consistently superior results.

Friedman demands that Bernie Sanders choose either the free enterprise system or central planning, i.e. “socialism.” By posing this either/or, Friedman claims something he wouldn’t do in describing an automobile: Cars must be powered either by gasoline or by electricity — no hybrids allowed.

Happily for Nordic economists, Friedman’s either/or is a false choice. Nordics mix what they see as the positive features of both approaches. They believe a market for trading some goods and services can be a good thing; it’s flexible and doesn’t ask planners to be God. For some purposes, like health care, a market is terrible. Be pragmatic: Research to find out where the market can be useful.

Planning is also a good thing, because it can set goals that support the well-being of the whole, and can structure the market in a way that prevents it from wrecking people’s lives.

For example, the Nordics redesigned their economies with a goal of abolishing poverty, realizing, as I show in a chapter in my book “Viking Economics,” that no one method will do the job. They replaced means-tested services — what we call “welfare” — with universal services, and a whole lot else besides. Through evidence-based planning, they’ve almost abolished poverty, while the free-market United States, mired in poverty for all its wealth, has an establishment that vetoes what works.

In another example of planning, the Norwegians distinguish between what they call the “real economy” and the financial sector. Norway designed its hybrid so its stock market stays small and can’t distort the real economy. There’s also the precaution of Norwegian public entities like governments owning about a third of the stock market.

Norway refuses to join the European Union partly because of EU loyalty to the free market. Norwegian family farmers would virtually disappear. A majority of Norwegians value their family farmers, for cultural reasons and food security.

For the Nordics these are design decisions, like hybrids and plug-in cars are. A professional association of Nordic economists invited me to Norway to keynote their international conference, and I found them to be very pragmatic. They appeared to me to be people who would rather be like engineers or architects than preachers.

Like architects, they ask their client what its priorities are. In actual free market countries like the United States, the client is capital. In the Nordic model, however, the client is the common good, as expressed through democratic discussion and decision.

Friedman quotes former Danish Prime Minister Lars Lokke Rasmussen saying at Harvard’s Kennedy School of Government, “I would like to make one thing clear: Denmark is far from a socialist planned economy. Denmark is a market economy.”

It’s strange to hear a Danish leader resort to that false dichotomy. But the Nordics are small countries trying to manage alliances with large countries in a complex world. Their spokespeople are usually diplomatic, minimizing differences and maximizing commonalities.

Their political discourse is also quite different from ours because their spectrum is skewed to the left. To over-simplify a bit, among the major players in Nordic politics, the so-called “right wing” has the politics of the Democratic National Committee in the United States.

I wish journalists reporting from the Nordic countries made that clear to U.S. listeners. After a Nordic election, when journalists report that “the political right gained seats in parliament,” it’s the equivalent of saying that “the election showed growing strength by moderate Democrats” in the United States.

I remember a Norwegian Conservative Party leader telling me she wished Barack Obama were Norwegian since he would be a splendid member of her party.

A century ago Denmark was, in truth, a free market economy, like the United States. Rasmussen’s modern-day political economy is hugely different from those days, but it’s understandable that he would minimize the difference from the United States when he was speaking at Harvard.

Friedman tells us he was invited to a Danish retreat at the prime minister’s residence where he found “all the country’s stakeholders — corporate leaders, national union leaders, educators, social entrepreneurs and cabinet ministers” gathered to think together about the future of Denmark. He was amazed by a conversation that took into account the “balancing of all their interests” and wishes he could find that here.

A century ago Friedman would not have found that assembly in the prime minister’s house. In 1920 the Nordics genuinely had free market economies. The economic elites ran those countries, with no intention of giving up their privilege and dominant position.

What changed? Friedman claims the Nordic model is a triumph of evolution, not revolution, but the real story is quite different.

In Nordic history as in our own, the economic elite used every trick — even calling out the troops — to maintain its power and privilege. (See my description of the Danish mass struggle in my first article in this series.)

The history of the largest of the Nordics, Sweden, also contradicts Friedman’s impression. In the early 1900s farmers organized co-ops and industrial workers organized unions. When Swedish employers decided to reduce wages in 1909, hundreds of thousands of workers resisted by going on strike, without success. Conflict continued between the rich, who made the decisions, and the farmers and workers, who were tired of insecurity, long work days and poverty. Unwilling to give up, socialist-inspired workers discussed their emerging vision of an alternative, just system — with input from outstanding economists like Nobel-prize winning Gunnar Myrdal.

In 1931, in southern Sweden, 4,000 striking lumber mill workers picketed the owners and the political authorities who backed them. National soldiers were mobilized to crush the strike, killing five and injuring five more. Thousands attended funerals of the slain workers.

The workers’ grief and outrage might have become a moment to turn to violence, but instead the alliance of labor unions called a massive general strike throughout Sweden. The government fell.

An election was called and Swedes elected the Social Democrats in 1932, who began to implement the Swedish version of the hybrid Nordic model. They proceeded to lead the country almost without a break until 1976.

In short, the conversation among stakeholders that Friedman enjoyed, now common in all Nordic countries, was made possible by successful nonviolent campaigns against the economic elite and the free market system that it owned. The common people and their allies, inspired by a democratic socialist vision, needed to generate a power shift that forced a compromise and the implementation of the hybrid model.

If Friedman wants that enjoyable stakeholder conversation in the United States — and believes it won’t take a power shift — he first needs to read the Princeton “oligarchy study,” which found that the United States makes nearly all its major decisions according to the wishes of its economic elite. To import the hybrid Nordic model to this country, Friedman would find the same resistance here that the Scandinavians tackled there.

I doubt that waging a nonviolent revolution to overthrow the dominance of the economic elite is what Joe Biden has in mind.

Reprinted with permission from Waging Nonviolence