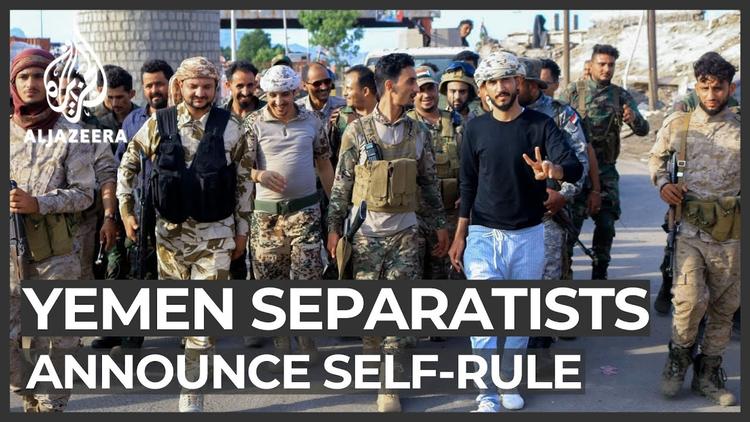 Ann Arbor (Informed Comment) – Al-Jazeera reports that the Southern Transitional Council (STC) in the Arabian Sea port of Aden has declared independence. Aden is a little more populous than Philadelphia inside city limits, at about 1.7 million, which makes it about 5 percent of Yemen’s 28 million population. The STC maintains that the Riyadh Agreement of last November on power-sharing between the Nationalist government and the STC has not been implemented.

UN Special Envoy Martin Griffiths expressed his disappointment at the development, especially since it comes at a time when the coronavirus pandemic could swept Yemen.

Its papulation is especially vulnerable given the privations of the past five years during which Saudi Arabia and its coalition made war on the country.

Reading between the lines, Griffiths is worried that the nationalists, rejecting this move by the Southern Transitional Council, will march militarily on Aden with Saudi air support, creating a whole new civil war within a civil war.

The move, which is opposed by Yemen’s nationalist government (also now largely based in the south), casts doubt on the narrative that Saudi Arabia, the United Arab Emirates, and Yemeni nationalists are in the fight to liberate northern Yemen from the Zaydi Shiite Houthi rebels. The Saudis and the United Araba Emirates have pushed the story for 5 years that they intervened to stop Iran from taking over Yemen. The Iranians, however, are nowhere in evidence, though they may have smuggled a few arms and some small amounts of money to the Houthis. Instead, the dramatic conflict now is between the nationalists and the southerners, both Sunni Arabs.

Aden’s former governor, Aidarus al-Zoubaidi, founded the STC in 2017, backed by the United Arab Emirates (UAE). Although the Emirates invaded Yemen in 2015 ostensibly to defeat the Zaydi Shiite rebels, the Houthis, who had taken over the north, it gradually instead tried to establish a UAE sphere of influence in south Yemen. This project encouraged the southerners, who were unhappy with their marginal position in the nationalist government of Abd Rabbuh Mansour Hadi, to press for greater autonomy or even independence.

South Yemen, with its capital at Aden, was independent 1967-1990 under a Communist government, the only one in the Arab world.

During the past year, severe conflict has on several occasions broken out between the southern secessionists and the nationalists, in part over the acceptance by the nationalist camp of the Muslim Brotherhood-linked Islah Party, and the establishment by the latter of bases in the South.

Although the declaration of independence was issued in the name of the Southern Transitional Council, it appears to lack the support of key members, the governors of Hadramawt, Abyan, Shabwa, al-Mahra, and the island of Socotra. It seems that only the city of Aden actually pulled out of Yemen, and if that is true then the step will not last long, since 1.7 million people in one of the poorest countries in the world is not a viable country.

Al-Zoubaidi may have acted independently in his declaration of independence, although he is usually backed by the UAE. In this case, the UAE immediately denounced the attempted secession. This condemnation may, however, be pro forma and for the sake of appearances, since if it openly backed Al-Zoubaidi’s declaration, Abu Dhabi would risk conflict with it bigger neighbor and putative ally, Saudi Arabia.

The Emirates no longer has troops on the ground in Yemen, but still gives the STC air support. Last summer the UAE bombed nationalist forces at Riyadh on behalf of its southern clients. If the UAE is genuinely opposed to this development, they could simply cut off their funding of the STC.

Emirati and Saudi aspirations to become regional hegemons by defeating the Houthis in Yemen have placed the country’s 28 million people in dire danger. The Trump administration is deeply implicated in this war effort, having supplied strategic planning and logistics. The Saudi-led war has left millions of Yemenis food insecure, and a million contracted cholera in recent years. The threat of the coronavirus sweeping through the war-torn, desperately poor country alarms everyone.