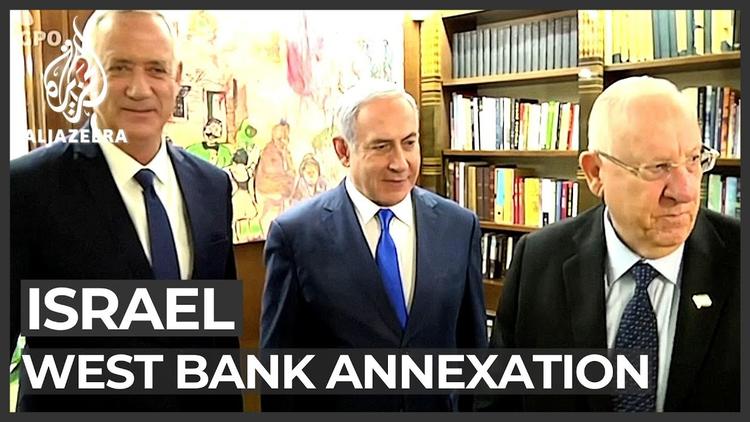 Ann Arbor (Informed Comment) – Israeli prime minister Binyamin Netanyahu said Sunday that he is confident that the Trump White House will sign off on his planned annexation of vast swathes of Palestine this summer.

Netanyahu secured agreement on the illegal annexation, reminiscent of Mussolini’s annexation of Nice from France during World War II, from his new partner in an “emergency national unity government,” Benny Gantz. They agree that Israeli sovereignty over this Palestinian territory has been granted by the Trump/ Kushner “Deal of a Century.”

The Trump plan for Palestine was plotted by New York Zionists around Kushner and was unable to secure the participation of any Palestinian, since it clearly simply screwed them over. The Trump plan is also intended to please Trump’s evangelical base, many of whom believe that only when modern Israel controls all of biblical Israel will Jesus return. They believe that then all Jews will be converted to Christianity and be taken up. How this mythology is not widely recognized as a virulent form of anti-Semitism beats me. Part of the answer is that it suits the Zionists to exploit it, and they are the ones who typically go around smearing people as anti-Semites.

Israel did not exist at Jesus’ first coming, since Palestine was a province of the Roman Empire, so I’m not sure what the origin of this belief is. Moreover, an independent Israel was short-lived and had more than one geographical configuration, the supposed big unified kingdom of David and Solomon was probably a myth (the Assyrians recorded everything and never heard of it, and the archeologists can’t find a base for a state until the 700s). Later on Judah and Israel were split at some points; and neither controlled Gaza. Trying to impose this shifting and kaleidoscopic ancient history on today for apocalyptic purposes is daft, but then there seem to be many daft people abroad in the U.S. nowadays.

Netanyahu is clearly eager to go forward with the step while Trump is still president, and perhaps shares the fears recently voiced by US Republicans that the GOP could lose the White House and even the Senate in November. Trump will go along because he will be eager to please his evangelical base in the run-up to the election.

Although Joe Biden is a one-sided partisan for Israel, he is still attached to the old idea of a two-state solution, and some sections of the Democratic Party, inspired by Bernie Sanders, are dead set against aggressive Israeli expansionism at the further expense of the Palestinians.

Netanyhau said that he is confident that in the space of only a few months, the annexation will be a reality and another triumphant moment in the history of Zionism will be celebrated. Zionism is a form of Jewish nationalism that makes the Jewish people a basis for a nation-state rather than for a private religion. Netanyahu’s Likud Party, originating in the era of mass politics between the wars, puts forward a virulent form of that nationalism with some fascist features, though so far it has been willing to contest democratic elections. Netanyahu is under indictment, however, for corruption in manipulating his press coverage and engaging in other anti-democratic acts. He is attempting to take Israel in the direction of Hungary or Russia, making it an illiberal state.

Gantz is said to secretly hope that the US will forbid the annexation, but if so, he doesn’t know Trump very well.

No international body ever awarded Israel the West Bank, and it was not a site of significant Jewish settlement in the first half of the twentieth century. Israel has no legal claim to any of it.

Although the 1967 Israeli occupation of the West Bank and Gaza was permitted by the Hague Regulations of 1907 and the Fourth Geneva Convention of 1949, the latter envisages a brief occupation during wartime, with a return of the territory once an armistice is reached. Since Israel has had a peace treaty with Egypt since 1978 and with Jordan since 1994, it should long since have relinquished Palestine, as was recognized in the Oslo peace process that Israeli prime minister Yitzhak Rabin signed off on.

Netanyahu marshaled all of his political capital to destroy the Oslo peace process precisely in order to annex the West Bank to Israel permanently and to keep Palestinians in a state of Apartheid oppression. The Fourth Geneva Convention strictly forbids flooding the Occupier’s population into the occupied territory, as Israel has done, or substantially altering the lifeways of the occupied people, as Israel has done. Under the Statute of Rome that established the International Criminal Court, Israel’s actions amount to a form of genocide.

Since Europe is weak and pusillanimous when it comes to dealing with Israeli aggression, or in some cases is simply perfidious, the issue has been left in the hands of the United States, where it has been decisively captured by the Israel lobbies and billionaires such as Sheldon Adelson.

The annexation will certainly result in a huge move in Western civil society to boycott Israel, since the annexation is a clear violation of international law. Ireland is already considering a prohibition on the importation of goods produced on stolen West Bank Palestinian land, and the International Criminal Court is considering taking up Israel’s crimes. Netanyahu has reacted to these threats by establishing a cabinet post to combat Boycott, Divestment and Sanctions, and he has threatened to destroy the International Criminal Court if it dares move against him.