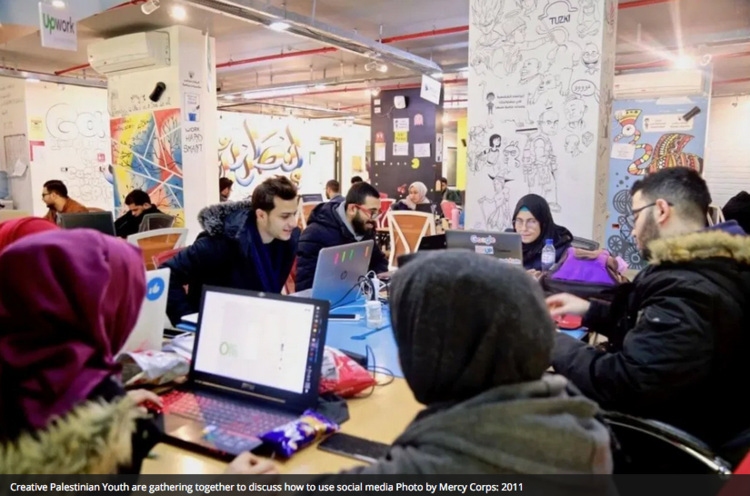 ( Middle East Monitor ) – Social media plays a vital role in transforming people’s lives. Being on social networks and blogs allows everyone to connect with others easily. This is especially so for the people of occupied Palestine, particularly those in the Gaza Strip. For Palestinians, social media is a bridge to the outside world, even as they themselves have no freedom of movement. New media has become imperative within Palestinian popular culture, as it helps to create a social landscape very different to the lived reality. It is vital to ensure a better environment and life, lending itself as it does to boosting social contacts and a wider recognition and promotion of the cultural life of Palestinian youth.

According to a 2019 report published by the StatCounter web traffic analysis site, “Approximately 65 per cent of Palestinians in the occupied West Bank and the Gaza Strip use Facebook, while more than one million use WhatsApp and more than 300,000 use each of Twitter and Instagram.”

Embed from Getty Images
A Palestinian youth holds a Galaxy displaying Facebook logo in front of the computer with the WhatsApp’s logo in Rafah in the southern Gaza Strip on February 26, 2014. (Photo by NurPhoto/Corbis via Getty Images).

Since the emergence of these social networking sites as key tools for news, Palestinian journalists have performed a key role in letting us know what is going on in the occupied territories. The daily use of Facebook and Twitter, for example, is now routine with social media being the main source of news for the Palestinians. Citizen journalists provide details of social and political events and activities for many across occupied Palestine.

One of Gazan journalist who uses his personal page on twitter to transfer news daily, Palestine: Gaza

Given the extreme circumstances in which Palestinians find themselves, it’s rare for them to have full control over their own lives. They have to jump over so many hurdles to have the kind of life that they dream of; go to the places that they want to see; and study what and where they want to.

One of the hardest challenges, however, is finding a job. Palestinian youth use social media to network and find employment. According to the Palestinian Central Bureau of Statistics, unemployment across occupied Palestine reached 33 per cent last year, compared with 31 per cent in 2018, when 351,500 people in the West Bank were unemployed, as were 219,300 in the Gaza Strip. At the moment, 47 per cent of young people in Gaza are unemployed.

READ: Hamas insists on Palestinian prisoner release in any deal with Israel

Lubna Harazin is one young Palestinian who couldn’t find a job after her graduation, so she learned various skills, employed them on social media sites and marketed herself. She now works as a content writer and voiceover artist. “I began to market myself on these sites by explaining my skills and competitive advantage that distinguishes me from the rest of the people in the same field,” explains Lubna. “During my time in this line of work, I have formed a large network of relationships and this has helped me to obtain a greater number of jobs. I am now completely dependent on my income from social media.”

Lubna Harazin at work in the studio: The Gaza Strip, Palestine

Social media platforms are used to showcase the talents of Palestinian youth despite the restrictions imposed by the Israeli occupation authorities. Sahar Redwan is a Palestinian dentist from Gaza. She is also a very talented artist, and uses her drawings to communicate with her patients. “At first, it was only for my patients and those who are close to me,” she says. “I was pleased when my patients told me that they trust me with the dentistry because ‘whoever masters the smallest details in drawing also masters the smallest details in the dental profession’.” That was when she realised that she can share her artwork with the wider world. “I use social media to let people know about my drawing skills. The occupation makes this very difficult any other way, as it is difficult to travel and communicate face to face in other parts of the world, or develop my talents to reach an international audience.”

In fact, the Israeli authorities do not hesitate to block any and all opportunities that may provide a lifeline for the Palestinian people. Israel’s fear of the strength and creativity of Palestinian youth prompted the government to ask Facebook to take action against social media posts by young Palestinians.

“The government has submitted 158 requests to the social media giant within four months asking it to remove content it deemed to be ‘incitement’,” said Justice Minister Ayelet Shaked. “Facebook granted 95 per cent of the requests.”

As the technology develops, social media has become the norm for most people. For the Palestinians, it is more than something to use for fun; it is a work tool connecting them to their fellow citizens and beyond. With social media they can circumvent the Israeli occupation and its restrictions and develop themselves and their community socially, culturally and economically. It is their bridge to the outside world. Young Palestinian students, workers, artists, movie makers and musicians can showcase their creativity and diversity in the virtual realm which has no frontiers. At last, Palestinian youth are able to meet their peers abroad; participate in their projects; and be visible and be seen. They now have a voice, and they are using it loud and clear.