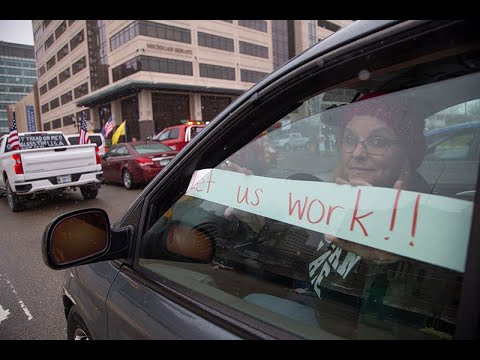 Ann Arbor (Informed Comment) – Trumpism is a form of fascism, of course, but at its core is a whiny rebellion against the achievements of human and civil rights since the 1960s. Do the new norms after the Civil Rights Movement stop people from saying in public that African-Americans, Hispanics, Native Americans, Asians and women are inferior? Then by God, Trump and Bob Mercer and Breitbart and Fox would go out of their way to put all those groups down. Did the Federal government become a champion of equality and rights? Then it needs to be kneecapped and weakened and dismantled.

The puerile rebellion syndrome of Trumpism was on full display on Wednesday in Lansing, Michigan, where angry protesters, most in automobiles, created gridlock to protest Gov. Gretchen Whitmer’s shelter in place measures, aimed at fighting the pandemic. They put lives at risk, inasmuch as rescue crews could not reach any Covid-19 patients in respiratory distress in downtown Lansing on Wednesday.

The two organizations backing the gridlock are allegedly funded in part by Trump’s secretary of education Betsy DeVos, sister of mercenary warlord Erik Prince of former Blackwater fame (a buddy of Trump’s).

Ironically, by gathering in large numbers in the state capital’s downtown, the self-described conservatives spread the deadly virus around in a wholly irresponsible way. Michigan, a state of 10 million, has nearly 30,000 cases and 2,000 deaths. The numbers seem to be reaching a plateau, as a result of Gov. Whitmer’s social distancing requirements. Models show that when restrictions on social interaction are lifted too soon, it produces a huge second wave of infections and death.

And that is what the Trumpies in Lansing were really asking for, whether they know it or not. They are behaving like vaxxers, whose reluctance to inoculate their children against deadly diseases puts everyone’s children at risk.

Some 90% of the over 32,000 coronavirus deaths in the US (as I write), could have been prevented by a government lockdown order on March 2 instead of on March 16. This is true of the past. It is also true of the future. The clueless alt-rightists in Lansing demanding “let me work” were gunning for a second, much larger, wave of deaths, thought to be fair they may not be lucid enough to consider the possibility.

Contrarianism in the service of death and inequality has characterized the movement throughout. Fox dismissed African-American chattel slavery as no worse than the indentured servitude endured by whites in the colonial period. Pro-Trump governors have tried to pull dirty tricks like requiring voter i.d. or making the formerly incarcerated pay a poll tax to vote, to keep African-Americans from voting.

Trump called Mexican-Americans rapists, drug smugglers, and white slavers.Trump calls Sen. Elizabeth Warren “Pocahontas,” as though we are living in a Jim Crow cartoon of the 1940s. Trump is entirely unapologetic about having only 3 women on his cabinet, one of them Mitch McConnell’s wife and another, Betsy DeVos, the sister Erik Prince (i.e. two of the three are there merely as a form of corruption).

This juvenile contrarianism aims to be a counter-revolution, de facto rolling back the Voting Rights Act and the Civil Rights Act and the National Environment Policy Act of 1969. All people are not equal, Trumpian fascism proclaims. The rich are clearly better, and deserve to get richer. White people are clearly better and deserve special treatment. Stupid laws that get in the way of this further enrichment of the already obscenely wealthy, whether restrictions on the burning of fossil fuels or idiotic regulations interfering with spewing toxic chemicals in the faces of children, need to be tossed in the trash can (and have been).

Do soft, pink liberals in their lofts appointed with spare Nordic furniture decry the burning of coal? By God, the screeching five-year-olds of red-faced bleary-eyed Trumpism insist that more coal be burned. There is no climate emergency, it is a Chinese hoax, just as the coronavirus is a hoax. That is what Trump called it in February, repeatedly. A vicious brutal killer that has already taken half the number of American lives that the Vietnam War did, and he dismissed it as a hoax. The warm weather in April, Trump said, would make it go away.

Trump’s determination to end social distancing on May 1, and to find ways of forcing all the governors to go along with him, is just one more childish revolt against the strictures of calm and empathetic Reason. This is fascism as Nietzschean romanticism, full of stormy passions and frantic rebellions against the constraints of the weak, feeble apostles of the Golden Rule. Nietzche’s bete noire was Socrates and his rationalism, which he blamed for killing Greek tragic theater, though Trumpism is so degraded a form of the fascist phenomenon that none of its exponents could likely explain what Socrates stood for. Dr. Fauci seems to be playing the role of the Athenian philosopher nowadays, blamed for killing the sublime Trumpian dramas of the embattled superman put on at 6 pm daily.

Nietzsche’s last years were marked by a descent into madness, perhaps the result of a syphilis infection. Trumpism is now spiralling down into insanity born of a similar promiscuity, an unwise coupling with unreason and racial supremacism and classism.