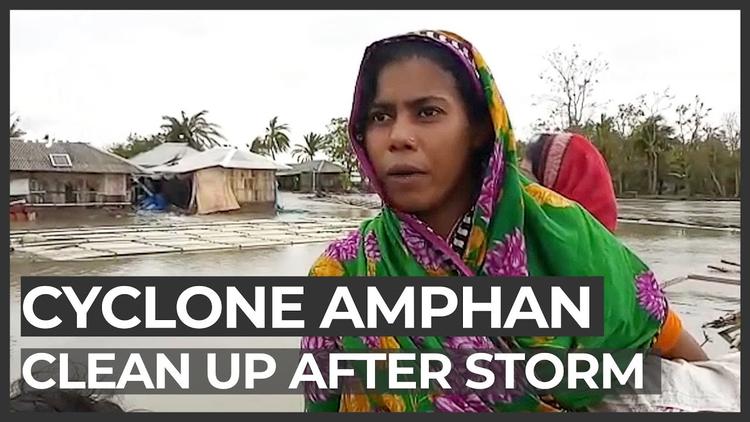 Ann Arbor (Informed Comment) – The strongest cyclone in recorded history flattened the Bay of Bengal this week, coming after both Indian West Bengal and the country of Bangladesh. Massive and successful early warning systems and the movement of 2.4 million people into shelters kept India’s and Bangladesh’s loss of life to 80 dead. That compares to half a million dead in a cyclone in 1970, and 3500 dead in 2007. The 100-mile an hour winds on landfall nevertheless destroyed thousands of homes, leaving people without shelter.

On May 18 when tropical cyclone Amphan was still out in the Bay of Bengal and before landfall, it was clocked as the most powerful tropical superstorm in recorded history.

In the areas worst hit, Alex Ward at Vox reports, 90% of clinics, community centers and businesses were destroyed. He notes that hundreds of Bangladeshi villages are underwater and a million have been left without electricity. Ward says that victims of the cyclone are refusing to go to shelters where they might get government help because they are afraid of contracting Covid-19 among the crowds there.

The cyclone not only created vast swathes of displacement, homelessness and misery, it worsened already-existing crises. India and Bangladesh are now beginning to be hit hard by the coronavirus, which could be spread by millions of persons on the move to escape the cyclone.

India surged by 6,000 new cases to 118,000 covid-19 patients yesterday. In a country as large and poor as India, these are likely vast undercounts.

Some Rohingya refugees from Burma (Myanmar), chased from their homes by militant Buddhist mobs, were directly in the path of the cyclone.

Scientists found in a recent study that cyclones and hurricanes with 115-hour winds are 15% more likely now than they had been in the 20th century.

In India’s equivalent of the Everglades, the Sundarbans, the cyclone brought in salt water and ruined crops. Many Indians living there were trapped and hungry, unable to flee to the megacity of Kolkata (Calcutta) because of travel restrictions imposed to deal with the pandemic.

Tropical storms feed on warm ocean water and high levels of moisture in the air. Oceans have been heated by greenhouse gases like carbon dioxide and methane, which trap the heat of the sun’s rays and prevent them from radiating back out into outer space.

The amount of heat-trapping carbon dioxide in the atmosphere has risen from 270 parts per million in 1750 to 410 ppm today. This accumulation came about because human beings have burned enormous amounts of fossil fuels such as coal and petroleum in the past two and a half centuries, and continue to do so today. For all of human existence, a concentration of CO2 of something like 260 ppm or 270ppm was the norm.

You have to go back some 3 million years to find a time when we had this much CO2 in the atmosphere. In the past, when they didn’t have automobiles and coal stoves, CO2 would sometimes rise slowly over thousands of years because of volcanic activity. At 410 ppm of carbon dioxide, most surface ice will melt and most places on earth will become tropical over time. The deep oceans are very cold and circulate slowly, so it will take thousands of years for the full impact of our current heat-trapping gas concentrations in the atmosphere to be felt. Still seas will rise four to six feet in this century alone, and hurricanes and cyclones will cause coastal flooding and storm surges with increasing frequency and ferocity.

Another worrisome development is that global heating and the climate crisis are displacing millions of human beings and bush animals, often bringing them into closer contact, and allowing viruses to jump between species. The novel coronavirus is suspected to have developed in bats.