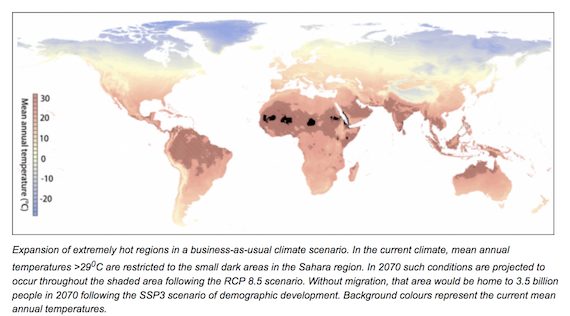 Ann Arbor (Informed Comment) – A new article in the Proceedings of the National Academy of Sciences presents findings that shocked the authors themselves.

If the world (by which I mean you and me, dear reader) does not swing into prompt action to deal with the climate emergency, some 3.5 billion people are going to end up living in places where it is unbearably hot by 2070. And likely a lot of them will have to leave for somewhere else.

By swing into action I mean ceasing to drive gasoline-powered cars and ceasing to use coal to generate electricity, and ceasing to farm in high-carbon ways (all things, by the way, that we know how to do, and relatively cheaply. If you own your home and plan to be in it at least 10 years, put solar panels on the roof and save yourself a lot of money. If you need a car to commute and are looking to buy, make your next one electric and get over your irrational range anxiety. The new ones go 200-250 miles on a charge and the average trip is 5 miles; and they are coming down in price, and you still get a $7500 Federal tax rebate plus whatever your state offers. Obviously some of my readers can’t do these things this year with the job losses and bad economies, but they can vote for politicians who will put in pro-green policies).

The year 2070 sounds like a long way away. It isn’t. For one thing, these changes are gradual and are taking effect now and will accelerate ten years and twenty years from now until they hit a crescendo in 50 years. For another, science fiction writers have long made the point that setting a story twenty years in the future, say 2040, makes it sound distant, but a point twenty years in the past is not considered nearly as far away (indeed, for older people it seems like yesterday). Fifty years ago was 1970: it was the first Earth Day, the Beatles released their last album, “Let it Be,” the al-Assads came to power in Syria, the US Environmental Protection Agency came into being, and PBS began broadcasting. Sure, for those not yet born it sounds like ancient history but it is recognizably our world, and so to will 2070 be.

For the past 10,000 years, during which human civilization developed, temperatures had been relatively stable and parts per million of carbon dioxide fluctuated in a narrow range, in the 200s. We have now hit 410 ppm of carbon dioxide, which is already dooming us to a much greater average temperature. But if we go on like this we will reach a point where the greenhouse gases are so concentrated that they make the whole world tropical, melt all land ice and cause sea level to rise so we will lose thirty percent of the earth’s land mass. The last time that happened, there were also mega-storms. Swedish archeologists found evidence, at a time of very high CO2 concentrations tens of millions of years ago, of a hurricane over that land that was relatively stationary and lasted 10,000 years. In other words, we are capable of producing conditions under which human civilization as we know it would be extremely difficult to maintain.

These outcomes would take thousands of years to come to pass. What will happen in only 5 decades, though, if we don’t stop putting out carbon dioxide tout de suite, is that some 20% of the earth will be to hot to live on.

Right now, the band of unbearably hot regions is very narrow and this scalding temperatures only affect 0.8 percent the world’s land surface, as with Saudi Arabia’s vast “Empty Quarter” desert. But in 50 years, when today’s twenty-year-olds are 70, the percentage of the earth affected will be about one fifth. And three and a half billion people live in that band.

The way I read this map, the northern parts of South America and then Central America and Mexico will be hard hit, along with the Sahel in Africa, and then you have India and Pakistan, some of Southeast Asia, and Australia. If we figure people will likely vote with their feet and go north, and thinking about North America, I’d start studying Spanish, Mayan, Quechua and Portuguese if I were you.

So here is the irony. Donald J. Trump is the most anti-immigrant president we’ve had since the 1910s and 1920s. He talks dirty about immigrants (many of whom are the essential service workers during the coronavirus pandemic that we keep lauding as heroes). He is trying to stop legal immigration. He doesn’t want those people here.

But Trump is also the most pro-carbon president we’ve ever had. He actually wants to revive the failing coal industry! Coal is the most dangerous and most CO2-intensive fossil fuel. Just stopping the burning of coal in and of itself, throughout the world, would affect emissions dramatically. Trump wants to increase it. He also tried to remove mileage requirements from automobiles, encourage 12 miles a gallon gas guzzlers. Trump is doing everything he can to sabotage the earth.

So here’s the thing. You can’t have it both ways. Either you can mount a Manhattan project to stop global heating, or you can stop migration. You can’t pursue both pro-carbon and anti-immigration policies successfully at the same time. Visions of fortress America have their limits–the US and Canada have enormous coast lines and desperate people will find a way– ask Europe.

I personally think our current immigration rate is fine, and helps the country avoid the crisis of greying that Japan and Italy are facing (who is going to pay for social security for the next generation?) But even I wonder what would happen to the social fabric if the PNAS scenario eventuates and you had potentially hundreds of millions of people on the move.

The solution is simple. Put in a lot of industrial-grade wind and solar, go to electric vehicles, farm more sustainably, find replacements for cement, etc. We know what needs to be done, we have the technology to do it, and we would actually save money by doing it. What we lack is the sense of urgency and the political will. That too is in our own hands.

How Climate Changes Drives Migration To The U.S. | NBC News