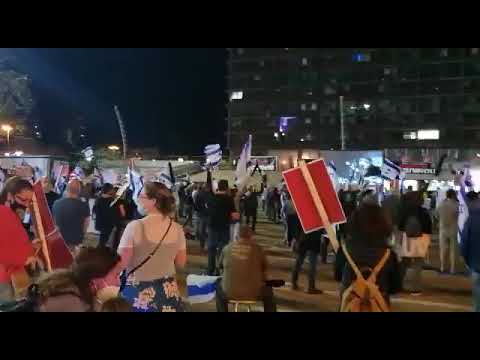 Ann Arbor (Informed Comment) – Thousands of Israelis gathered again at Rabin Square in Tel Aviv to protest the formation of a new national unity government by indicted prime minister Binyamin Netanyahu and his rival, Benny Gantz. The disciplined protesters maintained social distance from one another to prevent the spread of the novel coronavirus. Smaller rallies were held around the country in other cities, as well.

The government plan is for Netanyahu to serve as PM for 18 months and then for Gantz to rotate in. As part of the deal, the Israeli government will annex vast amounts of Palestinian territory in the Israeli-Occupied West Bank.

Netanyahu is under indictment for corruption, with the trial scheduled to begin May 24 after being delayed owing to the coronavirus quarantine. Eight separate complaints have been filed with the courts against the deal, one arguing that a politician under indictment should not be allowed to serve as prime minister. The Israeli supreme court will rule on this issue on Tuesday.

AP says, that the protesters chanted, “Shame! Shame!” and one carried a placard saying, “We Say No to a Corruption Government.” AFP says that another placard said, “36 cabinet ministers. Shame on you.”

If the Supreme Court strikes down the deal, it would throw Israeli politics into turmoil and probably send Israelis to the polls for a fourth time in 18 months. Three elections all produced hung parliaments. Netanyahu’s Likud Party, which has fascist tendencies, refused to make him step down as leader after the indictment, which has caused all the turmoil. Many Israeli parties would go into coalition with the Likud, but several refuse to sit in government with Netanyahu, who has ruled for 14 years.

A government could have been formed without Netanyahu by Gantz if his and other parties had been willing to accept the backing of the largely Palestinian-Israeli “Joint List.” Israeli racism, however, does not permit allowing the 20% of the population that is of Palestinian heritage any role in Israeli governance. The analogy is to white Alabama politicians in the Jim Crow era, who did not allow Black state legislators and state cabinet officers.

I wrote on this issue earlier that Netanyahu is involved in several illegal scandals:

“Case 1000 which involves allegations that the PM and his wife accepted illegal gifts from businessmen; Case 2000 which accuses Netanyahu of attempting to buy favourable newspaper coverage; Case 3000, also known as the “submarine scandal”; and Case 4000, in which a close associate of Netanyahu is suspected of providing confidential information to Israel’s largest telecoms company.”

Case 1000 is the one in which Netanyahu allegedly accepted a couple hundred thousand dollars in bribes from an Australian businessmen in return for favorable treatment of his business and attempting to get him a US visa. (Whether Netanyahu regularly got people visas should be looked into as a form of corruption on the US side).

In case 2000, Netanyahu is alleged to have offered a deal to Arnon Mozes, the publisher of Israel’s biggest-circulation newspaper, Yedioth Ahronoth. Netanyahu supporter and shady casino billionaire Sheldon Adelson had begun a free pro-Netanyahu newspaper, Yisrael Ha-Yom, and it obviously was eating into the profits of the other newspapers in the country. (How this is not illegal as “dumping” baffles me.) Netanyahu allegedly told Mozes that he could persuade Adelson to reduce the publication run of Yisrael Ha-Yom, which would help his bottom line. In return, Mozes should report more favorably on Netanyahu.

Adelson is also a Trump backer.

That wasn’t the only instance of interference in press freedom. In Case 4000, the third on which Netanyahu was indicted, according to BBC Monitoring, the police issued a statement saying,

In my view it is the interference with the press that is explosive. In the first one Netanyahu got champagne and cigars. But cases 2000 and 4000 show how far right wing nationalist politics is intertwined with shady businesses like casino-owning and their ability, having bilked millions of poor and working people out of their money, to turn around and buy influential press organs to convince the latter to vote for the people who screwed them over. (Although Netanyahu is notorious in the West for having reneged on the Oslo Accords and having denied Palestinians their rights, within Israel he has also led an assault on the old socialist welfare state, throwing workers under the bus and diverting money to the billionaire class.) It is a perfect vicious circle.

In another development, Israel will allow a limited opening of schools on Sunday, but the Palestinian-Israeli community leaders won’t follow suit in their schools in the Galilee and Haifa. The coronavirus outbreak is still going strong in their areas, and has affected them more than Jewish Israelis because of their greater poverty and their filling of essential service jobs, including as nurses, medics and physicians at Israeli hospitals.
—-