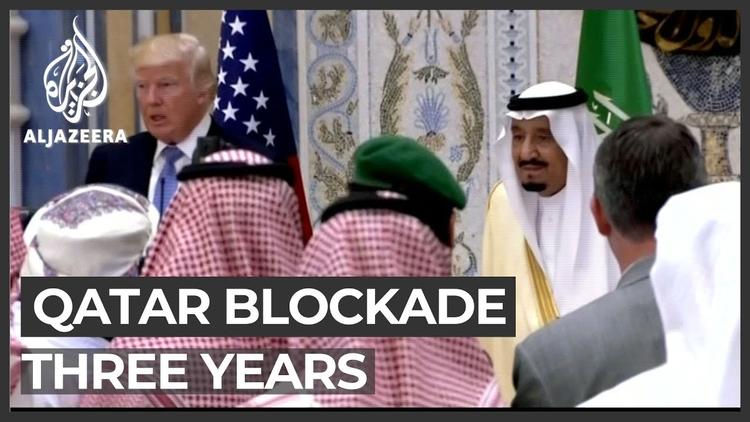 Ann Arbor (Informed Comment) – Trump produced widespread disgust on Tuesday by accusing a 75-year-old peace activist in Buffalo New York who was put in the emergency room by police of being an Antifa plant. It is a lie. The man is part of the pacifist Catholic Worker movement, there is no Antifa (anti-Fascist) organization in the US as opposed to a handful of isolated young anarchists; and the FBI finds no Antifa involvement in the occasional violence that broke out when the protests against police brutality first began. Trump’s line about a dangerous, violent, far left fifth column is extremely dangerous, since it aims at branding legitimate dissent as a form of terrorism. Making the urban middle class afraid of a far left takeover was one of the ways Hitler came to power in Germany.

Three years ago, the big news in the Middle East was an attempt by Saudi Arabia, the United Arab Emirates, Egypt and Bahrain to wipe out the small Gulf country of Qatar. It was a naked power grab, and perhaps a play for Qatari natural gas wealth. Not since Iraq’s Saddam Hussein had attempted to wipe out Kuwait in 1990 had the Middle East seen such an ambitious act of aggression.

Qatar hosts the US al-Udeid Air Force Base, with some 10,000 military personnel as a favor to Washington. Many of the sorties flown in the US military struggle against ISIL, al-Qaeda and the Taliban in the Middle East took off from al-Udeid.

The United Arab Emirates set off the struggle by hacking Qatari news feeds and putting up deep fakes of Qatari Emir Tamim Al Thani, intended to smear him as an anti-American supporter of extremism. Sheikh Tamim is well-spoken in English and is extremely pro-American.

It even seemed to work for a brief moment, when Trump, always a sucker for phony conspiracy theories, tweeted out his support for the Saudi-UAE aggression.

The blockade did long-term and severe damage to US interests in the Gulf. The Gulf Cooperation Council (Kuwait, Bahrain, Oman, Qatar, Saudi Arabia and the Emirates) was destroyed as a security pact. After a bruited invasion of Qatar by two GCC “partners,” how could Qatar ever again trust Saudi Arabia and the UAE and integrate its armed forces and intelligence with them. I think the GCC is over with. It might have an afterlife in the economic realm. But not security.

Saudi Arabia may also have been emboldened by unstinting Trump support to murder Washington Post journalist Jamal Khashoggi in 2018, and to continue its ruinous war on Yemen.

Ironically it had been founded in 1982 because the small Arab Gulf oil monarchies felt threatened by Iran during the Iran-Iraq War (1980-1988).

But Qatar had no choice but to accept Iranian support during the blockade. Qatar Airlines initially could only fly with the help of Iranian air control, since Bahrain cut Doha off. Iran sent food after Saudi Arabia closed its land border with Qatar, and stopped Jordanian vegetable and fruit from being trucked in.

The Trump administration (or at least its few sane members) had hoped to use the GCC to pressure Iran, but now the GCC was broken and Qatar needed Iran. Oman also was never on board with hostility to Iran. The whole Iran policy in the Gulf fell apart, and Qatar was pushed into a position more like Iraq’s than like Saudi Arabia’s.

Among the charges leveled against Doha (Qatar’s capital) was that it hosted a free press in the form of Al Jazeera, which carried reports sometimes unflattering to the Quartet. Al Jazeera had played an out-sized role in the Arab Spring youth revolts of 2011-2013, which Saudi Arabia and the UAE used their oil wealth to try to crush (succeeding everywhere but Tunisia). Qatar, in supporting multi-party democracy that made a place for the Religious Right like the Muslim Brotherhood, was seen by Riyadh and Abu Dhabi as a dire threat to their vision of the Middle East as a set of right wing military dictatorships and absolute monarchies.

Qatar is a small peninsula sticking up from Arabia into the Gulf. It supplies natural gas to US allies (1/3 of Britain’s natural gas comes from there). In fact, Qatari Liquified Natural Gas (LNG, which can be transported by container ships rather than needing pipelines) is a key part of US energy strategy, and Washington has been pressuring European countries to put in LNG receiving facilities at its ports so that it can become less dependent on the Russian Federation.

Then US Secretary of State Rex Tillerson, as the former CEO of Exxon-Mobil, knew how important Qatar is to the United States. So too did then US Secretary of Defense Jim Mattis, whose military was still fighting ISIL in Iraq and flying missions from al-Udeid. They are alleged to have spent the summer of 2017 working behind the scenes to undo the damage Trump did, and to stop the Saudi-UAE attempt to overthrow the Qatari government.

In the tense days, exactly three years ago, when it seemed that the Saudis and Emiratis might actually militarily invade Qatar and depose Sheikh Tamim, it appears to have been Turkey that intervened most effectively. The Turkish parliament authorized the stationing of some two hundred Turkish troops in Qatar, and their presence served as an effective warning to Saudi Arabia not to try anything. Turkey is a NATO country with a big well-trained army and excellent air force with the latest US weapons, and while Saudi Arabia has bought a lot of fancy equipment, its military’s poor showing in Yemen since 2015 does not inspire confidence that they know how to use it or that their army has much esprit de corps. Turkey would wipe the mat with them.

By the fall of 2017, Trump had somehow been convinced to stop backing the blockade against Qatar, and relations between Doha and Washington improved. Some of this change was accomplished by Tillerson and Mattis. Some of it was effective Qatari lobbying (though Saudi Arabia and the UAE are bigger players in the inside-the-beltway lobbying scene).

Qatar had been punching above its weight in the region beginning in 2011, strongly supporting the Egyptian Revolution, rebels in Syria, rebels in Libya, and the Nahda or Renaissance Party in Tunisia. Its citizen population is only 300,000 or so, about the size of Pittsburgh or Cincinnati. Egypt’s population is about 100 million. Some of the rebel groups Qatar favored were Muslim fundamentalist, such as the Muslim Brotherhood (though the MB in this period had committed itself to parliamentary democracy). But Qatar’s politics can’t be reduced to the Muslim Brotherhood, which is not important in Doha. Qatar has supported a free press and democratic elections whatever the outcome. It has given billions to multi-cultural Lebanon, and also welcomed strongly secular figures such as former Palestinian-Israeli lawmaker Azmi Bishara to Doha, giving them positions of importance. (The Saudis demanded that Qatar close down Al Jazeera and expel Bishara).

Since the blockade began, Qatar has retrenched in its foreign policy, leaving geopolitics largely to other players. Turkey has taken up some of the slack here as a champion of democratic pluralism that makes a place for the Religious Right, though its own democracy has been injured by the policies of President Tayyip Erdogan.

When Napoleon was accused of having a prominent enemy assassinated, a French politician observed that the act was worse than a crime, it was a mistake. That observation should be the epitaph for the Trump administration. It is certainly a true assessment of his initial support for the blockade of Qatar. That was a mistake that continues to harm US interests in the Gulf region. Is there no conspiracy theory Trump won’t fall for, however damaging to US interests?