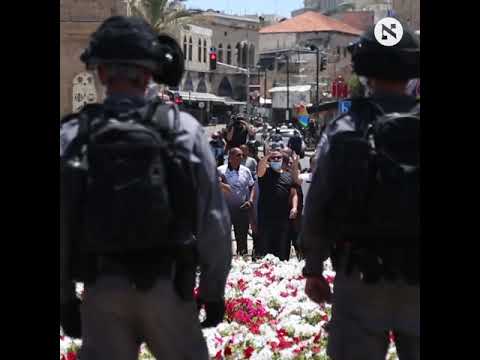 Ann Arbor (Informed Comment) – As the US and even Israel have seen Black Lives Matter protests, Yair Netanyahu, 28, the son of Israeli Prime Minister Binyamin Netanyahu– who lives in the prime minister’s residence– called on Sunday for Israelis of Palestinian descent to be expelled from Tel Aviv.

The Tel Aviv municipality’s plans to pave over a historic 200-year-old Muslim cemetery in Jaffa have provoked demonstrations in that town (now a suburb of Tel Aviv) by Israelis of Palestinian descent. It was those demonstrations that provoked Netanyahu’s outburst. There are nearly 2 million Palestinian-Israelis (as I call them on the pattern of Italian-Americans), a bit over 20 percent of the Israeli population.

The Israeli government also bulldozed the Muslim cemetery of Mamilla in Jerusalem, atop which it is now building what it calls a museum for tolerance.

Although it is typically considered out of line to accuse Israelis — many of them descendants of Holocaust survivors — of talking or behaving like Nazis, it has to be said that insisting on the “purity” of the dominant ethnicity and removing polluting minorities was also a pretty big talking point in the Germany of the 1930s.

Yair Netanyahu has also said that Barack Obama was born in Kenya, and called for the reconstitution of a “free, democratic and Christian” Europe, implying the expulsion of the 5,760,000 French Muslims (8.8% of the population) and the 4.7 million Muslims in Germany, and, well, if we are talking a Christian Europe, I presume this would mean expulsion of 450,000 French Jews. He was temporarily banned from Facebook last year for hate speech.

While it is true that politicians often have kooky relatives who say weird things, there is not any evidence in this case that Benyamin Netanyahu disagrees with his son. Both belong to the far right Likud Party that was born in Central Europe in the age of mass politics and carries with it emphases on virulent ethnic nationalism and intolerance of the Other. The senior Netanyahu has dismissed Israelis of Palestinian descent serving in the Parliament (Knesset) as “terrorists” and often has used racist language.

Netanyahu’s remarks about expelling Palestinian-Israelis from Tel Aviv recall the trauma of the Nakba or Catastrophe. During the 1947-48 war, some 750,000 Palestinians were expelled from their homes in what is now Israel by Zionist militias intent on carving out a new country in what had been the British Mandate of Palestine. A contemporary document from the Hagana estimated that 75% of Palestinian flight was the result of Zionist militia activity. These families are still refugees in Gaza, the West Bank, Jordan, and Lebanon. There are some 12 million Palestinians. Five million of them live under Israeli military occupation in Gaza and the Palestinian West Bank, and, as noted, nearly 2 million have Israeli citizenship. The rest form a largely impoverished diaspora and most are stateless except for those in Jordan, where they often face discrimination.

Even Israelis of Palestinian descent with Israeli citizenship often live in unrecognized villages where they find it difficult to get building and repair permits from the Israeli government, what with not being recognized and all.

Suhail Kiwan at al-Quds noted that these events come at a time when the US itself is preoccupied with issues of racial injustice. He argued in the light of the younger Netanyahu’s remarks that Palestinians have it worse than African-Americans. He argued that no prominent American figures are calling for Blacks to be ethnically cleansed. Kiwan does not know about the white supremacists or de facto regimes of residential segregation. But he does have a point. This would be like Don Trump Jr. calling for African-Americans to be expelled from Washington, D. C. On the other hand, there really isn’t any point in contrasting the two situations. Injustice on racial grounds cries out for redress and for the achievement of equality of opportunity wherever it is found. It isn’t something that is on a sliding scale, any more than evil itself is.