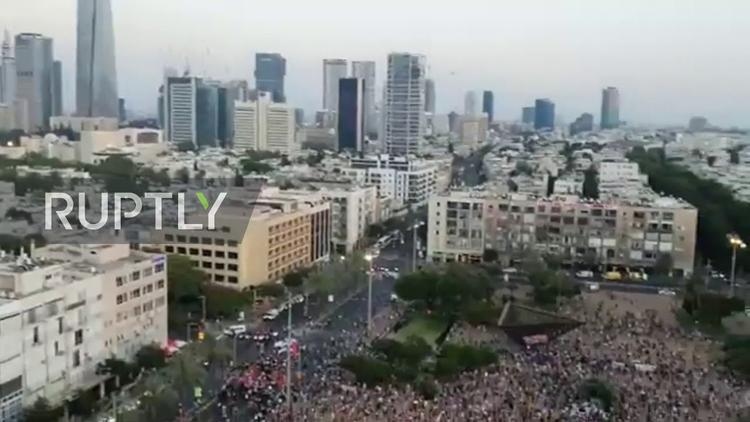 Ann Arbor (Informed Comment) – Arab48 reports that some 6,000 Israelis gathered in Rabin Square in Tel Aviv on Saturday to protest the Netanyahu government’s plan to annex one third of the Palestinian West Bank.

The gathering was addressed via video by US Senator Bernie Sanders, who said,

“It has never been more important to stand up for justice and to fight for the future we all deserve. I am extremely heartened to see that so many of you, Arabs and Jews alike, are standing together tonight for peace, justice and democracy.” “It is up to all of us to stand up to authoritarian leaders and work together to build a peaceful future for every Palestinian and every Israeli. Like you, I believe that the futures of the Israeli and Palestinian people are entwined and that all of your children deserve to live in safety, freedom and equality. For that to be possible, the plan to illegally annex any part of the West Bank must be stopped; the Occupation must be ended, and we must work together toward a future or equality and dignity for all people in Israel and Palestine. I know that on the day when we finally celebrate the establishment of an independent Palestinian state alongside Israel it will be because people like you stood up for justice, stood up for democracy, and stood up for human rights. In the words of my friend Ayman Odeh, “The only future is a shared future. We will build it together.”

Ayman Odeh: A Word from Bernie Sanders to the Demonstration in Tel Aviv

Odeh himself, the leader of the largely Palestinian-Israeli Joint List Coalition, also spoke on video because he is self-quarantining because of the novel coronavirus.

He said, “We are at a crossroads. One of the roads leads to a joint society with true democracy and civil and national equality for Arab citizens. The second road will lead us to hatred and violence and annexation and racist segregation. We can stop annexation, but it requires that we all fight it together. There will never be social justice if we do not end the Occupation, for democracy is not solely for Jews.”

What I call Palestinian-Israelis constitute over 20 percent of the Israeli population, but are second-class citizens. The Joint List won 15 seats in the 120-member parliament or Knesset in the recent elections, but has been excluded entirely from any say in national politics.

The head of the center-left Meretz Party, Nitzan Horowitz, addressed the huge rally, saying, “Annexation is a war crime, a crime against humanity and against peace, a crime against democracy, a crime that will cost us blood.” He added, “The persons who would have been expected to constitute an alternative–the persons who won our votes– gave up and joined the other side.” He was ripping Benny Gantz and the Blue and White Coalition, as well as the Labor Party, which gained cabinet seats by joining with Likud’s Binyamin Netanyahu in a national unity government.

The crowds shouted slogans against the annexation plan, against the continuing Occupation and depriving Palestinians of basic rights, and against last week’s killing of an autistic Palestinian man by Israeli border guards in East Jerusalem. Many in the crowd also accused Netanyahu of destroying Israeli democracy.

The police killing in the US of George Floyd was also denounced at the rally.

It was the biggest demonstration by the Israeli left wing in many years, and was remarkable for its mixed character, with both Jewish and Palestinian Israelis coming out.

If the goal of the event was to forestall annexation, however, it is doomed to fail, since Netanyahu has the votes in parliament to go forward, and the Trump administration is a cheer leading section for the far right wing Likud-led government. The annexation will completely end any prospect of anything resembling an actual Palestinian state and will formalize for decades to come Israeli Apartheid on the Palestinian West Bank, which is under Israeli military occupation.

Under the terms of the Kushner Plan, Netanyahu appears willing to declare some sort of feeble Palestinian administrative authority, which lacks any of the prerogatives of a real state, a “Palestinian state,” which has angered the many Israelis to his Right.

Palestinians are actually stateless and lack control over their air, water and territory, and lack basic human rights.

Some forms of Apartheid lasted in South Africa from 1910 until 1991, and from the vantage point of 2020, it seems likely that Israeli Apartheid will beat that record, lasting substantially more than 80 years.