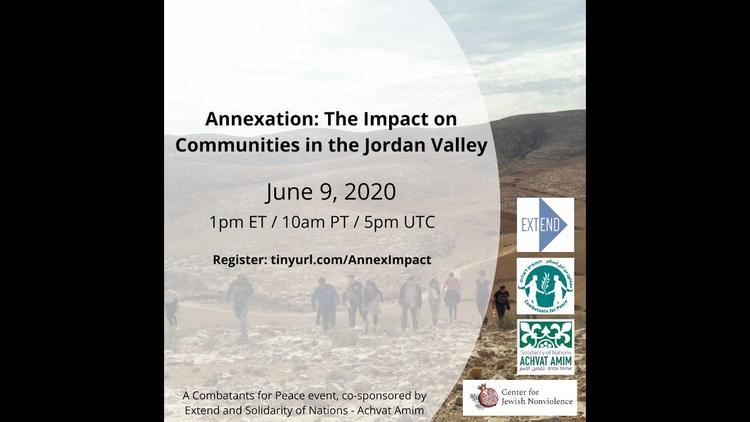 The violent Israeli encroachment and annexation of Palestinian land is putting the future of the West Bank and its residents in an extremely vulnerable position.

( Opendemocracy.net ) – It has not been an easy year for Palestinians, if there ever was such a thing. With the turn of a new decade in January, the U.S. administration unveiled the paradoxically branded “deal of the century” plan—calling for Israel to unilaterally annex about a third of the West Bank. Then the coronavirus slipped through the checkpoints into Bethlehem in March, sending millions of Palestinians into lockdown. And in April, Israel formed a unity government with an eye on the immediate annexation of the Jordan Valley in direct violation of international law.

Today, just weeks before that land grab is set to be pushed through in July, many Palestinians worry that it could go largely unnoticed with the world’s attention focused squarely on defeating the virus and curbing its economic fallout.
Join the COVID-19 DemocracyWatch email list

Palestine is often presented as an anomaly in global politics. Apologists of the Israeli occupation of the Palestinian territories have been able to effectively present a narrative of exceptionalism by emphasising the relatively small size of this hotly contested corner of the Mediterranean, and insisting that there are irreconcilable religious divisions. The fight against COVID-19 has demonstrated similar dynamics, as the Israeli government has received lavish praise for its response to the pandemic within its own borders, while letting it spill over into the occupied territories essentially unchecked.

In the context of crisis that has recently been compounded by the looming annexation plan and the health threats presented by the pandemic, social justice movements in the agricultural sector have elevated their struggles to new levels. Key among these endeavours are the protection of natural resources such as land, water, and seeds, and the recognition of multiple forms of Palestinian sovereignty.

“Our response to the coronavirus pandemic has been to urge our people to go back to their lands and cultivate,” said Amal Abbas* of the Union of Agricultural Works Committees (UAWC), a small-scale food producers’ movement representing some 20,000 peasant farmers and fishers in the West Bank and Gaza. This Palestinian version of sheltering in place mirrors UAWC’s broader strategy of resisting occupation and annexation, work that it has been doing since 1986.

Settler colonialism, the invasive process that seeks to replace an indigenous population with an external one, has its own Kafkaesque set of rules upholding it in the Israeli legal system. An important example of this is a law that stipulates that if land is not worked for three years, it automatically becomes [Israeli] state land. The Israeli military has gone to great lengths to fold as much “idle” Palestinian land as possible into the architecture of the state. This law is used in part to justify the establishment and expansion of illegal Israeli settlements by the means of violent evictions, home demolitions, the confiscation of cultivated agricultural land, and the separation wall.

Palestinian human rights defenders are working to flip this narrative and the overarching political project it sustains on its head. Farmers and rural workers in the West Bank and in the Gaza Strip—just like anywhere else—have been longstanding agents of social change, and for this reason are among the most targeted sectors of Palestinian society.

This slow form of violent encroachment, together with the fast-tracked one of annexation that is on the Israeli parliamentary table with strong U.S. support, puts the future of the West Bank and its residents in an extremely vulnerable position. “The Israeli military has been taking advantage of our current emergency situation and accelerating their actions,” offered Amal.

Some of the most egregious actions taken by Israeli authorities in the current context of pandemic have occurred in the Jordan Valley, which is precisely the area they seek to annex. This area already falls under the classification of Area C, meaning that it is part of the more than 60% of the West Bank that is under full Israeli civilian and military control. Perhaps unsurprisingly, Area C is rich in natural resources such as underground water and fertile growing land. Not only is the Jordan Valley the unequivocal agricultural jewel of Area C, but it is also a strategic border with Jordan and a gateway to the Arab countries of the greater Levant.

Public services are in short supply for the Jordan Valley’s majority Bedouin population. That is why movements of farmers and workers like UAWC are filling that gap, providing basic services like water, sanitation, education, seeds, food, and nutrition. Even these services face relentless and aggressive opposition. For instance in late March, the Israeli military destroyed an emergency coronavirus field clinic that Palestinians were in the process of erecting in the northern Jordan Valley.

Despite these threats, UAWC and other Palestinian grassroots organisations visit elderly people and pregnant women in mobile clinics, distribute educational and protective supplies, and construct rooftop and urban gardens across diverse communities. This coronavirus crisis response work has largely been successful because it is a reflection of the kind of work Palestinian social movements continually engage in throughout the ongoing crises that occur under military occupation.

“Some of the best work that we are doing to fight off the virus and resist the annexation is through our seed bank,” said Amal. UAWC has maintained a seed bank since 2003; in it they safeguard rare heirloom Palestinian seeds that have been carefully passed down from one generation to the next. These seeds and the food sources they produce have a multiplicity of purposes. “Not only do our indigenous seeds make it easier to return to our land and protect it through cultivation,” Amal explained, “they hardly use any water and shield us from climate change.” She added: “And with so many still locked down because of COVID-19, continuous access to seeds allows people to feed their families and neighbours when it is unsafe to access food via the marketplace.”

In late March, the Israeli military destroyed an emergency coronavirus field clinic that Palestinians were in the process of erecting in the northern Jordan Valley

UAWC insists on the importance of internationalism and solidarity in normalising the plight of the Palestinian small-scale food producers it represents. It is a member of the international peasant movement La Vía Campesina, which has taken a strong stand against colonialism and corporate control of agriculture and is active in 81 countries. Maintaining that important political relationship has allowed Palestinian activists the opportunity to host learning exchanges in their territories and also participate in those that take place abroad.

“Together with La Vía Campesina, we are using this opportunity to prove to the whole world that the global health care and food systems are not working and put forth our solution of agroecology as an alternative to the neoliberal model,” Amal explained. “Our contributions to the food sovereignty movement as Palestinians can help people understand that the occupation is about control over natural resources just like most other land grabs,” she summarised.

Certainly, the militarised Israeli conquest of Palestinian territory has its own history, but it is also indicative of settler colonial processes that have taken place elsewhere, such as in the Americas, Australia, and South Africa. As this next phase of annexation plays out in the West Bank, against the distracting backdrop of the pandemic, these connections are critical. Far from an anomaly of the global politics of natural resources, Palestine has encapsulated them in a microcosm.

* Name has been changed to maintain confidentiality

Salena Fay Tramel is the Interim Solidarity Program Officer for Honduras and Puerto Rico at Grassroots International, where she previously served as the Program Coordinator for the Middle East and Haiti. Salena has accompanied transnational food sovereignty and climate justice movements in a variety of roles. Most recently, she led a research process for the feminist consortium Count Me In that tracked the role of investors behind the scenes of extractive industry in Indonesia, Zimbabwe, and Honduras. Salena is a PhD candidate in the Political Ecology research group of the International Institute of Social Studies in The Hague.

Combatants for Peace: “Annexation: the impact on communities in the Jordan Valley”