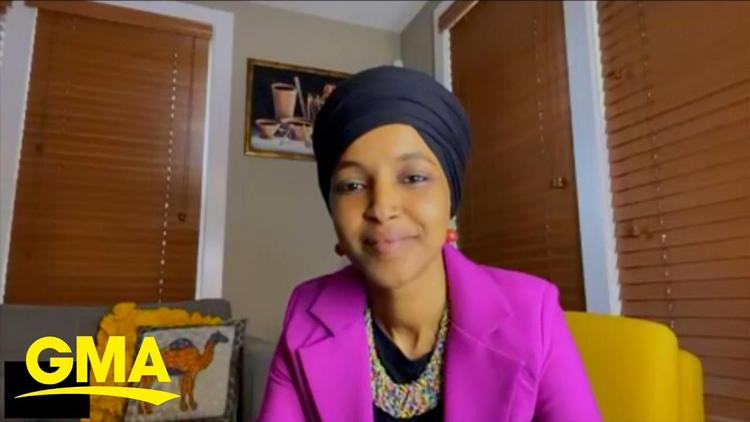 Ann Arbor (Informed Comment) – In his typically unhinged rant to a nearly empty stadium in Tulsa, OK, Trump attempted to use Minnesota Congresswoman Ilhan Omar to denigrate his Democratic rival Joe Biden. He said, according to the WaPo,

She would like to make the government of our country just like the country from where she came – Somalia. No government, no safety, no police, no nothing, just anarchy. And now, she’s telling us how to run our country. No, thank you.”

Trump attempted to other Ilhan Omar and thereby to other Joe Biden, tagging both with African-ness, which as he notoriously made clear, Trump associates with “shithole countries.” He implies that the post-1965 wave of immigrants from Africa want to turn the US into such a country.

His attack on her came the weekend of Father’s Day, just after her father had died, which is low even for Trump.

Here are the reasons Trump is wrong:

2. Among the bills supported by Ilhan Omar, according to Ballotpedia are:

Paycheck Recovery Act of 2020: This bill directs the Department of the Treasury to establish a paycheck recovery program to provide grants for certain small businesses and employers that have lost revenue because of COVID-19.
5/19/2020: Referred to the Committee on Financial Services

Saving Our Streets Act: This bill establishes and provides funding for the Microbusiness Assistance Fund through which the Department of the Treasury must provide grants to specified small entities.
5/19/2020: Referred to the Committee on Small Business,

Child Care Is Essential Act This bill establishes and provides $50 billion in appropriations for the Child Care Stabilization Fund to award grants to child care providers during and after the COVID-19 (i.e., coronavirus disease
5/27/2020: Referred to the Committee on Appropriations

To amend the Insurrection Act to curtail violations against the civil liberties of the people of the United States, and for other purposes.
6/8/2020: Referred to the Committee on Armed Services

I see support for businesses and families and civil liberties here. In contrast, Trump appears to have given most of the $500 bn Congress passed for Covid relief to big corporations and Friends of Donald, and threatened to send the US Army in against Black Lives Matter protesters over the objection of state governors.

3. Trump’s description of Rep. Omar’s goals as “no government” is much more appropriate to his own policies. Trump has systematically sidelined the key functions of government. He has more or less abolished the Environmental Protection Agency, instructing it to engage in virtually no regulatory activity and leaving us all at the mercy of corporate polluters. He has fired several Inspectors General who were trying to root out corruption in the Executive. He has crippled the Centers for Disease Control response to the Coronavirus, and his Tulsa rally where he discouraged mask-wearing and social distancing is emblematic of his defiance of CDC government guidelines. We have much less effective government under Trump.

5. As for Trump’s dog whistle implication that an African Muslim immigrant is somehow less than American, actually African Muslims have been essential to the history of the United States.

“African Muslims also fought alongside colonists during the Revolutionary War (1775-1783). Multiple men with Muslim names appear on the military muster rolls, including Bampett Muhamed, Yusuf ben Ali (also known as Joseph Benhaley), and Joseph Saba. Other men listed on muster rolls have names that are likely connected to Islamic practice, such as Salem Poor and Peter Salem, whose names may reflect a form of the Arabic salaam, meaning peace. These men often distinguished themselves on the battlefield.”

Skip Gates writes that 388,000 African slaves were shipped directly to the United States. Likely 15 percent to 30 percent of them, 58,000 to 116,000, were Muslims. By 1863 the African slaves had grown by natural increase to 4 million slaves. Although many African Muslims proved unable to pass their religion on to their children in conditions where families were broken off and children and spouses sold off to other owners, there are accounts of slaves praying five times a day toward the east. The plantation owners in the South did not bother themselves about the religion of their slaves for the most part, and Protestant missionaries working among them complained that some were Catholic (from the kingdom of Angola) and some were “heathen,” which would have included both animists and Muslims. Slave labor produced plantation wealth and built infrastructure.

Even the White House in which Trump sits was built with the labor of slaves, and very likely with some Muslim slave labor.

African Muslims have been central to American history and American success. Ilhan Omar has been an American citizen longer than Melania Trump, and stands in a tradition of contributing to this country.