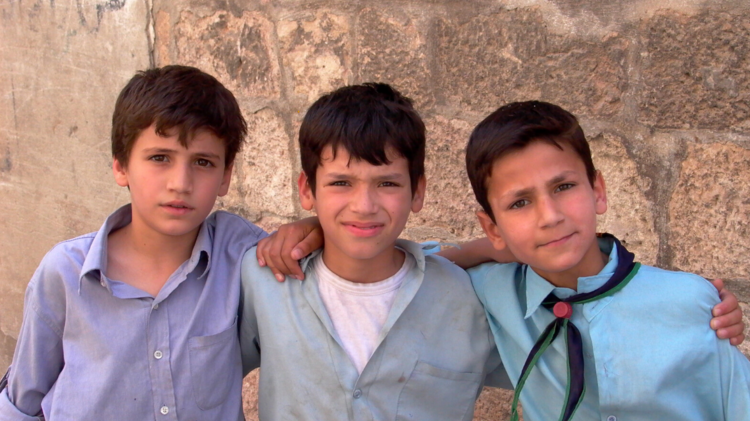 From Eden to Ruin

( Christian Courier) – While living in Jordan, my wife Sally and I fell in love with Syria and its people through many visits stretched over four decades. Our last adventure in 2006 was to Aleppo, when we stayed in a converted khan in the middle of its souq (market), which sold traditional hand-crafted goods, inlaid wood, beaten copper, loom-woven silks and braided gold. We saw Syria through the eyes of besotted tourists and barely noticed the unrest roiling under the surface.

We can’t help but wonder: “Where are they now?” Bert met these three boys in Aleppo in 2006. Photo credit: Bert de Vries.

Today that Aleppo souq and entire cities are reduced to rubble, barrel-bombed by Bashar al-Assad’s air force targeting rebel troops entrenched in residential neighborhoods. Half of Syria’s population of 23 million has fled from home, eight million inside Syria and four million into surrounding countries. Since 2011, over 400,000 people have died, many after torture in government prisons. When we ask our refugee neighbors in Jordan why they are not returning, they tell us that life back home is more miserable than stateless life as a refugee. 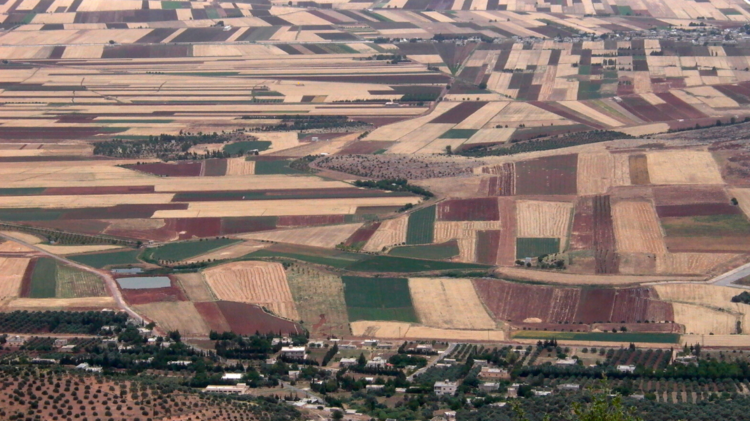 A birds-eye-view of Syria’s Orontes Valley agriculture, west of Hama. This photo was taken pre-civil-war in 2006, just before the drought of 2007-2011. Photo credit: Bert de Vries.

The end of religious pluralism
On the eve of the civil war in 2011, Syria was a multi-religious state, with a Sunni Islamic majority (74 percent), Shi’ite splinter groups (13 percent), Eastern Christians (10 percent) and Druze (three percent). During Ottoman Turkish rule, tolerant co-existence was formalized by making the religious leaders the legal representatives of their communities. The result was peaceful co-existence, especially in traditional cities like Aleppo, where citizens of various religious affiliations worked elbow-to-elbow in its market economy. However, when post-World-War-I French colonial rule installed Western democracy, the minority rights were suddenly subject to majority fiat. By 2011, after decades of independence, Syria had not solved the problem of inequality resulting from political modernization.

Baath socialism and Assad autocracy
An alternative to religious pluralism was pan-Arab nationalism, which underlay the secular Baath socialist party formed in the 1940s. Membership gave the religious minorities a new platform for protection from the Sunni majority. By 1970 the Baath used its parliamentary majority to abolish all other parties, and Syria became a one-party totalitarian state in which citizens’ votes are meaningless. The demonstrations of 2011 included pleas to restore popular democracy.

Hafez al-Assad, who used cronyism and force to claw his way to the top, ruled Syria as its Baathist dictator from 1970 until his death in 2000 using universal surveillance, jail, torture, targeted killing and mass murder. Fearful submission infused the population like an incurable viral infection. Ironically, through Baath membership and despot cronyism, the Alawite minority, in consort with Christian and some Sunni colleagues, now ruled over the Sunni majority.

After Hafez’s death in June 2000, the Minister of Defense gathered the top military advisors to propose the extra-constitutional succession of Bashar, his son. Sam Dagher reports that the Minister had soldiers stationed outside the meeting room poised to kill any dissenters. No one left (Assad or We Burn the Country, 97). On the eve of that succession, Sally and I visited Damascus, which was plastered with Hafez and Bashar posters proclaiming “Father’s” ascent into heaven and the inception of “son’s” enlightened rule. Though Syrians hoped for relief from oppression, by 2006 all they got was crony-owned internet services and continued suppression, hidden behind a façade of progressive chic. The son’s rule proved to be a mere mutation of the father’s deadly virus.

The Arab Spring
By 2011 urban residents lived in mismanaged and overcrowded tenements, rural villages were devastated by a prolonged drought, and all lived in fear of Bashar’s spies, jailing and torture (Sabouni and Daoudy). The Arab Spring reached Syria, beginning with popular demonstrations in Dera’a. But the Assads met the cries for liberty with a cacophony of gunshots fired into unarmed crowds. In the ensuing civil war this murderous reassertion of despotism at all costs remained clear, while frenzied violence and factional fragmentation obscured the insurgents’ initial clarity of purpose. Syria’s Arab Spring is over, even as the civil war continues nine years later, in 2020.

A stage for global politics
As these internal forces worked their destruction, Syria also became a theater for longstanding foreign power rivalries: France, the U.S.A., Russia, Turkey, Saudi Arabia, Iran, Iraq (ISIS), Lebanon (Hezbollah), Jordan and Israel. All these entered the fray, in ways reflecting their earlier histories of intervention. Because space does not allow full enumeration, I mention here the interventions of the two superpowers.

Cowed by the still raw trauma of Libya, the Obama administration reneged on its threat of punitive action after Bashar Assad’s heinous 2013 poison-gas massacre of 1,400 Syrians (Coll and Power). America’s backing away opened the way for the Russian air force to swoop in and save the Syrian army from almost certain defeat. Instead, joint Syrian-Russian intense bombing burned Syria to give Assad the “victory” (Dagher), with the near annihilation of Idlib Province earlier this year barely noticed as COVID-19 loomed. Finally, President Trump’s impetuous order for American withdrawal from northern Syria in October 2019 was not only a shameful betrayal of its Kurdish partners in the defeat of ISIS, but also an abandonment of internal refugees now exposed to the vengeful wrath of Assad’s soldiers (Morgelson). After that, Trump blocked entry into the U.S. to all refugees from Syria under the pretext of COVID-19.

To be sure, surrounding countries, especially Jordan, have hosted hundreds of thousands of refugees, and western countries, especially Canada, Germany and Norway, have sheltered many generously. For more on Norway, see Naguib’s testimony to compassionate generosity (see sidebar). Nevertheless, the net effect of outside interventions has been the amplification of conflict: piling on of weapons, the total ruin of cities, vast increases in death and displacement, the blocking of non-violent resolution, the support of despotism over human rights, and agony without end for the people of Syria (Khalifa, Death is Hard Work.)

As Syria goes. . .
In July of 2018 the doors of our house in Umm al-Jimal, Jordan rattled constantly from the percussion of bombs falling on villages just across the border. On July 8, the black smoke from burning houses darkened our skies and produced a blood-red sunset. That sight has become my icon of the misery inflicted on the people of Syria. As refugees escaping carnage continue to crowd into open fields and mud-floored tents, now they are painfully exposed to a new invader: COVID-19. Syria is the only country not reporting virus statistics to the W.H.O. to cover up, as Jordanians tell me, that its spread is rampant.

Living among the refugees at Umm al-Jimal has familiarized us with Syria and Syrians in profound ways; our awareness has penetrated far below the touristic veneer of earlier trips into the country. It has taught us more intimately that Syrians are fellow humans with lovely families, struggling heroically to raise their children in a Mad-Max world, homes reduced to rubble, living in tents mired in mud, clutching famished newborns, freezing to death, hoping for a better future but stuck in the status of refugee in a COVID-riven world. Meanwhile, the Assads and their cronies worked investment scams to take possession of 70 percent of the country’s wealth and are now fighting over the spoils amongst themselves like dogs over roadkill (Dagher and al-Yafi).

The case of Syria presents a model for seeing where any of us anywhere could end up, especially as we see the infection of autocratic rule and sycophant opportunism spread across the globe and at our doorstep. We are not immune. Therefore, I entitled this essay “As Syria Goes . . . ”

In my teaching of Islamic civilization, the deep tradition of tolerant religious communal pluralism was always a high-water mark. There were breakdowns, but always followed by a restoration. I pray that this could also be the way back for the people of Syria. 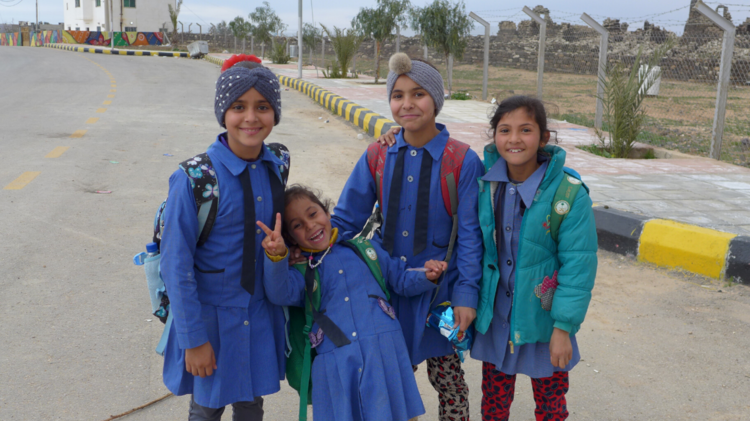 Reprinted from Christian Courier with the author’s permission.