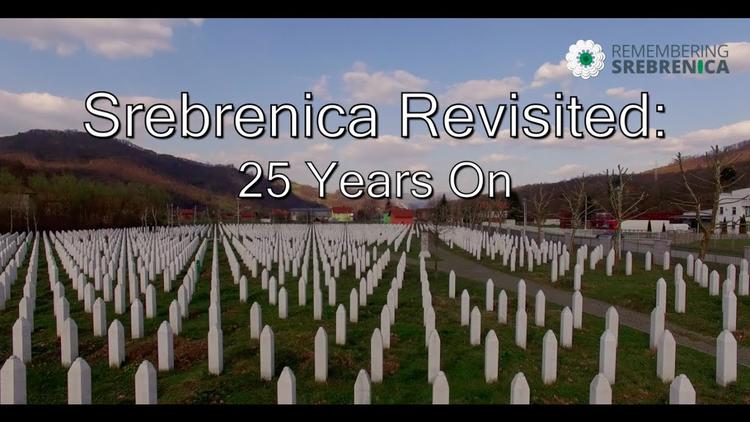 ( Middle East Monitor ) – This year marks the twenty-fifth anniversary of the Srebrenica genocide in which more than 8,000 Bosnian Muslim men and boys were brutally slaughtered by Bosnian Serb forces led by Ratko Mladic. The slaughter took place in a supposed UN Safe Area.

A quarter of a century later, reconciliation still seems to be a remote possibility. Nationalist Bosnian Serbs show no signs of reckoning with what happened and no commitment to a multi-ethnic country. They continue to deny the genocide, and threaten to break away and create their own independent state.

Such divisive rhetoric and actions both undermine the delicate balance of the post-war order, and constitute a gruesome recipe for a renewal of conflict.

It is impossible to dispute that genocide took place in Srebrenica; damning evidence was uncovered in the international investigations. Forty-seven people have been convicted in various domestic and international courts to a combined total of 704 years in prison, as well as four life sentences, including Radovan Karadzic, “the butcher of Bosnia”, for war crimes, genocide and crimes against humanity.

Nevertheless, a new report from the Srebrenica Memorial Centre says that, “Rather than abating with time, denial of genocide has only grown more insidious in recent years.”

The report confirms that the main strategies used by the genocide deniers are casting doubt on the international judicial proceedings by claiming the existence of a fictitious anti-Serb bias, and creating manipulative narratives to glorify war criminals and aggrandise Serbian nationalist ideology.

The speeches of Bosnian Serb President Milorad Dodik provide numerous examples. Not only has Dodik claimed that the Muslims who were murdered are “still alive” but he also argues that Srebrenica is an “arranged tragedy” conspired by some Western states to “put collective guilt on the Serbian people”. He dismisses the genocide by saying that it is “a fabricated myth”.

In a bid to support these false allegations, the government of Republika Srpska, one of the two entities which make up Bosnia Herzegovina, set up a commission in 2019 to probe war crimes committed in Srebrenica. However, far from being impartial and thus credible, it seems that the commission aims solely to whitewash the atrocities, exonerate Serbian criminals and manufacture a counter narrative to distort the truth.

Mother of a Srebrenica victim Fazila Efendic visits graves of her husband and son who lost their lives in the genocide, which started on July 11, 1995 when soldiers under the command of Serbian commander Ratko Mladic took over the city of Srebrenica, at Potocari Memorial Cemetery in Srebrenica, Bosnia and Herzegovina on February 15, 2020.
[Samır Jordamovıc – Anadolu Agency]

Unfortunately, the lack of recognition that what happened at Srebrenica was genocide is not limited to the domestic sphere. In line with Serbia’s state policy that has been in place for years, Prime Minister Ana Brnabic states that Srebrenica was “a terrible crime” but it does not constitute genocide. Nonetheless, in a combined effort to push their own narrative and to be perceived as a responsible party, Serbian statesmen continue to attend the annual commemoration events to pay their disingenuous tributes.

As if this persistent local and regional denial is not enough, last year Austrian author Peter Handke was awarded the prestigious Nobel Prize in literature, despite his open rejection of the Srebrenica genocide and his support for Serbian leader Slobodan Milosevic who was put on trial for war crimes and genocide before he died in 2006 in The Hague. This shameful decision by the Swedish Academy neglected Handke’s political stance and sparked outrage in the Balkans and beyond.

How can the survivors and relatives of the victims come to terms with Srebrenica when they are surrounded by individuals and state actors who are trying to rewrite history by denying that the horrific genocide actually happened?

Another apparently insurmountable obstacle to reconciliation is the lack of commitment among Bosnian Serbs to the national sovereignty and territorial integrity of a multi-ethnic Bosnia. In hindsight, we can see that the recognition of Republika Srpska by the 1995 Dayton Peace Agreement as one of the two political entities forming Bosnia has created an enduring fallacy of “peace” through rewarding aggressors for their campaign of death.

Republika Srpska was proclaimed by Karadzic in 1992 as part of the process of creating an ethnically pure “Greater Serbia”. The territory was carved out violently by Bosnian Serb forces through the ethnic cleansing of non-Serbs.

Today, the Serb statelet that Karadzic and his acolytes fought for is a reality in Bosnia. The significant autonomy of Republika Srpska in many areas, including education, policing and the management of internal affairs, place it just a step away from becoming an actual state.

Acknowledging this vicious prize secured thanks to Dayton, the leaders of Republika Srpska have over almost a decade occasionally been using the secession card, and threatening to declare independence from the rest of the country. For example, in recent political bickering, following the constitutional court’s judgement to allocate unclaimed agricultural land to the central state of Bosnia rather than Republika Srpska, Bosnian Serb President Dodik once again repeated his calls for a secession referendum, saying “Goodbye Bosnia, welcome RS-exit”.

On a daily basis, the extension of this toxic mentality can be seen in the hate crimes directed against Bosnian Muslim returnees. Even though the Dayton Agreement guarantees the right to return of every displaced person and refugee to their pre-war homes (as does, in fact, international law, regardless of where the refugees come from), some of these people have been subject to physical or verbal attacks inflamed by ethnic hatred in Republika Srpska where now they constitute a minority.

Amid calls for secession and the ongoing hate crimes, we have to doubt if nationalist Serbs really learnt anything from what happened in Srebrenica. It is also doubtful if they will commit to making sure that no such massacre will ever happen again.

As long as this continues to be the case, with no formal apology or reparations in sight, Bosnian Muslims have every right to be wary of any sort of reconciliation. Twenty-five years down the line, reconciliation still seems impossible.