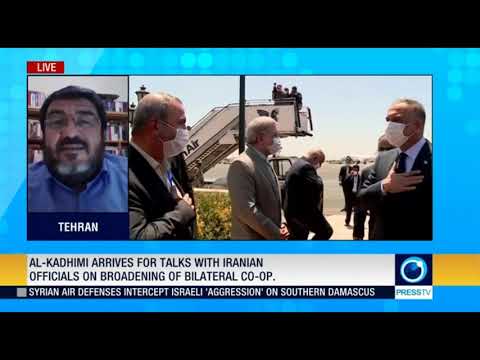 Ann Arbor (Informed Comment) – Iraq Akhbar (Iraq News) reports on the first visit of Mustafa al-Kadhimi as Iraqi prime minister to Iran. He met with Iran’s clerical Leader, Ali Khamenei, on Tuesday. Khamenei said that Iran wants to see “a strong and independent Iraq that enjoys full sovereignty and internal cohesion.” He pledged never to interfere in the internal affairs of Iraq.

Iran stands accused of backing Shiite militias inside Iraq that are not fully under the control of Baghdad.

Khamenei then went off on the United States, calling it “Iraq’s enemy in the truest sense of the word” and alleging that Washington does not want to see Iraq independent, and does not want to see its government represent the views of the majority in the country or respect the prime minister. The Americans want, he said, to recreate the position of American Viceroy over Iraq that had been occupied in the Bush era by Paul Bremer.

He added, “Iran expects that the decision of the government and people of Iraq to expel the Americans will be implemented, since their presence leads to tensions.”

Shiite militias and the US military have been fighting a shadow war in Iraq, with the militias attacking bases with US personnel and firing rockets into compound of the US embassy, in a bid to convince the US military to leave the country.

For his part, al-Kadhimi stressed the geographical and historical links of the two nations. He said, “Iran was among the first countries to stand with Iraq in confronting Daesh [ISIL], and we will never forget that stand.” He said that Iraq is now standing with Iran in its moment of economic crisis.

Al-Kadhimi pledged that Iraq would never allow any threat to Iran from Iraqi soil.

This is a sore point, since the US military in Iraq could use that country as a springboard for an attack on Iran. On Jan. 3, Trump had Iranian Gen. Qasem Soleimani assassinated by drone at Baghdad International Airport, without seeking permission from his Iraqi hosts.

In a joint press conference with Iranian president Hassan Rouhani, Al-Jazeera says that al-Kadhimi underlined that both Iran and Iraq faced the crises of the coronavirus and the cratering of oil prices, and both challenges required close cooperation between the two government.

Rouhani affirmed that the two countries wanted to double their annual bilateral trade to $20 billion, to build rail links between the two countries, and that Iran was ready to send medical supplies to Iraq to help fight the coronavirus. They discussed opening back up their borders after the closure to prevent the spread of Covid-19

Among the subjects discussed were the $3 bn. in debt that Iraq owes Iran for the importation of electricity from that country for provinces such as Maisan. Although Iraq is an oil country, US and UN sanctions on its infrastructure in the 1990s devastated its infrastructure and it still cannot generate as much electricity as it needs, and must depend on Iran. Al-Kadhimi hopes to work out a repayment schedule during this trip. Iraq is still exporting millions of barrels a day of petroleum, and so has a fair income stream, while the Trump invisible blockade on the Iranian economy has left Iran unable to export much oil except to China, and its economy is thus suffering greatly.

Although the US Department of the Treasury is threatening severe sanctions against countries that do business with Iran, it has so far issued waivers to Iraq, which could not survive any attempt to cut Iran off.

Al-Kadhimi, who became prime minister in May after having headed Iraq’s internal security for 4 years, is a Shiite Muslim, and has the backing of most of the Shiite parties in parliament, which see Shiite Iran as a friend and ally. Al-Kadhimi, however, is a centrist and a pragmatist who helped oversee the fight against the Sunni extremist group ISIL in northern Iraq, in close collaboration with the US military. He has also pushed back against the lawlessness of some Iraqi Shiite militias that are backed by neighboring Iran.

All of this is to say that al-Kadhimi is not so much making a pilgrimage to Tehran as seeking good relations with one state among others. He has on his docket a trip to Saudi Arabia, Iran’s arch-rival, as well. And while he is behind the scenes negotiating the departure of US troops, as demanded in January by the Iraqi parliament, he isn’t about summarily to kick them out, since he thinks he still needs them for mopping up operations against ISIL.

Press Plus: “Iraqi PM in Tehran for high-level talks on first foreign visit”