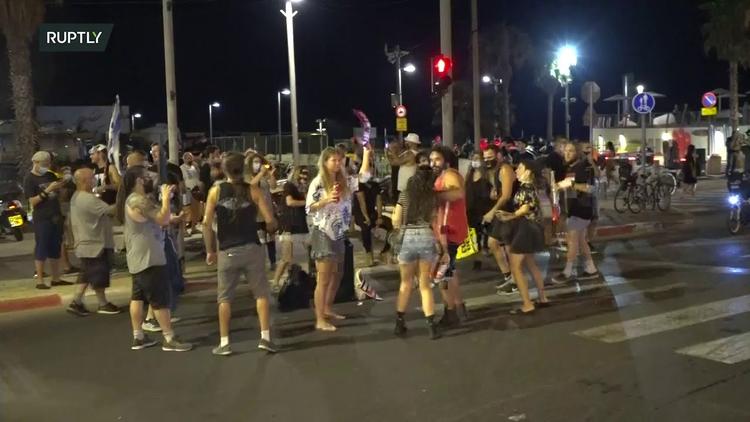 Ann Arbor (Informed Comment) – Nir Hasson and Bar Peleg at Haaretz report that demonstrations broke out again Saturday in Tel Aviv and Jerusalem, as well as some smaller towns, against prime minister Binyamin Netanyahu. The crowds consisted of a diverse set of groups, some of them outraged that Netanyahu was allowed another term as prime minister even though he will shortly go on trial on corruption charges. Others are upset by his attacks on the attorney general and on the rule of law generally. Still others fault him for poor handling of the coronavirus pandemic and the economic crisis that has ensued. (Some deny the need for mitigation measures; others seem to feel as though they would not still be necessary if Netanyahu had not opened back up too soon, in mid-May).

Israel registered 1,324 new coronavirus cases on Saturday, and nine new deaths by Friday night, bringing the death total to 401, according to The Times of israel. Given Israel’s population of 8.8 million, that is the equivalent of 50,000 daily cases in the United States, and of a daily death toll of 337 or so. These proportional totals are only slightly smaller than the actual numbers this July in the US, which is one of the world’s worst epicenters of the pandemic because of the poor Federal response under Trump. The national unity government of Netanyahu and Benny Gantz agreed that the country had to go back into lockdown in an attempt at mitigation, beginning this weekend. They wanted to close restaurants except for takeaway and delivery on Friday evening, but postponed the measure until Tuesday because it seemed that the restaurateurs would defy the order en masse. They did close other establishments, limiting gatherings of non-family members to ten indoors and twenty outdoors.

Mahmoud Mujadaleh at Arab48 reports that thousands of protesters gathered in Tel Aviv, while some 1500 people gathered outside Netanyahu’s residence in Jerusalem. In both cities, key thoroughfares were closed by the protests. The Jerusalem protesters were primarily drawn from the Black Flag anti-corruption movement.

In one incident, police turned water canons on the demonstrators, who fought back and took control of the water and the hoses, setting up a confrontation with the police.

The huge crowd of several thousand in Tel Aviv initially gathered at Charles Klore Park and then split up into several processions through the streets to Habima Square. Along the way, there were clashes between protesters and police, in which police complain that the demonstrators used pepper spray on them. They arrested 13. An important component of the Tel Aviv protests were the self-employed, small business people and restaurateurs, who had tried to mount a rally on Wednesday but were refused permission, ostensibly because of the difficulty of social distancing. Self-employed and small businesses have been hurt by shutdowns provoked by a resurgence of the pandemic in israel. They chanted for Netanyahu to resign, and, according to i24, that “Your corruption is killing us.”

Israel has long suffered from income polarization, being one of the more unequal societies in among the OECD countries. But while over-all inequality flattened slightly (the gini coefficient is 35.5) in the teens, the difference between the bottom ninth decile and the top decile has gotten much worse, according to Ctech. Translation: The least affluent workers are being paid less and less in real terms.

Netanyahu has been a representative of the new class of Israeli billionaires, and his ability to thumb his nose at the law and take favors from his rich patrons has begun to grate on Israelis at a time when the country’s economy is suffering from the Covid-19 recession.

The protests are therefore probably to be understood in some ways as against the Israeli version of Neoliberalism.

What struck me was the similarity of the reporting on how the protesters were treated by Israeli police and the way Palestinian protesters are treated in the West Bank. Of course Palestinians are treated even worse. But the ninth decile of Israelis, and the majority of the country that will not vote directly for Netanyahu or his close allies, are clearly seen by the state as a danger to the status quo.