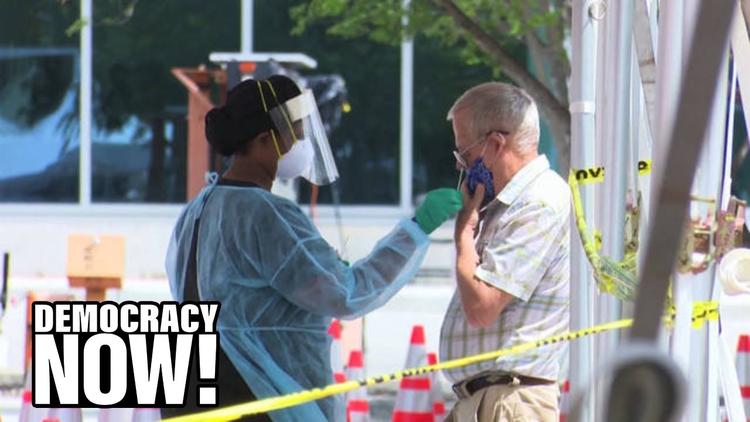 Southwest Harbor, Maine (Special to Informed Comment) – The business press is full of stories about the race for a Covid—19 vaccine. The corporations that succeed in cracking the biological mystery stand to make billions, and the success of the vaccine will likely “open up” the economy. What receives less attention, however, is the question of who pays for the research, and who receives the vaccine first.

As it stands now the questions of who will receive the drug and at what cost are in the hands of the drug companies that market them. Companies hope that their research will lead to a patented drug, which would give them exclusive rights to produce and market the drug. I choose the verb market advisedly because the work of discovery has been paid for largely by the government. Nonetheless the successful corporations can choose whatever the market will bear, a classic monopoly situation fostering massive misuse of society’s resources. Dean Baker and Gerald Scorse maintain: “We now have this bizarre mindset that we have to give drug companies patent monopolies to get them to develop drugs or vaccines, even when the government is paying for the bulk of the research. The pandemic is showing the absurdity of this practice.”

In other words heads I win, tales the public (you taxpayers) lose.

Even when government funds research and discovery costs, big pharma maintains that it still needs monopoly profits to fund ongoing research costs. Yet a substantial portion of these profits go to mass media advertising and political lobbying. A destructive self-sustaining cycle is set in motion. Marcia Angell, formerly editor of the New England Journal of Medicine, puts it thus: “The truth is that drug companies funnel the bulk of their resources into the marketing of products of dubious benefit. Meanwhile, as profits soar, the companies brazenly use their wealth and power to push their agenda through Congress, the FDA, and academic medical centers.”

Baker and Scorse go on to add that the possibility of monopoly profits tempts corporations to provide misleading information on trials and to promote inappropriate use of their drugs. Such actions may result in legal actions, but criminal prosecutions are rare. Civil fines amount to only a cost of doing business.

As with healthcare itself these are unsettled times for both patients and the providers. In a climate where so much attention is paid to the development of life- saving drugs basic reforms are possible. Baker and Scorse suggest that at a minimum corporations receiving government support for research must be required to post results of that work and place any patent in the public domain. The requirement to post new science likely advances our knowledge faster than the quest for secretive information compiled for patent application.. As one superstar put it: “I stood upon the shoulders of giants.” (Isaac Newton)

Advocates of the role that patents play fail to consider the possibility that many research scientists are not motivated primarily by the quest for extreme affluence. I would argue that the current system itself encourages such narrow monetary motivations.

These are modest reforms that would advance both pure and applied science. More attention to and publicity about the role that public science has played and can play is vital today. Governments could also “ create an international prize, say, that awards funds to companies based on the lives saved by their COVID-19 drugs and other essential medicines. That could offset profit as the primary motivation for drug research, development and sales. And if pharmaceutical companies don’t voluntarily help people in poor countries, those governments can do what they’ve done in past health crises: let other companies produce generic versions of patented medicines, to protect the common good.”.( Nicole Hassoun, Director of the Global Health Impact Project)

Nonetheless expect any serious reform proposal to meet fierce opposition. The industry will pull out all the stops to retain its pricing power but could accept an Obama-style means tested subsidy. That may broaden slightly access to life saving drugs but at the cost of all the inefficiencies and social antipathies means tested programs create. There is good reason to continue this fight.

As Amy Goodman pointed out, Jonas Salk was asked by Ed Murrow, “Who owns this patent?” Salk replied, “Well, the people, I would say. There is no patent. Could you patent the sun?”

Democracy Now: “Sonia Shah: “It’s Time to Tell a New Story About Coronavirus — Our Lives Depend on It”