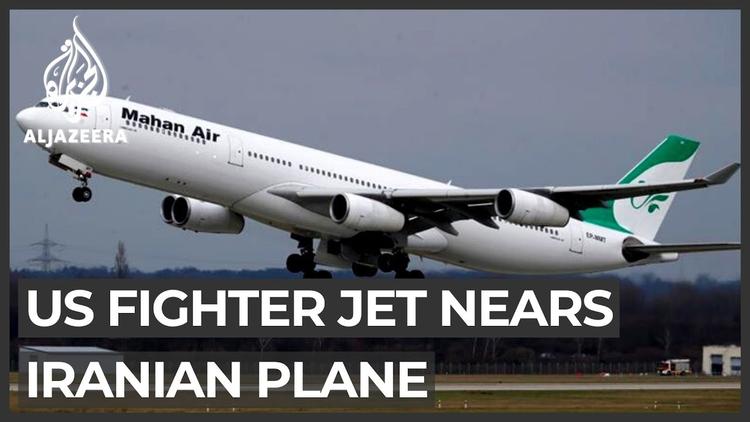 Washington, DC (Special to Informed Comment) – “Americans should not blame others in vain,” Iranian general Esmail Gha’ani has declared, “this is a fire they have lit and today has engulfed them.” Gha’ani, a veteran military commander who heads the Quds Force, the branch of Iran’s Islamic Revolutionary Guard Corps (IRGC) responsible for extraterritorial operations, was speaking about the massive fire that has overtaken a U.S. navy vessel in San Diego.

Gha’ani chose his words carefully. He skirted suggesting that Iran had a role in the blaze, instead saying it was the “result of the actions and crimes of the American government” and was “carried out by American elements” themselves. But he signaled American actions abroad will have costs at home, saying that “very difficult days and harsh incidents lie ahead” for the U.S. and Israel.

The provocative remarks come amid signs of a new level of covert warfare being waged against Iran. The country has been beset by its own mysterious infernos and explosions, including at parks, medical clinics, power plants, ports, factories, a missile production compound, and a nuclear facility. The latter has been attributed to Israel by a source speaking to the New York Times. The incidents also come as the Trump administration has greenlighted the CIA to target Iranian infrastructure with cyberweapons.

The repeat incidents suggest a broader sabotage operation at play. Israel and the U.S. are not strangers to such operations in Iran. However, coming months before the U.S. presidential election, such actions smack of desperation and a last-ditch effort to goad Iran into overreaction and dangerously spike U.S.-Iran tensions yet again.

Israel’s Drive for a U.S. War with Iran

“This is a historic opportunity,” an aid to Israeli Prime Minister Benjamin Netanyahu told journalist Ben Caspit late last year. “You have no idea what we can wheedle from the Americans now, what a golden opportunity we face when the US is about to enter an election year—if we have a unity government headed by [Prime Minister Benjamin] Netanyahu.”

That government has now been formed and Netanyahu is at its helm despite his ongoing trial on corruption charges. But what might the “historic opportunity” look like? Caspit asserts: “Netanyahu’s people, headed by minister Yuval Steinitz clearly state that a widespread war is likely to erupt in the next six months between Iran and its adversaries in the region, including Israel.” Caspit adds that Israeli defense minister Naftali Bennet has been “ramping up the warmongering” and “threatens Iran on an almost daily basis.”

Netanyahu has a long history of agitating for war with Iran. Former U.S. Secretary of State John Kerry has said that during the nuclear negotiations that led to the July 2015 nuclear accord, the Israeli leader “urged” then-U.S. President Barack Obama to “bomb Iran.” Netanyahu himself nearly attacked Iran at least three times in 2010 and 2011, but was blocked to a large degree by President Obama, who opposed such strikes and feared they would lead to a region-wide conflict that the U.S. would be dragged into.

The situation could not be more different with the Trump administration. President Trump has given carte blanche to Netanyahu, whether on annexation of the West Bank, recognizing Jerusalem as the Israeli capital, or adopting a regime change policy toward Tehran. Trump has boasted that reneging on the Iran nuclear deal was “probably the biggest thing I did for Israel.”

According to John Bolton, Trump’s former national security advisor turned nemesis, Trump has already greenlighted Israeli military strikes against Iran. Trump for his part believes a war with Iran would be short. “I’m not talking boots on the ground,” he proclaimed last year. “I’m just saying if something would happen, it wouldn’t last very long.” He has also said that he would not need an “exit strategy” in the event of a war with Iran.

As one Trump administration official has stated, the “ultimate goal” of the current U.S. pressure campaign against Iran is to “draw Iran into an armed conflict with the United States.” But for all the Trump administration’s efforts, the Iranian government has neither taken the bait nor imploded or capitulated.

In the face of overt aggression from the Trump administration, Iran has alternated between restraint and careful counter-escalation. As the Iranian economy has come under a brutal chokehold, Iran has responded in calibrated fashion to demonstrate the costs of maximum pressure while isolating the U.S. internationally and keeping the nuclear deal alive.

Iran is widely believed to be responsible for attacks on Emirati oil tankers last summer and Saudi oil facilities last fall, which occurred after the U.S. ended sanctions waivers for importers of Iranian oil. After the U.S. drone strike that killed Iranian General Qassem Soleimani, Iran also retaliated by launching a ballistic missile barrage at a base that houses U.S. troops in Iraq. Significantly, there were no fatalities in any of these incidents (Iran reportedly gave forewarning to Iraqi officials regarding the Iraq attack).

Iran has enjoyed widespread international support for its efforts to preserve the nuclear deal and restraint in the face of U.S. and Israeli provocations. The U.S. is currently fixated on a far-fetched plan to reimpose United Nations sanctions on Iran, but remains extraordinarily isolated on Iran, including from its European allies. This was exemplified at a recent UN Security Council meeting on Iran, where one country after another lined up to voice support for the nuclear accord and rebuke the U.S. for its approach to Iran.

It now seems possible that the nuclear deal will survive Trump’s sabotage and be resuscitated. Trump is dwindling in the polls and Democratic presidential candidate Joe Biden has pledged to return to the accord and get the U.S back on a diplomatic track toward Iran. For Netanyahu and his allied hawks in Washington, this is the worst-case scenario. Despite all their efforts, they will have lost the “golden opportunity” of the Trump presidency to decisively kill the nuclear deal and trigger a head-on U.S.-Iran war. It is perhaps for this reason that Bolton, longtime ally of Netanyahu and staunch advocate of war against Iran, recently proclaimed that “the next few months are an optimal time for Israel to act in its own national security interests.”

A Hot Summer Ahead

The string of blasts on mostly civilian infrastructure throughout Iran should be seen in the context of ongoing efforts to ratchet up U.S.-Iran hostilities. The pernicious pressure campaign against Iran being taken inside the country’s borders tests the limits of Iran’s restraint and invites more fierce reprisals. Already, a media narrative has taken hold that Iran’s “limited response” to U.S. actions “could be an incentive for further operations against it,” as the New York Times has stated.

The recent remarks of Gha’ani, who is Soleimani’s successor, indirectly warns the U.S. of increased costs to America if it continues its current policy. However, Netanyahu and his allies in Washington have likely pinned their hopes on Iran providing a casus belli for further escalation. Any violent reaction from Iran could be seized upon to shift global opinion and engulf the U.S. in a conflict that a Biden administration could not easily undo.

President Trump remains committed to escalating against Iran even as the U.S. battles a worsening pandemic, an economic depression, and internal discord not seen in decades. In May, Trump even vetoed legislation that would prevent military actions against Iran without Congressional authorization. As Trump’s prospects for re-election fade, a dangerous stage has been set for conflict in the months ahead.

Sina Toossi is a senior research analyst at the National Iranian American Council, where he conducts research and write about US-Iran relations, Iranian politics and Middle East policy issues. Formerly he was a research specialist at Princeton University’s Woodrow Wilson School of Public and International Affairs. His writing has appeared in Foreign Policy, Newsweek, The National Interest, The Huffington Post, and the American Conservative, among other outlets. His website is Sina Toossi .