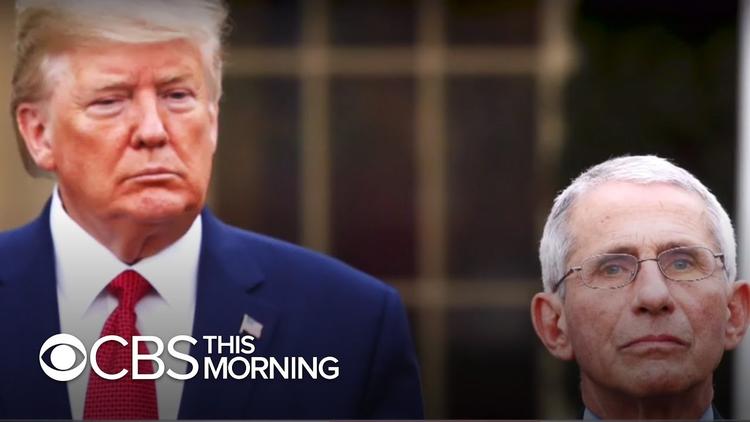 The Washington Post reports that Trump team is focused on undermining Dr. Fauci’s credibility, leading me to wonder how that should even be possible? The Post took it seriously though, suggesting to me that Americans have a serious problem with authority. No, I don’t mean Americans have a problem taking orders. Countless anti-maskers are very good at taking orders via tweet. What I mean is that Americans seem to be confused about where authority comes from.

This was tactfully illustrated on NBCLX last week when the team reviewed expert medical opinion about Covid 19, then cited the President’s views. Immediately they asked how does one know who to believe, implying for a moment that the two sources were equally valid. The question turned out to be rhetorical, but it exposed a contradiction between two, very different notions of authority.

When past presidents made recommendations about health or safety, they were conveying to Americans the advice they had received from officers with expertise in those areas. Naturally citizens took seriously pronouncements from the president. After all, he had access to real experts.

When President Trump addresses the pandemic, he doesn’t speak as an ex officio member of the CDC. He offers his own, private, ill-educated opinion. Without an office or expertise, there is no authority, so it should be obvious to any American that the President’s views are about as valuable as a used face mask.

Some might ask “Well then where do experts get their authority? Doesn’t the president outrank them?” Expert authority actually comes from the value we place on the lives of citizens. The Constitution declares that governments are instituted to secure life, liberty, and safety for citizens. To accomplish that, you need experts, which is why Rousseau, Jefferson and other notables repeatedly declared that officers should be selected for their “genius and virtue.” Back in the 18th century “genius” meant knowledge and ability, while “virtue” meant dedication to the public good.

Presidents rely on departmental appointees and career bureaucrats to promote policies beneficial to the people. When those officers lack expertise, there is no authority, because there is no benefit to the people.

This was illustrated dramatically in a report on Sharpiegate last Thursday. Most of us recall that NOAAA map showing how Hurricane Dorian would not hit Alabama. The President insisted that it would, and to prove it used a sharpie to extend the borderline of hurricane damage to include parts of Alabama. Apparently, he believed that his rank gave him the power to overrule the experts even if that meant misinforming Americans about imminent danger. This would suggest he believed his authority extended

That view of authority was not shared by the Commerce Department inspector general. According to the Washington Post, the inspector general“issued a delayed and harshly critical report laying out how political pressure originating from the White House resulted in the issuance of a poorly crafted and unsigned National Oceanic and Atmospheric Administration (NOAA) statement . . .”

Why was that a problem? Because that statement “damaged NOAA’s reputation for issuing apolitical guidance and eroded public trust in an agency tasked with protecting life and property.”

This understanding of authority is consistent with the aims of the founding generation of Americans, who held that protecting life and safety required “genius and virtue.” Mick Mulvaney, however, Director of OMB, shared the President’s understanding. He ordered that the Commerce Secretary “have the public record corrected in favor of the president,” resulting in that “poorly crafted” statement.

The President and Mick Mulvaney drew upon a notion of authority that has deep roots in premodern European history: authority as title. Where a modern office has a charge requiring expertise to fulfill, premodern titles only signified privilege. Privilege meant authority without limiting conditions such as a charge or the need for expertise. Expertise wasn’t required because the ultimate value was the title itself, not the lives of the citizens, who were merely subjects. Sound familiar?

How would an arcane notion like that get into the U.S. system of governance, which takes the life and liberty of citizens as its purpose? In her book The Divine Right of Capital, Margorie Kelly argues that feudal notions of authority survive in the modern corporation. Her comparisons are by no means arbitrary:

“Like a feudal estate, a corporation is considered a piece of property-not a human community,” so not only the physical plant and equipment, but the workers’ labor can be bought and sold “like cattle” as Voltaire would say.

“Corporations function with an aristocratic governance structure,” where only members of the propertied class have the privilege of a vote.

“Corporate capitalism embraces a predemocratic concept of liberty reserved for property holders.” For the framers of the Constitution, liberties and freedoms were to be enjoyed by all citizens, but the pre-Revolutionary meaning of these terms was “privileges” restricted to the wealthy. When corporate apologists today speak of “freedom,” what they have in mind is the pre-Revolutionary sense of the word.

During Trump’s election campaign we often heard the meme that he was qualified to be president because, after all, he was a successful business man! Indeed, he had been the CEO of numerous failed enterprises. Perhaps this explains his understanding of authority: he simply transferred the feudal idea from the corporate world into the world of governance.

The confusion of these two, radically different notions of authority affects the way Americans understand elections. The feudal idea is that elections confer the authority of the people directly onto a candidate to use however s/he pleases. There is no obligation to the office’s charge, much less to the lives of citizens. The authority conferred by election becomes a privilege, and so facts become irrelevant.

The Constitution suggests otherwise: officers have authority to carry out their charge for the betterment of the lives of the citizens. When expertise is compromised, the people’s lives suffer, and the officer’s authority evaporates.

Gina McCarthy, former director of the EPA, explained the difference when commenting on her successor Scott Pruitt: “Scientific research provides factual support for policies that reduce exposure to pollution and protect the American people from costly and dangerous illnesses and premature deaths. Under Mr. Pruitt’s approach to science, the E.P.A. would be turning its back on its mandate to ‘protect human health and the environment’.”

In this view, elections do not directly confer privileges on a candidate or her appointed officers. Instead, elections appoint candidates to key offices. Their authority still comes from the office, not from their title. The office obligates them to appoint subordinates with the expertise necessary to help them carry out their obligation to foster the people’s life, liberty, and safety. When they fail to do that, they turn their backs on their mandate. When that happens, they replace a modern understanding of authority with an arcane, feudal sense of privilege.

The sooner Americans understand the difference between these two kinds of authority, the sooner we can boot those would-be aristocrats out of office.