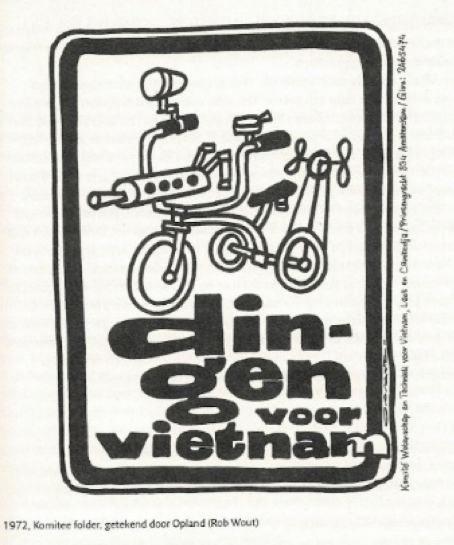 ( Joop) – On 4 March 1971 our train pulled in to Paris’s Gare du Nord station. My then husband Ab van Kammen and I were going to spend a few days in the city. We had left our three daughters with various friends, packed our suitcases and caught the train. It would not just be a pleasure trip, for Ab had been invited to take part in a mission connected with the Vietnam war, which was then at its height. People in many countries, including Holland, were by now aware of the impact of the Americans’ fierce bombing of North Vietnam, and action groups had been set up all over the world to help its suffering people. University students, sometimes backed by their lecturers, often played a major part in the work of such groups, including the Medical Committee Netherlands-Vietnam and the Science and Technology Committee for Vietnam, Laos and Cambodia. As a member of the latter body’s committee of recommendation, Ab had now been invited to join a visit to the Vietnamese mission in Paris. He had previously been one of the members of an international movement that had taken responsibility for the societal implications of their discoveries after the Second World War – concerned about nuclear armaments and the role scientists had played in their development, they had organized themselves as the Verbond van Wetenschappelijke Onderzoekers (Alliance of Scientific Researchers).

The napalm dropped on North Vietnam by American planes was intended to starve the population by destroying their harvests, and above all to defoliate large numbers of trees. This would make it hard for people to find shelter, and would make them easy targets for cluster (or fragmentation) bombs. Such bombs have little effect on military targets such as buildings and vehicles, and are mainly used on human targets, whether fighters or civilians. When they reach the ground they break up into smaller bombs known as clusters, which in turn break up into even smaller bombs that scatter sharp metal fragments. Some do not explode at once, but only when they are touched later on – often by children. The fragments pierce human flesh, causing serious bleeding and migrating on into tissues and organs where they cause dreadful pain and are hard to trace. Someone with such injuries needs constant care from several people, and this even appears to have served as an advertisement for these weapons: a single cluster-bomb strike can put not just one fighter out of action, but a whole group of them in one go.

The Vietnamese people defended themselves against such warfare by digging a vast underground network of tunnels that provided at least some protection. The Science and Technology Committee included Dutch students from Delft University of Technology, who had designed equipment for the North Vietnamese. They had devised a portable X-ray machine that could be used in the underground tunnels to trace the tiny bomb fragments. There was no point in operating on the entry wounds, for the fragments had long since disappeared. Since American bombers could detect infrared radiation from the air, the machine and the accompanying generator had been designed to produce as little heat as possible. The students had brought the North Vietnamese a blueprint and afterwards they would build the device themselves. It had to be shown to them at the mission in Paris, for Holland did not recognize the Democratic Republic of Vietnam (as North Vietnam was officially known) and the two countries did not have diplomatic relations.

As we emerged from the Gare du Nord we saw the small group of students waiting for us: three young men in cut-off jeans, their long hair blowing in the wind, and a girl in a denim miniskirt and a tank top made of self-crocheted dishcloths. They were standing next to the deux-chevaux car in which they had travelled down cheaply from Holland. The idea was for us to drive to the house some way south of Paris where the Vietnamese had their mission; but when the students saw me next to Ab, I could hear them muttering to each other ‘And what do we do with her?’ We couldn’t all fit into their car, and after some to-ing and fro-ing it was decided that two of the young men would go there by public transport. I felt awkward, unused as I was to being treated as ‘the wife’, and suddenly realized how much we contrasted with these young people – me in my below-the-knee skirt and high heels, Ab in his neat jacket and trousers.

In the car they told us all about what they were doing. Besides the portable X-ray machines, they were developing surgical lamps that would run on dynamos in the underground tunnels. Because injured people arrived in huge groups, many such lamps were needed all at once. Cluster bombs were nearly always preceded by an ‘ordinary’ bomb; when people rushed in to help the victims, the cluster bomb was dropped on them. In the absence of surgical lamps, they made do with bicycle lamps; the bicycle dynamo was driven by putting the front wheel in neutral and pedalling fast. This also produced little heat, and could hardly be detected from the air.

The students told us how amazed they were to be backed by some of the teaching staff in what they mockingly dismissed as ‘our right-wing bastion in Delft’. Although the lecturers had initially been reluctant to oppose Holland’s American allies, they now felt they could not square what was happening in Vietnam with their consciences. Not that they automatically supported communist North Vietnam or the Northern-backed rebels in the South; but they had decided they could no longer uncritically accept the black-and-white Cold War dichotomy between the ‘capitalist West’ and the ‘communist East’.

On arrival at the mission we were welcomed by five women and two men who nodded and bowed to us politely. They were all smaller and thinner than we were, and dressed in the same sober grey colour: the women in two-piece outfits buttoned up to the neck, and the men in suits. We sat in a wide circle of armchairs round a low table, with the students trying in vain to hide their long, bare legs; and while tea was being served they began explaining to our hosts in perfect French what they had come here to do. There was an animated discussion in which the current situation was compared with the previous months. News was exchanged about the dispatch of the technical equipment by the Medical Committee Netherlands-Vietnam, along with their own medical materials; and assessments were made of how the war would progress over the coming months. It was heart-warming to see how well informed the students were, and how respectfully the two sides communicated.

At one point one of the students produced a rucksack from behind his chair, and unrolled a large sheet of paper with lines and figures printed on it in blue. Our hosts looked with interest at the blueprint of the X-ray machine, and asked questions which the students answered; but suddenly I could see them glancing at each other in dismay. In their enthusiasm the students did not notice this, and they went on pointing to blue lines and giving explanations – until the Vietnamese made clear to them that they should stop.

We were then told the Americans were no longer making the fragments in the bombs out of metal, but were now using a hard plastic that could no longer be detected by X-rays. Incredulous, we sank back into our chairs. The students looked shocked, and began talking all at once in agitated voices. How could this be? And was it even true? Where had the report come from? How long had this been the case? Yes, the Vietnamese nodded, it was quite true; at first they hadn’t wanted to believe it themselves, but there was no escaping the inexorable truth. I could see a mixture of sadness and anger in their eyes, and in their despair they began to apologize, as if it were their fault. They were terribly sorry, but the X-ray machine could no longer be used to detect the bomb fragments. They wished things were different, but that was the way it was… And they really did appreciate all the work the students had done.

When everyone had calmed down a bit, the Vietnamese tried to keep the students’ hopes up, saying they should go ahead anyway and build the X-ray machine, as well as the generator – for there were still plenty of people with metal bullets and fragments of shells and ordinary bombs in their bodies. The students were assured that their machine would be put to good use.

And so, in the May-June 1973 issue of the Medical Committee Netherlands-Vietnam’s Medical Bulletin, the report on the previous year contained the words ‘Dispatched: six complete portable X-ray machines, including electric generators’.

Scientists in the United States were also horrified by the ‘improvement’ to the cluster bombs that had made the fragments invisible. The 11 September 1971 issue of the Dutch weekly news magazine De Groene Amsterdammer, which former editor Maarten van Dullemen has retrieved from his extensive archives, included the following report headed NOORD AMERIKA (‘NORTH AMERICA’):

‘For some time a “Science for Vietnam” movement has been active in the United States … Much of its research is focused on the most conspicuous consequences of the American war of destruction … treatment of injuries caused by cluster bombs. As we now know, one of the latest “improvements” to this weapon, which breaks up into dozens of tiny bullets that then follow almost undetectable paths in the body, is that the bullets are now made of plastic, and so can no longer be seen on X-ray screens. The members of “Science for Vietnam” are trying to develop injectable substances that cling to the plastic bullets so that they can be seen on X-ray screens, and to find out whether they can be made visible with the help of radar or sonar equipment.’

In the years that followed, numerous action groups and organizations around the world worked long and hard to get the development, production and use of cluster bombs banned. In December 2008, representatives of a hundred countries gathered in Oslo to sign the Convention on Cluster Munitions. One of the signatories was Holland, and other countries have since joined. But they do not include the main developers, producers and users: China, India, Israel, Pakistan, Russia, Turkey and the United States.

What is now known as the ‘Military-Tech Complex’, in which the United States plays a key role, is still working manfully to develop new, ‘smart’ bombs – above all by trying to reduce the proportion of unexploded bombs to less than 1%, for instance with the help of built-in software. For there is a stubborn determination to keep on using cluster bombs; and even today it is hard for activists to discover what kind of weapons will be developed, and how they will be ‘improved’. For this they still depend on the commitment and ingenuity of intelligent young scientists who, just like the students that developed the portable X-ray machines, are using their knowledge to help civilians protect themselves against air raids.[1]

[1] With thanks to Dr Jolle Demmers, professor of Conflict Studies, Utrecht University.

Reprinted with author’s permission from Joop