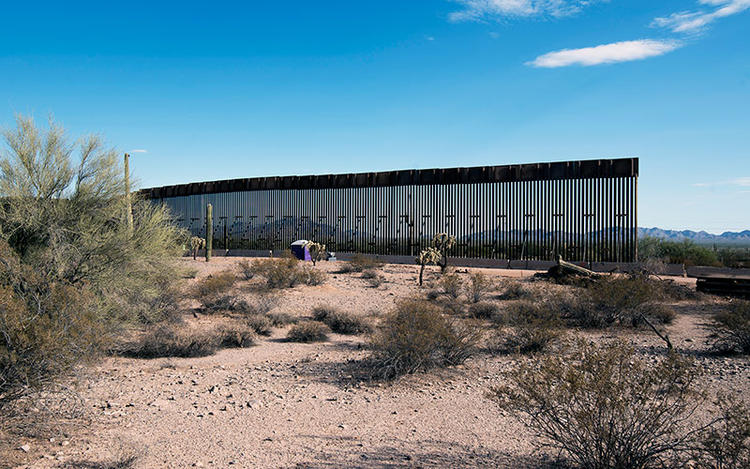 ( Cronkite News) – Wedged between a sprawl of saguaros and a busy highway in Mexico, Quitobaquito is a tiny oasis.

Wildlife and Indigenous communities have long relied on this rare spring system for fresh water in the middle of the Sonoran Desert.

The spring flows into a pond just a few paces from the U.S.-Mexico border at Organ Pipe Cactus National Monument in southern Arizona. Hia C-ed O’odham and the Tohono O’odham tribal members lived and passed through here long before the monument or the border existed. 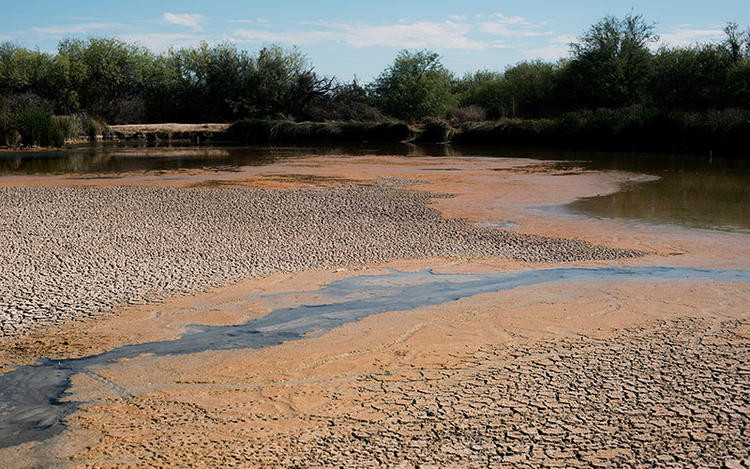 Amber Lee Ortega has family from both tribes. This site is where some of her relatives are buried. Hia C-ed O’odham families lived here until the 1950s, when the property was acquired by the National Park Service.

“It was a traditional homestead for O’odham, for Hia C-ed O’odham,” Ortega said. “That was where they lived. They had huts. They had farms. They had ceremonies.”

Unlike the Tohono O’odham, Hia C-ed O’odham are not recognized as a tribe by the U.S. government. Ortega said for a lot of people, Quitobaquito is one of the last places that feels like home.

“I can feel my ancestors there, you just feel them,” she said. “You feel the history. You feel the stories. You hear the songs. You feel it. There’s life; there’s history; there’s strength there. It’s our roots.”

Ortega has been making trips to Quitobaquito every month since last August, when the Trump administration first started building a 30-foot border barrier across Organ Pipe Cactus National Monument. Ortega said the spring has never looked worse than it does now.

“It’s extremely different, and it happened extremely fast,” she said.

Ortega is not the only one concerned about the Trump administration’s border wall construction and its potential effects on the spring’s flow.

Quitobaquito is the only natural habitat in the country for such endangered as the Sonoyta pupfish and mud turtle. University of Arizona professor and ecologist Michael Bogan said he’s awed by the sheer abundance of life there.

“You’re at this place, the spring, in the middle of one of the driest parts in the Sonoran Desert, and yet it is jam packed with aquatic life,” he said.

This summer, the pond has sunk so low that cracked mud flats appear in several places where water used to pool. Bogan said the spring used to flow at about 30 gallons per minute but has been in decline for years. Yearly flow now averages about 10 to 15 gallons per minute.

In mid-July, U.S Geological Survey data showed a flow of 5.5 gallons per minute, which Bogan said is the lowest it’s been in more than a decade.

“I know that when there were some leaks previously, the water level got that low, but I think it’s really the combination of the shocking aesthetic of the low water in the pond but also the declining spring flow,” he said.

The rest of the landscape also is changing. Contractors hired by the Department of Homeland Security are building a 30-foot tall border wall across almost 30 miles of the monument. That involves digging trenches, widening roads and pumping groundwater to mix concrete.

Bogan said what’s happening now at the spring and its pond have been years in the making, but recent construction activity could be making things worse.

“What we have here is basically a worst-case scenario where we have declining spring flow, declining water coming into the pond and a structural problem with the pond itself. And then the construction traffic, heavy duty trucks and trenching,” he said. “On top of that, we’re in the hottest month of the year.”

Rijk Morawe, resource manager at Organ Pipe Cactus National Monument, said the pond has been leaking intermittently since 2006 and got worse in January. He said years of drought and agricultural drilling in neighboring Sonora have depleted the aquifer that feeds the spring. This is the first year the spring’s levels are being continuously monitored. Morawe said the numbers are concerning, but he’s skeptical of some of the data so far.

“We’re not really confident in the data we’re getting from the transfuser,” he said.

Morawe said the monument made a few of its own spring measurements in July that show a faster flow. USGS stands by its collection methods, and officials there said they monitor the device frequently. They said some extreme dips and spikes could be attributed to algae getting caught in the system or a mud turtle passing through.

Last fall, Customs and Border Protection said it would need 84,000 gallons of water per day but agreed not to drill within 5 miles of Quitobaquito. Morawe said Organ Pipe national monument has requested up-to-date extraction figures, but the government hasn’t given them.

Thomas Meixner, a hydrologist with the University of Arizona, said that’s probably true, at least for now.

“What’s the specific impact of the border wall construction? Right today, it’s hard to attribute how much of it. In the long run, we know it’s going to have an effect,” he said.

Meixner said that’s because the effects of groundwater extraction don’t show up that quickly. Still, he said any additional drilling from the aquifer should be avoided because the water level will be affected eventually. 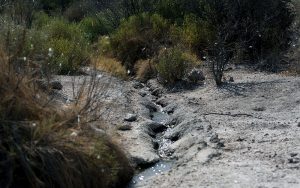 A well for the border wall is 7 miles west of Quitobaquito on the Cabeza Prieta National Wildlife Refuge, Morawe said. Another one sits within Organ Pipe’s boundary, about 8 miles east of the spring. The impact from those distances wouldn’t have appeared in the past few months, Meixner said, but will show up eventually.

Scientists still are studying Quitobaquito, the Sonoyta River across the border and the deep aquifer that feeds them both, Meixner said.

Another researcher, University of Arizona agricultural ecologist Gary Nabhan, has been visiting the spring as well.

Nabhan said the spring system is unique in the Sonoran Desert, which used have more spring-fed wetlands.

“This went from the most biodiverse and culturally rich habitat complex in the Sonoran Desert to being the last oasis that had any of those elements because we’ve dried up so many other ones with groundwater pumping elsewhere,” he said. “And even after those hits, it survived until the Border Patrol began the wall construction, the groundwater pumping, the dynamiting and the disruption of the vegetation that supports habitats and food for animals who have come to the oasis for thousands of years.”

Nabhan and Meixner are some of more than 25 hydrologists and ecologists who co-signed a letter asking U.S. government officials to halt construction within 10 miles of the desert oasis.

“It has to be related to the new well pumping and dynamiting right along the fault line that the springs occur on,” Nabhan said.

Customs and Border Protection declined to answer questions about water usage and well location, but said in an email that the agency is monitoring spring levels and consulting with U.S. Fish and Wildlife to minimize damage.

Alisa Reznick is a journalist and photographer from Flagstaff, Arizona. Her work focuses on migration, the environment and human rights and appears PBS, TIME, Al Jazeera and NPR, among others. She is based between Amman, Jordan and the American Southwest.

This story is part of ongoing coverage of water in the western U.S., produced in collaboration with Arizona Public Media and public radio station KUNC in Colorado.