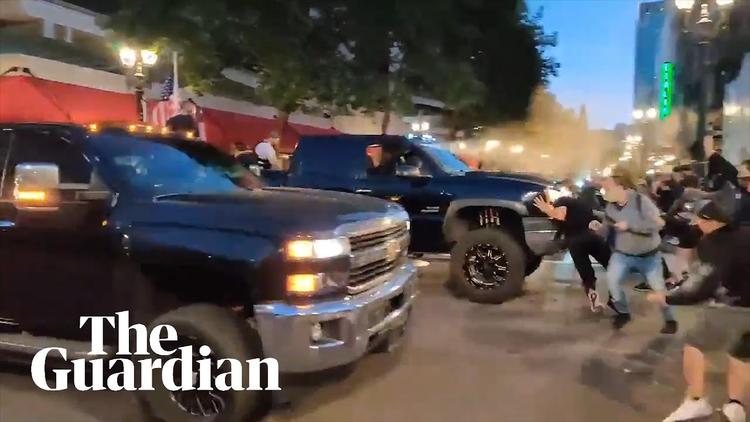 I don’t think it’s hyperbolic to argue that Don the Con Trump has re-ignited a second Civil War in America; considering that armed vigilantes have responded to his prompting with shows of armed force at multiple state capitals and city halls, and now murdered good American citizens as a response to his perverse call to action. The Republican Party always had undercurrents of racism, aside from the “liberal” faction known as the Ripon Society. Many never were satisfied with the results of the Civil War.

The Republican Party wasn’t the Party of Lincoln for long after he died. His successor did his best to mitigate the gains of the Civil War during Reconstruction, and preserve the impact of slavery with Jim Crow laws. Richard Nixon’s southern strategy was a notorious appeal to racism with coded dog whistles, including the theme of “Law and Order,” which Trump has claimed as his own.

Ronald Reagan’s 1980 campaign launch near the gravesites of three civil rights martyrs in Philadelphia, MS characterized his presidency. Trump’s appeals to fear and racism loathing are as frightening as the George Wallace speeches I heard on the car radio when he was running for president. Those who live by hate die by hate; my Black friend and I, on our way home from school in May, 1972, heard on that same car radio that Wallace had been shot.

I’ve often cited the popular Southern folk interpretation that the last battle of the Civil War occurred in Oxford, Mississippi, when James Meredith enrolled in graduate school at Ole Miss.

We thought that was the last battle, until Trump issued the all-clear signal for the Rebels to come out and act out.

Trump’s defiant defense of Confederate heritage is a perverse thing for a real estate huckster from Queens. But it is no more strange than his embrace of Evangelical Christianity and the most extreme goals of far-far right wing Zionism. It’s all a reality show after all, and a brazen con in service to his brand. This is a much bigger reality show than Trump envisioned, but then he’s not much on forecasting.

The murders of innocent Americans by right-wing vigilantes are a direct consequence of their empowerment by Trump’s increasingly incendiary and reckless rhetoric. So is the dramatic level of violence linked to Anti-Semitism and racism. That some Jewish Americans are enabling him is beyond shameful.

Trump has fomented a second Civil War in America in service to his ego and brand. This is an unintended but inevitable consequence because he recognized the Republican Party’s undercurrents of racism, and fully actualized and monetized them.

What this reality show needs is for someone to fulfill Ned Beatty’s role from Network in real life. For most people the takeaway from that film is the iconic, “I’m mad as hell and I’m not going to take it anymore.”

That one is certainly apposite again. But one of my favorite scenes in cinema history is when Howard Jensen (Beatty) invites Howard Beale (Peter Finch) into the grand conference room, and after a cordial welcome stands at the other end of the table and bellows, “You have meddled with the primal forces of NATURE, Mr. Beale, and you will atone! Am I getting through to you, Mr. Beale? . . . “

Network: You have meddled with the primal forces of nature!

Joe Biden and Kamala Harris are best positioned to deliver that speech. Joe will be a great president, but Kamala has the prosecutorial experience as SF City Attorney and California Attorney General. She has the chops to convey this apocalyptic message with gusto and passion. And wouldn’t it be grand to see Trump take that from a woman in the final scene before he is hauled off?