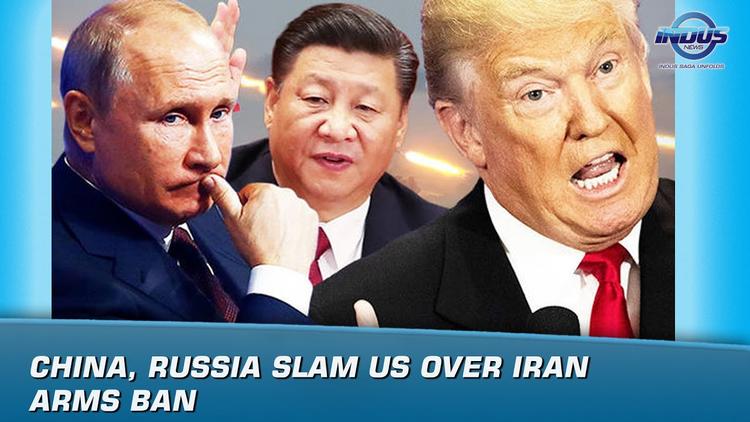 Ann Arbor (Informed Comment) – LeMonde reports that France, Germany and Britain have rejected the Trump administration’s attempt to reimpose UN Security Council sanctions on Iran that were revoked in early 2016 with the signing of the Iran nuclear deal (Joint Comprehensive Plan of Action or JCPOA).

Their joint statement said, “France, Germany and the United Kingdom note that the United States ceased to be a participant in the JCPoA in the wake of its withdrawal from the accord [in 2018].”

Their foreign ministries underlined that they could “not support this initiative, which is incompatible with our current efforts to support the JCPoA . . . We remain engaged in favor of the JCPoA in spite of major challenges engendered by the withdrawal of the United States, and we are convinced that we must treat the question of the systematic non-compliance by the Iranians with their obligations under the JCPoA via a dialogue between the participants in the accord. We call urgently on Iran to reverse all its steps that are incompatible with its nuclear obligations and to return without delay to full compliance.”

This is a stronger stance, and a more vigorous rebuke, to the US that the informed and canny Crisis Group had expected from the Europeans, and sounds precisely like what Russia and China have been saying.

US secretary of state Mike Pompeo accused Europe of siding with Iran’s ayatollahs. I’m not sure what he expects to accomplish with this ayatollah-shaming, except to further anger his erstwhile allies, whom Trump has decisively alienated. Iran is elated.

The Iran nuclear deal was signed between Iran and the permanent members of the UN Security Council plus Germany in 2015, including the United States. It offered Iran an end to all international sanctions if it would mothball 80% of its civilian nuclear enrichment program, which was for making fuel for its three nuclear reactors to produce electricity.

In May, 2018, the Trump administration breached the treaty. The document contains a provision that allows any signatory to invoke “snapback,” restoring the UNSC sanctions on Iran enacted in 2007, if it can show that Iran did not fulfill its obligations under the treaty. Secretary of State Mike Pompeo has argued that since the US is a signatory, it can still invoke snapback.

Europe is raising one eyebrow and exclaiming, “You must be joking, monsieur!” The US ceased to be a participant in the Iran nuclear deal in May, 2018, and has no standing to now invoke the snapback clause.

The wild and wacky Trump administration is perfectly capable of maintaining publicly that international UNSC sanctions on Iran have been restored even if no one goes along with Washington, of course. But it is simply a form of political theater.

Since the US is already threatening third party sanctions on countries that deal with Iran, Washington is unlikely to be able to find new ways to twist Europe’s arm.

For its part, Russia is openly defying the Americans and continuing to deal with Iran. China’s Xinhua news service reports that Russia’s Sergei Riabkov, the deputy minister of foreign affairs, declared Thursday that Russia will not cease its cooperation with Iran, despite American threats of sanctions. He said, according to the RIA Novosti press agency, “We are guided exclusively by our own interests and our obligations to international law.” He was indirectly responding to US secretary of state Mike Pompeo’s threat to sanction countries that opposed US efforts to reimpose sanctions on Iran.

Riabkov said that Russia condemns the US intention to reestablish UN sanctions against Iran. He accused the US of tying the UN Security in knots with its “irresponsible enterprises,” and preventing the world body from undertaking a large contingent of questions relevant to its mandate. Nevertheless, he said, Russia would continue its dialogue with the US.

China called the US move “illegitimate.” Beijing is preparing a wide-ranging program of investment in and trade with Iran valued at a mind-boggling $400 billion over 25 years, and clearly does not intend to allow Trump’s antics and Pompeo’s posturing to get in the way.

Iran fully complied with the letter of the treaty until Trump breached it and imposed a financial and trade embargo on Iran that destroyed its petroleum industry and left it penniless. Europe was threatened with third party sanctions by the US Treasury Department and so was dragooned into going along with Trump’s blockade of Iran, much to the dismay of Tehran. Iran’s government can’t see why it should perfectly comply with a treaty when it has not only received none of the sanctions relief promised but has actually had much more severe sanctions imposed on it than when it had the full enrichment program.

So, Iran has acted out a bit to pressure Europe, but in relatively minor ways. It wasn’t supposed to enrich higher than 3.67% but it went to 4.5%. This is a merely symbolic protest. You can’t do anything with 5% enriched uranium but use it for reactor fuel, same as 3.67%. The European members of the Security Council seem to me to be quite unreasonable in wanting Iran to remain in complete compliance even though they are complicit with Trump in destroying the Iranian economy. Where are Total S.A.’s and BP’s investments in Iran? What have the Europeans bought from Iran, as the standard of living of its people has plummeted under Trump’s tender mercies. Would France put up with being treated this way?

Anyway, as with the vote last Friday in which the US could only find one ally (the tiny Dominican Republic) among the 14 other UNSC members for its resolution extending an arms embargo on Iran, so in this snapback move, Washington will go down to defeat. As for sanctions, the UN Security Council members likely believe that they only have to hold out until mid-January, and President Biden will rejoin the JCPOA, saving it and allowing them to jump into Iran trade and investments with both feet.