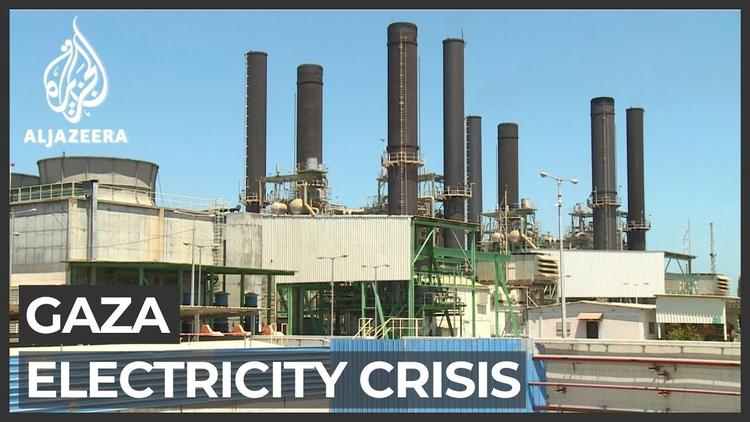 The denial of fuel to the Gaza Strip came in response to Hamas sending ammonium balloons over Israeli territory with incendiary materials attached. The balloons have caused some brush fires. The balloons are intended to protest the Israelis reneging on their pledges to ease the blockade of the Gaza Strip. Israel keeps the 2 million Palestinians there in the world’s largest open air prison camp.

Israeli fighter jets have bombed Gaza on several occasions during the past week.

The Israelis have also stopped Palestinians from fishing, denying the population a key source of protein and interfering in livelihoods.

Before the cut-off of fuel, the Gaza Strip had electricity for 6 hours, then none for 10 hours, in an ongoing cycle. Now they will have electricity for only 4 hours daily, and that will have to made available by expensive generators. The Israel blockade on the civilian population of Gaza, in effect since 2007, has left the population poverty-stricken, so paying for fuel for generators is a real hardship.

The General Union of Worker Organizations in Gaza estimated that 90% of the Gaza Strip’s factories and workshops would be idled by the closure of the power plant. That is some 500 factories that will be left dark, leaving 50,000 workers unemployed.

Hospital patients are at special risk from lack of electricity. The spokesman for the Gaza ministry of health, Dr. Ashraf al-Qudra, said that the lack of power poses a threat to premature babies nurseries, to patients in intensive care units, and to kidney patients (dialysis needs electricity). It will also halt surgeries and deliveries by Caesarean section.

While the incendiary balloons are condemnable, they do not offer any justification for these forms of collective punishment on a mass scale. Israeli bombing of Hamas facilities might be justified, but not cutting of diesel supplies to the whole population. The denial of electricity to 2 million civilian noncombatants is nothing less than a war crime.

In the wake of the Rwanda genocide, a special court was set up to judge war crimes and Shane Darcy notes, “The Statute of the International Criminal Tribunal for Rwanda (ICTR) enumerates collective punishment as a war crime…”

The Israeli authorities are therefore guilty of committing an ongoing war crime against the Occupied Palestinians of Gaza.

In my experience, many people still believe in the legitimacy of collective punishment, so let me just underline that it is very illegal and that officials who commit it can be tried for it. It was outlawed after World War II because it is the sort of nasty practice in which the Nazis liked to engage. They would take a village and then shoot every tenth villager to, as the French say, “encourage the others.” The individuals shot hadn’t committed any crime.

Usually when someone violates the Geneva Conventions, they are acting like Nazis.

As Doctors without Borders notes,

“International humanitarian law posits that no person may be punished for acts that he or she did not commit. It ensures that the collective punishment of a group of persons for a crime committed by an individual is also forbidden, whether in the case of prisoners of war or of any other individuals (GCIII Art. 87, API Art. 75.2.d, APII Art. 4.2.b). This is one of the fundamental guarantees established by the 1949 Geneva Conventions and their 1977 Additional Protocols. This guarantee is applicable not only to protected persons but to all individuals, no matter what their status or to what category of persons they belong, as defined by the Geneva Conventions (GCIV Art. 33).”

The Geneva Convention on the Treatment of Prisoners of War, article 3, paragraph 87, says:

“Collective punishment for individual acts, corporal punishment, imprisonment in premises without daylight and, in general, any form of torture or cruelty, are forbidden.”

Note that collective punishment is here grouped with torture as an offense. And while the paragraph concerns prisoners of war, civilians should have more rights than a prisoner of war, not fewer. Moreover, there is a sense in which Israel has taken all the Palestinians in Gaza prisoner.

The 1977 First Additional Protocol to the Geneva Conventions reiterated this principle even more broadly. Article 75, para. 2 concerns “persons who are in the power of a Party to the conflict.” That is, the law concerns not just POWs but everyone who falls into the hands of a belligerent. The 2 million Palestinians of Gaza have certainly fallen into Israeli hands, being completely surrounded by the Israelis and being deprived by the latter of airports, seaports and freedom of movement:

.”2. The following acts are and shall remain prohibited at any time and in any place whatsoever, whether committed by civilian or by military agents: a) violence to the life, health, or physical or mental well-being of persons, in particular: i) murder; ii) torture of all kinds, whether physical or mental;iii) corporal punishment; and iv) mutilation; b) outrages upon personal dignity, in particular humiliating and degrading treatment, enforced prostitution and any form of indecent assault; c) the taking of hostages; d) collective punishments; and e) threats to commit any of the foregoing acts.”

Again, imposing collective punishment on persons in your power where you are a party to a conflict is in the same category as murder and mutilation.

The Second Additional Protocol of 1977 to the Geneva Conventions, Art. 4.2.b further says:

1. All persons who do not take a direct part or who have ceased to take part in hostilities, whether or not their liberty has been restricted, are entitled to respect for their person, honour and convictions and religious practices. They shall in all circumstances be treated humanely, without any adverse distinction. It is prohibited to order that there shall be no survivors.

2. Without prejudice to the generality of the foregoing, the following acts against the persons referred to in paragraph I are and shall remain prohibited at any time and in any place whatsoever:

(a) Violence to the life, health and physical or mental well-being of persons, in particular murder as well as cruel treatment such as torture, mutilation or any form of corporal punishment;

So all but a tiny number of Palestinians in Gaza do not take direct part in hostilities toward Israel. Half of the residents of Gaza are children. The Israeli newspaper Haaretz estimates Hamas to have 30,000 activists in its military wing. The smaller Islamic Jihad, which is not affiliated with Hamas and often defies it, is thought to have 6,000 fighters. So there are like 36,000 combatants in Gaza and nearly 2 million noncombatants, i.e. persons who do not take direct part in hostilities.