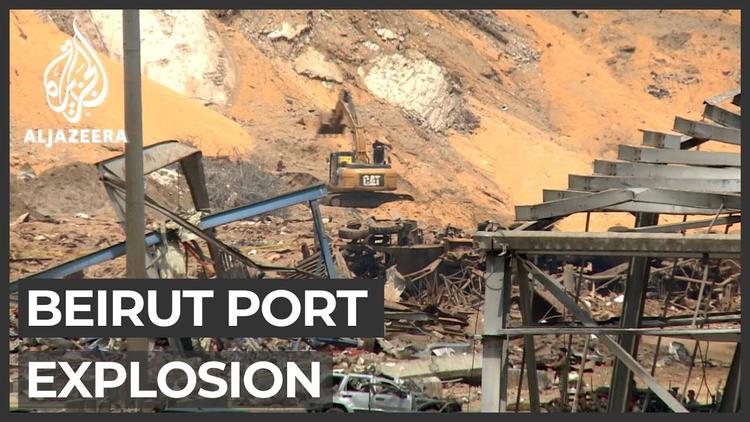 Since the massive explosion, the state has been absent, leaving people to fend for themselves – while leaders seem more concerned with dodging blame.

( OpenDemocracy) – On 4 August 2020, at 6pm the explosion at the Beirut port sent a destructive shockwave across a radius of more than 7 kilometres. The explosion was heard as far away as Cyprus, but it was felt across the whole world.

It is hard to measure the size of the human loss at this point. Official numbers put the number of dead at over 157 with over 5000 wounded at the time of writing. But many more are missing, and while people are still looking for their loved ones, burying the dead, caring for the wounded and making sense of the immeasurable trauma, the state in all its forms is absent, albeit begging for money and donations from the international community. That money will most probably not reach the afflicted but end up in the abyss of Lebanon’s corruption networks.

As of yet, we do not know exactly what happened. Many narratives are circulating and there is very little trust in any official statement. But even the official story is one of neglect of a criminal kind.

The story goes back to 2013, when the MV Rhosus sailed from Batumi, Georgia, heading to Biera in Mozambique carrying 2,750 tons of ammonium nitrate. The ship was owned and operated by Igor Grechushkin, a Russian citizen who is now resident of Cyprus, where he was last recorded as the manager of Teto Shipping. It was flying the Moldovian flag,

After facing technical problems, on 21 November 2013 the vessel docked at Beirut, and after inspection it was prevented from departing. Later, owing to the risks of retaining the ammonium nitrate on board the vessel, the port authorities discharged the cargo into the port’s warehouses.

Officials in the port authorities, the government, the judiciary and the military were all aware that the ammonium nitrate was stored unsafely at the port. They were also aware of its massive danger to national and human safety.

That enormous threat was left in the port for six years until it exploded on Tuesday, exposing with its massive shockwave the deadly levels of neglect, corruption and incompetence that sums up the Lebanese state.

Since the explosion, the state has been absent. The army and security forces, who were so quick at intercepting any sign of protest against corruption in the last year, have been nowhere to be seen in the relief and rescue operations. They were there, however, on the scene of the crime. They were there to unleash violence on the angry protesters last night. They were there protecting politicians who dared visit the vicinity of the port. Politicians who were met with anger from people looking for their loved ones or volunteering to help survivors. They were also there to prevent TV crews from filming.

Thugs supporting the former prime minister Saad Hariri even went as far as to attack and destroy the first-aid and relief tents made by volunteers to treat the wounded close to the crime scene, in Martyrs’ Square, because angry people nearby had hurled insults at Hariri, who was trying to use the spilled blood of the victims to score political points.

To add insult to injury, an official investigation committee has been formed, composed of the very people who are responsible for the neglect that caused the explosion

Figures of the Lebanese political establishment were absent from the ground as they probably knew that the people’s anger at them was too great. They were, however, very present on local TV stations, racing to justify themselves or make empty promises on political talk shows.

While people were clearing the rubble, assessing structural damage of buildings, protecting property, and scrambling to find and save survivors, the army and the internal security forces were busy attacking angry demonstrators.

The accused as investigators

To add insult to injury, an official investigation committee has been formed, composed of the very people who are responsible for the neglect that caused the explosion. The interior minister has refused calls for an international investigation because, he said – with no irony intended: “We are qualified to hold our own investigation.”

These were the words of a minister in a government that has not been anywhere to be seen, nor has it spoken to its people to explain a recovery plan or even to account for the damage and loss of life or count the missing people.

Meanwhile, the Beirut governor, a day after the explosion, had already calculated the cost of the explosion at between US$3 and 5 billion. A day later, it became US$10 to 15 billion. No one knows how the governor reached these figures, considering that no official body has been seen on the ground surveying the damage.

Corruption in Lebanon has always been one of the biggest causes of death. Tuesday’s explosion however, took this to the level of carnage.

The only public official to dare walk the streets was French President Emmanuel Macron, who visited the site of the crime amid the sound of the crowds chanting insults against his much-hated and conspicuously absent Lebanese counterpart, Michel Aoun. Aoun’s reign has been arguably the most catastrophic in the modern history of the country.

Not only the Lebanese themselves but also those who have long been subjected to Lebanese society’s racism, from migrant workers, to Palestinian and Syrian refugees – are busy reviving a city in ruins

Since 17 October 2019, the country has witnessed an historic popular movement of protest. People demonstrated across the country to end the extreme corruption that bankrupted the state for the benefit of the cronies in power. People’s savings are held hostage in the country’s corrupt banking sector, the local currency collapsed and infrastructure is in ruins as the country is unable to import much-needed goods, be it food, fuel or medicine. The demonstrations were met with violence and repression by the army, the internal security forces, and the various sectarian party thugs.

President Aoun, who has proven to be extremely sensitive when it comes to insults, and who has been far more busy at silencing and prosecuting social media posts critical of his failing rule than at addressing any of the urgent problems facing the country, is the main supporter of Badri Daher, director-general of Beirut Customs.

For years, investigative journalist Riad Kobeissi has revealed a series of scandals about Daher. Yet this official, whose responsibility for the safe storage of goods at the port is obvious, is a member of the investigation committee set up to shed light on the causes of the explosion.

People in the country – not only the Lebanese themselves but also those who have long been subjected to Lebanese society’s racism, from migrant workers, to Palestinian and Syrian refugees – are busy reviving a city in ruins. Meanwhile, the corrupt establishment, both those in power today as well as those playing at being the opposition, are busy trying to bank on the tragedy they are all responsible for.

Walid el Houri is a researcher, journalist, and filmmaker living between Berlin and Beirut. He is lead editor of the North Africa West Asia (NAWA) section at openDemocracy, and an affiliated fellow at the Institute for Cultural Inquiry in Berlin. He completed his PhD in Media Studies at the University of Amsterdam. His research deals with protest movements and the question of failure in politics.