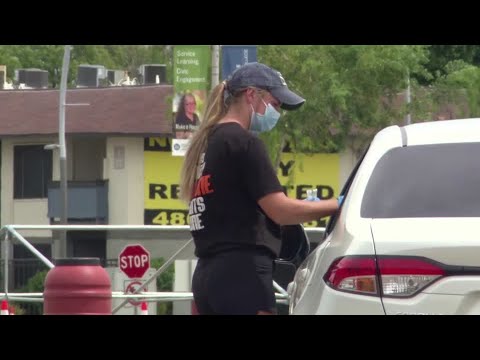 Ann Arbor (Informed Comment) – The US reported its six millionth coronavirus case, and deaths are headed toward 200,000. It is hard to explain just how bad the US death rate under Trump from the novel coronavirus is.

It isn’t only that it is worse than other industrialized democracies. It certainly is that. In South Korea, 324 persons have died, according to Johns Hopkins. The US is a little over six times more populous than South Korea, so that would be like 2,070 Americans dying.

So Americans under Trump are dropping dead at 88 times the rate of South Korea.

From South Korea’s competent point of view, they are now having an alarming spike of new cases in Seoul, with about 300 cases reported yesterday. So they have decided to close back down some entertainment venues such as karaoke bars and fitness gyms, and to further limit restaurant seating. The thing that strikes you about a news report like the one below is that the South Korean government authorities come across as highly competent, as watching the pandemic like a hawk, and as prepared to take efficient measures to deal with outbreaks. They have an excellent rapid testing and contact tracing system.

In contrast, Trump wants all businesses open all the time and sent the Michigan Militia after Gov. Gretchen Whitmer because she was in his view too cautious.

The US has had 6 million coronavirus cases. South Korea? It has had 19,947 cases. Since it is about a sixth the population of the US, that would be the equivalent of about 130,000 US deaths.

Germany has had 9,300 coronavirus deaths, the equivalent of 37,400 US deaths. The US death rate is nearly five times that of Germany.

Canada has had 9,164 pandemic deaths, the equivalent of about 82,000 US deaths given the difference in population of the two countries. .
Canada is five times better on cases and over two times better on deaths, even though the population of Canada and that of the United States are of similar backgrounds, their governmental systems are both rooted in the British, and they both have national health apparatuses. Canada is better.

The big difference between the two? Trump.

Out of 194 countries in the world, only 10 have had a worst per capita death rate than the United States. Some are also in thrall to right wing business classes, like the United Kingdom. Others are populist/fascist and also lack a proper national health system, like Brazil. Others just don’t have strong governance systems, like Italy and Spain.

It could be that the US has better health statistics tracking than some of the countries that appear to be doing better. That is not true of South Korea and Germany, which put us to shame. But even if some countries are not capturing some proportion of deaths because many old people are dying at home and country physicians are not reporting the deaths as from Covid-19, there are few countries where you can hide 180,000 corpses from the public. Statistics do not explain it.

What explains it is that Trump is bad at his job.

What do we make of the failures of the US in comparison with less developed nations?

Turkey has reported 6,326 deaths, the equivalent of about 25,000 US deaths. Turkey has a sophisticated government bureaucracy and health system, and while it may not be counting all the deaths, is it really off by a factor of 7?

That the US is doing so much worse than South Korea, Germany and Canada is galling enough. But there is a real possibility that it is doing worse than Argentina and Turkey.

Remember, too, that US testing capacity has been hobbled by Trump’s inaction or incompetence or malignant intentions, so a lot of old people are dying in bed uncounted in this country, too.

Trump’s casual racism in dismissing countries beyond the US and Europe as sh*thole countries looks more and more like unwarranted hubris. Trump has managed to turn the US into the sh*thole country.