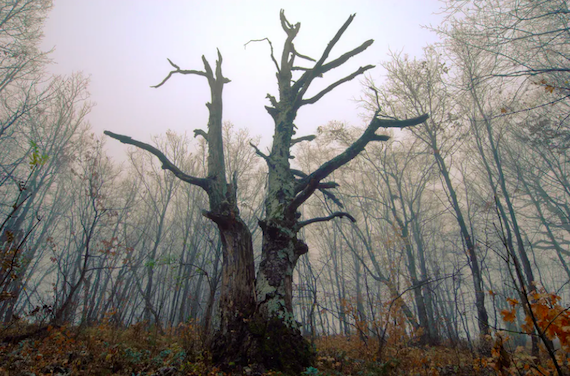 By Roel Brienen and Emanuel Gloor | –

As the world warms and the atmosphere becomes increasingly fertilised with carbon dioxide, trees are growing ever faster. But they’re also dying younger – and overall, the world’s forests may be losing their ability to store carbon. That’s the key finding of our new study, published in the journal Nature Communications.

In a world without humans, forests would exist in equilibrium, taking roughly as much carbon out of the atmosphere as they lose. However, humans have disturbed this equilibrium by burning fossil fuels. As a result, atmospheric CO₂ levels have increased leading to an increase in temperature and fertilising plant growth. These changes have stimulated tree growth over the past decades, even in intact, “old-growth” forests that have not experienced recent human disturbances. This in turn has allowed forests to take up more carbon than they release resulting in large net accumulation – what’s often called the “carbon sink”.

Earth scientists like us often wonder how long forests can continue to be a sink. The extra CO₂ will benefit trees everywhere, and temperature increases will help them grow in colder regions. So you could expect forests to continue soaking up much of our carbon emissions – and that is exactly what most earth system models predict.

However, possible changes in tree lifespan may throw a spanner in the works. A few years back when studying old-growth Amazon forests, we noted that initial growth increases were followed by increases in tree mortality. We hypothesised that this could be due to faster growth reducing how long trees live for. If true, this means predictions that the carbon sink will continue may have been overly optimistic, as they did not take into account the trade-offs between growth and longevity. Our new findings provide evidence for this hypothesis.

To study the relationship between tree growth and longevity, we used tree ring records. The width of each ring tells us how fast the tree grew, while counting rings provides information on age and allows us to estimate its maximum lifespan. We analysed more than 210,000 individual tree ring records belonging to more than 80 different species from across the globe. This large undertaking has been possible thanks to decades of work by dendrochronologists (tree ring specialists) from across the world, who made their data publicly available.

The hare and the tortoise

Our analysis shows that trees that grow fast, die young. It has been known for a long time that faster growing species live shorter. A balsa tree, for example, grows quickly to 20 metres or more but will live for only a few decades, while some bristlecone pine trees have been growing slowly and steadily for nearly 5,000 years.

We found that this is not only true when comparing different species, but also within trees of the same species. It was a surprise to find that this trade-off occurs in nearly all types of trees and ecosystems, from closed-canopy tropical forests to the hardy trees that brave the Arctic regions. A slow growing beech tree may be expected to live several decades longer than its fast-growing relatives. It is very much like the story of the hare and the tortoise – slow but steadily growing trees are the ones that live longest.

In order to study the implications of this we compared how much carbon would be accumulated under two tree simulation models. One simulation included this “grow-fast, die-young” trade-off, and the other used a model in which trees lived equally long, regardless of their growth rates. We found that trees growing faster and dying younger initially caused the overall level of biomass to increase, but it also increased tree mortality several decades later.

Therefore, eventually the forest starts to lose biomass again and return to the same level as in the beginning, but with faster growing and shorter-lived trees. Our models indicate that faster growth results in faster tree death, without real long-term increases in carbon storage. Some researchers predicted this long ago, and our results support their prediction.

These model predictions are not only consistent with observed changes in forests dynamics in the Amazon but also with a recent study reporting an increase in tree death across the globe.

Why do rock stars die young?

An intriguing question is why the fast-growing trees, the “rock stars” of the forest, live much shorter lives. We don’t yet have a conclusive answer, but we have looked at some potential mechanisms. For example, it could be that higher temperatures and other environmental variations that stimulate faster growth, also reduce tree lifespans. However, we find that reductions in lifespan are the result of faster growth itself.

One simple hypothesis is that trees die once they reach a certain maximum potential size, and the faster a tree reaches this size the younger it dies. Other possible explanations are that fast growing trees simply make cheaper wood (in terms of energy expenditure), and invest fewer resources in fighting off diseases and insect attacks, or are more vulnerable to drought. Whatever the cause, this mechanism needs to be built into scientific models if we want to make realistic predictions of the future carbon sink and thus how much CO₂ will be in the atmosphere.