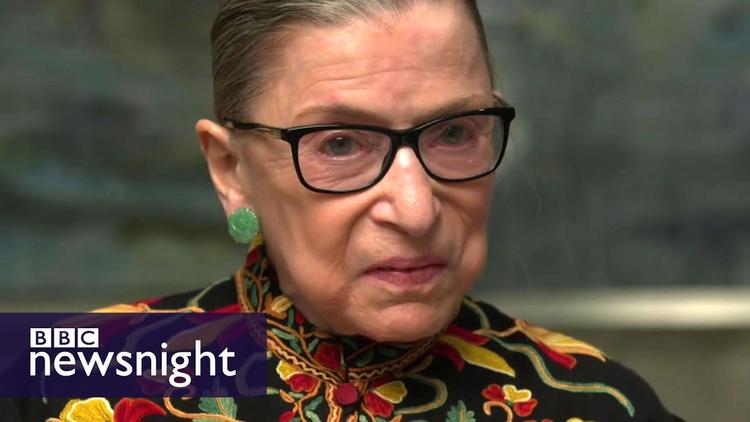 (Otherwords.org ) – The late justice dedicated her career to women and other marginalized Americans, and we owe her the same faith she had in us. By Sophia Paslaski | September 23, 2020

In August 1993, the late Ruth Bader Ginsburg took her seat on the U.S. Supreme Court. I was two months old. You could say we both accomplished a lot that summer.

Now, some 27 years later, the pair of us have accomplished so much more.

Ginsburg composed some of history’s most iconic dissenting opinions, inspired an entire generation of cynics to believe in a better America, and earned the highest honor bestowed by millennials: memehood.

I didn’t write any famous opinions, but I did learn the bilingual lyrics to “Oh, Canada,” in case I needed to fake Canadian while traveling abroad.

Yeah, I’m one of the cynics. But even with all that cynicism, many millennial women believed in some higher power of justice when we looked at Ginsburg — affectionately known to many as the “Notorious RBG.”

Unflappable, eloquent, and precise, RBG gave us heart when we had none. Her words, and her famous dissent collar, were the promised consolation for every attack on the common good. In the months following the 2016 election, she granted a rare interview in which she spoke of optimism.

“We are not experiencing the best of times,” she told the BBC. “But there is hope in seeing how the public is reacting to it. The Women’s March — I’ve never seen such a demonstration… There is reason to hope that we will see a better day.”

It has rarely been easy for women to hope.

In 1992, the right to bodily autonomy barely emerged intact from Planned Parenthood vs. Casey in the Supreme Court. Only in 1993 did three women senators — Sens. Carol Moseley-Braun, Barbara Mikulski, and Nancy Kassebaum — become the first women to wear pants instead of dresses or skirts on the Senate floor. By the time I was born that year, women were

In many ways, it feels like we have progressed little from that world.

But Ginsburg, of course, was right.

The 2017 Women’s March was “likely the largest single-day demonstration in recorded U.S. history,” according to the Washington Post. It was followed by an historic midterm in 2018 that saw record numbers of women running for office and winning seats. There was hope after all.

Today, that hope falters again. It is tempting now to give in to cynicism once more, to react to RBG’s passing as though Sen. Mitch McConnell has already plunked a freshly harvested Brett Kavanaugh 2.0 on the bench. But to give in would be a blight on the memory of our Notorious RBG.

RBG never gave in. She dedicated her career to women and other marginalized Americans, and we owe her the same faith she had in us. When she says there is reason to hope, even when things look bleak, we’d best believe her.

In her final days, NPR reports, Justice Ginsburg left one last pithy dissent for America: “My most fervent wish,” she said, “is that I will not be replaced until a new president is installed.”

Perhaps we can help grant her that wish.

We could call or write Maine Sen. Susan Collins and remind her of her promise to protect a woman’s right to choose. We could appeal to the better angels of Alaska Sen. Lisa Murkowski and West Virginia Sen. Shelley Moore Capito, the only other publicly pro-choice Republicans in the Senate.

We could hold each other accountable on Election Day and continue the trend of rising millennial turnout at the polls, which doubled between 2014 and 2018.

And, if nothing else, we can continue the great American tradition of civil disobedience, root ourselves in our belief in equality and good, and declare with all the courage and conviction that Ruth Bader Ginsburg herself possessed:

Sophia Paslaski is an administrative assistant and event coordinator at the Institute for Policy Studies. This op-ed was distributed by OtherWords.org.