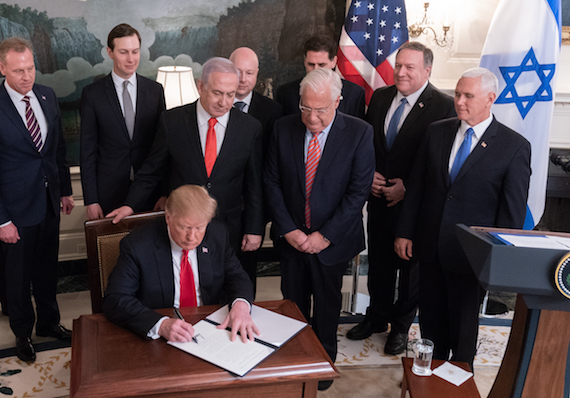 The episode points to the dangers of deep fake videos in our contemporary era, but points even more alarmingly to the danger of having an easily manipulated, not very informed or very bright president in the White House. We knew that Putin seems to be able to play him like a fiddle. But now it comes out that he is a captive audience to Netanyahu’s Likud follies.

Netanyahu is a notoriously obstreperous hard liner, and even Trump had noticed that he seemed to be the real obstacle to peace by May of 2017, Trump’s first year in office.

Aware that he was losing out in Trump’s eyes, Netanyahu allegedly resorted to dirty tricks.

He had a deep fake video manufactured of Mahmoud Abbas calling for the killing of children, and showed it to Trump on May 22 of that year, as Trump visited the Holy Land.

Then Trump saw Abbas in Bethlehem and allegedly shouted at him, loudly and red-faced. The Palestine News Network carried a report from an Israeli channel:

“Alleged reports said that Trump told Abbas “You deceived me in Washington (earlier meeting in May), “You spoke to me about peace, but the Israelis showed me that you personally have a hand in incitement.”

Ironically, Mahmoud Abbas’s Palestinian police are the ones who keep some order in the Occupied West Bank, cooperating with the Israeli military, and therefore he is widely viewed among activists as a collaborator rather than a freedom fighter.

Trump appears to have made the decision to cut $5.5 billion in US AID funds to the Palestinians in part on the basis of his rage about Abbas allegedly being a baby-killer, which was a Netanyahu lie.

It seems likely that Netanyahu and Trump are responsible for the deaths of Palestinian children through this deprivation.

The ironies of Netanyahu painting the Palestine Authority as inciters of violence against children should not be lost on anyone who knows anything about the prime minister’s bloody reign of terror in the Occupied Territories.

According to the UN, Netanyahu went on to react to the Great March of Return peaceful demonstrations in Gaza in 2018-20 by having 214 Palestinians, including 46 children, killed, and inflicting injuries on over 36,100, including nearly 8,800 children. It adds,

“One in five of those injured (over 8,000) were hit by live ammunition. Over 7,000 of the live ammunition injuries (some 88 per cent) were limb injuries, followed by injuries to the abdomen and pelvis. Hundred-fifty-six (156) of the limb injuries have resulted in amputations (126 lower limb and 30 upper limb). Out of these, at least 94 cases involved secondary amputations, due to subsequent bone infections . . . In 2020, an estimated 10,400 people will suffer severe mental health problems in connection to the GMR demonstrations, and nearly 42,000 people will have mild to moderate problems.[5] These figures include over 22,500 children.”

Many Palestinian minors who suffered leg wounds have had to have amputations or multiple operations. Israeli snipers whom Netanyahu ordered to target the innocent civilians repeatedly week after week told Haaretz that it would have been psychologically easier on them just to kill a few to discourage the weekly march:

“After some time there, in a debriefing, I said: ‘Let me just once take down a kid of 16, even 14, but not with a bullet in the leg – let me blow his head open in front of his whole family and his whole village. Let him spurt blood. And then maybe for a month I won’t have to take off another 20 knees.’ “

This is the second deep fake video we know that Trump fell for. The other, according to the CIA and NSA was made by the United Arab Emirates, whose hackers broke into a video feed in Qatar and tried to make it look as though Emir Tamim Bin Hamad Al Thani had advocated terrorism. The emir is a secular-minded, Western-educated ruler and graduate from Britain’s Sandhurst military academy who hosts a US airbase at al-Udeid in Qatar that has been key to the US struggle against ISIL and other Muslim extremists.

Trump gullibly believed the UAE propaganda and tweeted his relief that the cause of terrorism in the Middle East had finally been identified, seeming to give support to the Saudi-UAE attempt on June 5, 2017, to overthrow the Qatar government by placing it under a blockade.