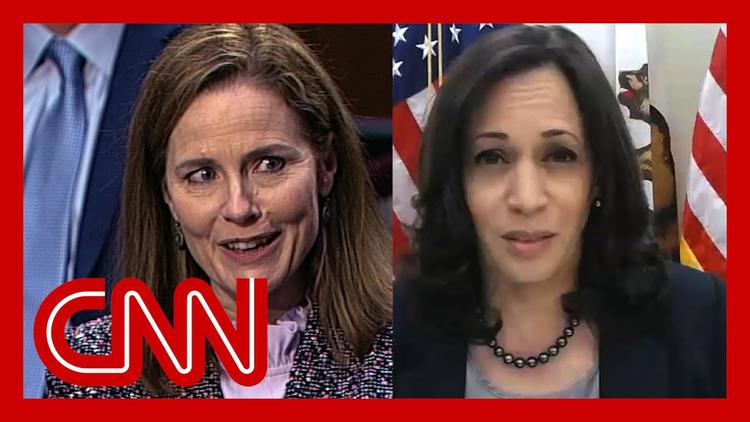 Ann Arbor (Informed Comment) – Amy Coney Barrett is a denialist when it comes to the human-caused climate emergency. Rachel Koning Beals at Marketwatch notes that when Sen. John Kennedy (R-La.) asked her about this issue, she replied, “I’ve read about climate change. I’m certainly not a scientist. I would not say that I have firm views on it.”

Then the next day, senator and vice presidential candidate Kamala Harris asked Barrett if she accepts that the coronavirus is an infectious disease and that smoking cigarettes causes cancer. Barrett said she did. Then Harris asked her about human-caused climate change. Barret got testy and replied, “I will not express a view on a matter of public controversy, especially when it’s politically controversial.”

Human-induced climate change through burning gasoline, coal and natural gas is not a “politically controversial” “matter of public controversy.” It is established science. It is just as likely that the coronavirus is not an infectious disease and that cigarettes don’t cause cancer as that human burning of fossil fuels isn’t heating up the planet dangerously. That she can’t tell the difference is a sign of either corruption or stupidity, and she isn’t stupid.

The “I’m not a scientist” line is a sure sign of denialism, and has been trotted out by dozens of prominent Republican politicians to get off the hook. The Republican Party is backed by Big Oil, which is bankrupt but doesn’t know it yet. Since humans do in fact produce billions of tons of carbon dioxide every year by burning gasoline, coal and natural gas, and since it is a dangerous heat-trapping gas that is like atomic bombs going off in the atmosphere, you don’t need to be a scientist to be alarmed.

Barrett’s father, Michael Coney, was an attorney for Shell Oil Company. Shell, like other oil companies, has known for decades that it is wrecking the planet, and their attorneys have been accomplices in covering up this trans-generational genocide. I do not know if Michael Coney played that role, but he was in a profession that was characterized by well-paid denialism.

Amy Coney Barrett is a former law professor at Notre Dame and it is quite impossible that she hasn’t looked into the climate crisis. She was born in Louisiana, and even though she was raised in Indiana, one tends to keep an interest in one’s natal land. Climate change-driven sea level rise endangers southern Louisiana more than almost any place else on earth. The likelihood is that she will go on looking out for the interests of Big Oil, true to her family metier.

Joseph Winters at Grist points out that Barrett’s judicial record is so thin that we really do not know how she feels about the environment. But her judicial philosophy makes her unsympathetic to government agencies getting creative with older laws on the books. It seems likely she would have ruled against President Obama’s restrictions on coal plants, based the Clean Air Act, since that law did not explicitly mention carbon dioxide emissions. She also takes a narrow view of standing. Children suing the federal government over its permissive policies toward greenhouse gas emissions would get nowhere with her, because they can’t necessarily show that a harm has already been done to them.

I don’t know any historians who think the jurisprudential doctrine of “originalism” to which she holds is anything but nuts. But it is a very useful cudgel in upholding the status quo. And upholding a rotten status quo is what Amy Coney Barrett is all about.

Here is the kicker. Barrett may well repeal Roe v. Wade, ending women’s right to control their own bodies and imposing a crackpot ahistorical definition of when life begins on all Americans. Whatever she says about being a soulless robot with no opinions, she will certainly be motivated by her religious convictions that configure even early term abortions as murder.

Already by 2005, fifteen years ago, the World Health Organization was estimating that the climate emergency was killing 150,000 people a year. That toll is going to rise steeply through the rest of this century. The UN has found that in 2000-2019, natural disasters, most of them climate-driven, doubled over the previous 20 years.

So if she does interfere with governmental efforts to curb greenhouse emissions, Barrett will be committing mass murder. Not so pro-life after all.

But the American people can make Barrett’s climate denialism and loyalty to the big corporations irrelevant. Elect a Democratic president and senate along with the House, and they can enact carefully worded laws that Barrett will have to interpret literally. And if it seems she will strike those laws down as contrary to our 18th century constitution, what with Ben Franklin only knowing about atmospheric science through that key and lightning experiment, then it really will be time to expand the court and slap term limits on her like.