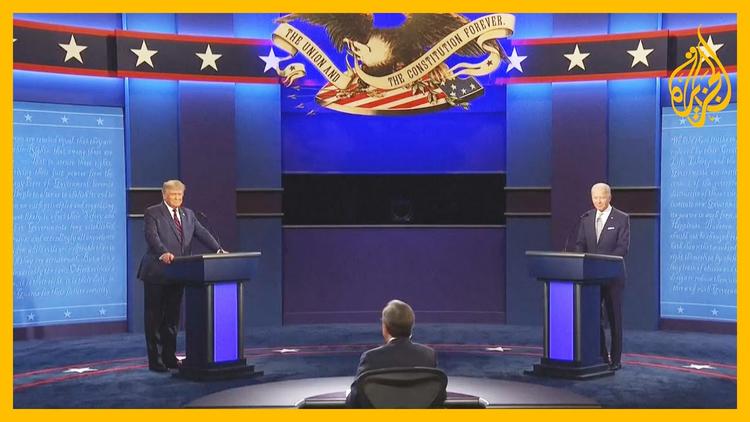 Ann Arbor (Informed Comment) – The Arabic press watched the Trump-Biden fiasco of a debate with alarm. The US is so involved in the Arab world that our elections are consequential for their lives.

When we hear that Arabs are looking at America and thinking “this looks like a military coup waiting to happen,” we should be afraid, very afraid.

No one knows what a military coup looks like better than an Arab journalist.

On hearing that Trump refuses to commit to stepping down if he loses the election, Faraj al-Shaykh al-Fazari asked in a headline for Sudanil, the oldest digital newspaper in Sudan, “Will American witness its first military coup if Trump is defeated but refuses to turn over power?

In an epochal switch, Sudan now has a civilian prime minister and is transitioning away from the military dictatorship of the genocidal war criminal Omar al-Bashir after massive public demonstrations in 2018-2019.

Sudan has even declared a separation of religion and state, among the few such declarations made by governments in the Arab world.

In contrast, Trump is playing to US evangelicals and has nominated Amy Coney Barrett to the US Supreme Court in order to impose Evangelical/ Catholic sharia on Americans.

Fazari notes that Trump has broken international treaties and disregarded local laws, and might well follow through on his threat to refuse to step down if he loses the November 3 election.

He writes that there are many mechanisms to make Trump step down, but the most dangerous of them is a military intervention. Such an intervention, he says, is recognized by US commentators as a danger to democracy.

Fazari in the end discounts the military possibility on the grounds that the US system is characterized by a separation of powers, with an executive, legislature and judiciary, and so is a government of laws rather than of men. Other considerations are the strong individual commitment to democracy among Americans, and the power of the fourth estate, the news professionals. Now, too, there is social media. Finally, the most powerful impediment of all, he says, is the Federal system where powers not specified for the federal government in the constitution are retained by the states.

One has a sense that he is writing this article for the revolutionary Sudanese in a sense. Sudan is currently a hybrid civilian-military state, but hopes to move to elections and civilian rule in the near future. Fazari is, reading between the lines, suggesting the formulation of a Sudan that might also be strong enough to resist slipping back into military dictatorship.

Omar Najib at the pan-Arab, London-based daily al-Rai al-Yawm, notes that the US is struggling against challengers such as China and Russia to maintain its position as the sole superpower. Najib also notes with alarm Trump’s refusal to commit to stepping down if he loses, and says that the president has been all over the place, sometimes calling the election a fraud and sometimes saying the Supreme Court will settle it, so that he ends up contradicting himself in numerous ways.

He says that this election season makes the US look like a Banana Republic.

Again, if anybody would know what that looks like, it is people in the Middle East, who are mostly sick and tired of it.

The Arab public was also amused that when Trump promised again to release his tax returns, Joe Biden said inshallah. This Arab phrase means ‘God willing,’ but it is often deployed as a deflection in colloquial Arabic. Will you come to my party? Inshallah. (It means, don’t hold your breath.)

People were impressed that Biden used it colloquially. Others split between thinking it was pretty historic for a presidential candidate to use Arabic that way, while a few complained that the phrase has an actual pious sense of ‘God willing’ in Islam and shouldn’t be used sardonically. (Those people seem to me not to get out much, since the phrase is used sardonically quite a lot among Arabic speakers.)