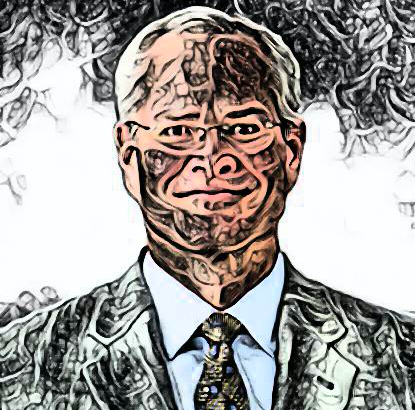 Ann Arbor (Informed Comment) – Trump made a mad dash to escape his hospital room at Walter Reed, browbeating his military physicians into letting him go while he was pumped full of a cocktail of potions that included euphoria- and delusion-inducing steroids. His lungs laboring with broken glass syndrome, he vaulted up the stairs to the White House balcony and then with a flourish pulled off his mask in front of cameramen, reporters and staff, for all the world like a zombie determined to infect the brains of his victims. He stood there heroically breathing, spreading his deadly infection about the White House. Whew. Joe Biden’s fumigators are going to have a time of it.

Not content to spread the novel coronavirus further in a White House that is already a ghost mansion because its denizens are quarantining or stricken, Trump tweeted out that Americans shouldn’t be afraid of the coronavirus. “Don’t let it dominate. Don’t let it take over your lives.” Trump omitted that he had been given hundreds of thousands of dollars of treatment at a time when millions of Americans can’t afford health insurance or have lost theirs because they lost their jobs. Trump is in court suing to take away their Affordable Care Act.

Trump’s determination to wish away the coronavirus even as he suffers from it derives from wishful thinking. Trump wants the stock market to soar, because he thinks all Americans will benefit from that and it will help him get reelected. But half of Americans have no securities, and the stock market does not lift all boats.

What is important to Trump is making money and turning that money into power, and more money.

That over 200,000 Americans are dead from the virus, some of them because they took his advice not to worry about it or change their styles of life, is not Trump’s concern. I don’t think he has ever even mentioned this death toll, which his niece likened to “mass murder” on his part.

People act as they do because of the goals they are trying to achieve. A president’s proper goals would be to protect the lives and security of the American people. But that is not Trump’s highest value. His own wealth and power, his own image, are what drive him.

Hence, the United States is a mess. Regal Cinemas just announced they were closing all their movie houses in the US. Ironically, Trump, whose celebrity is a product of Hollywood via The Apprentice may by his malign neglect kill the institution of going to the movies. But you know what? China announced today that all their cinemas would return to normal operation. Because they deployed testing, contact tracing, social distancing and mask wearing intensively last spring, and they wrung the virus out of their society for the most part. It is yesterday’s news in Shanghai.

The genocidal selfishness of some in the American business class was also visible on Monday in the energy sector.

A creature named Darren Woods, the CEO of ExxonMobil in Irvine, Texas, has a plan for you. He intends to increase carbon dioxide emissions every year by the entire output of the country of Greece.

Carbon dioxide is a very dangerous heat-trapping gas. Putting more of it into the atmosphere is like blowing up nuclear bombs up there.

ExxonMobil, unlike Shell or BP, isn’t even pretending to get into green energy in a significant way. Its business model is burning up the earth, and by God, Darren Woods is going to burn it up bigger and better than ever before, to increase ExxonMobil’s profits.

The earth be damned. The health of the American people be damned.

This is a sort of psychopathocracy, rule of the conscienceless.

Trump is a little unusual among the business classes, but he is not that great an outlier. The main difference between Donald Trump and Darren Woods, both of them narcissists responsible for deaths on a mass scale, is that Woods prefers to avoid the limelight.

If any of this makes you angry, it is a sign that you are a normal person. And, luckily, you have a way to intervene in these travesties. Vote Trump out of office early next month. And make your next car, if you can afford it, electric. Look into the current crop of electric vehicles. The prices have come down substantially, and the range is way up, to 250 or 300 miles. Most car trips are 5 miles or less. People are always asking me if electric cars can merge on the highway. Dude. They have amazing pick-up– they are like race cars in that regard. If you own a home and will be in it ten years or more, you are losing money if you don’t up solar panels. Then you can run the car off the sun, along with your appliances. That will cause the car to pay for itself more quickly.

And you’ll never have to buy gasoline from ExxonMobil again, or put a single pound of explosive carbon dioxide into the atmosphere.

Not everyone can afford an electric vehicle right now (though millions can). But everyone can vote. Once we put Biden in, we have to pressure him to put the weight of the US government behind electrifying our transportation. With the right rebates, everyone can afford to buy electric. And let’s make sure that American-made electric cars dominate the market and provide stable, good-paying jobs.

After a while, we won’t be hearing anything about Donald Trump or Darren Woods. The air will be clear, of viruses and gasoline fumes.