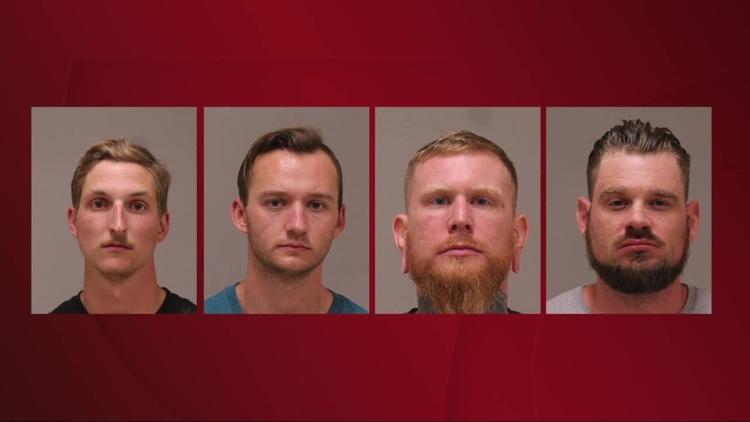 The U.S. militia movement has long been steeped in a peculiar – and unquestionably mistaken – interpretation of the Constitution, the Bill of Rights and civil liberties.

This is true of an armed militia group that calls itself the Wolverine Watchmen, who were involved in the recently revealed plot to overthrow Michigan’s government and kidnap Gov. Gretchen Whitmer.

Embed from Getty Images
Michael Null (L) and William Null (R) attend a anti shutdown rally organized by Michigan United for Liberty on the steps of the Michigan State Capitol in Lansing, Michigan, on May 14, 2020. Others are unidentified. – Thirteen men, including members of two right-wing militias, have been arrested for plotting to kidnap Michigan Governor Gretchen Whitmer and “instigate a civil war”, Michigan Attorney General Dana Nessel announced on October 8, 2020. The Nulls were charged for their alleged roles in the plot to kidnap Whitmer, according to the FBI. The brothers are charged with providing support for terroristic acts and felony weapons charges. (Photo by JEFF KOWALSKY / AFP) (Photo by JEFF KOWALSKY/AFP via Getty Images).

As I wrote in “Fracturing the Founding: How the Alt-Right Corrupts the Constitution,” published in 2019, the crux of the militia movement’s devotion to what I have called the “alt-right constitution” is a toxic mix of constitutional falsehoods and half-truths.

The term “militia” has many meanings.

The Constitution addresses militias in Article 1, authorizing Congress to “provide for organizing, arming and disciplining, the Militia.”

But the Constitution makes no provision for private militias, like the far-right Wolverine Watchmen, Proud Boys, Michigan Militia and the Oath Keepers, to name just a few.

Private militias are simply groups of like-minded men – members are almost always white males – who subscribe to a sometimes confusing set of beliefs about an avaricious federal government that is hostile to white men and white heritage, and the sanctity of the right to bear arms and private property. They believe that government is under the control of Jews, the United Nations, international banking interests, Leftists, Antifa, Black Lives Matter and so on. There is no evidence of this.

On Oct. 8, the FBI arrested six men, five of them from Michigan, and charged them with conspiring to kidnap Whitmer. Shortly thereafter, state authorities charged an additional seven men with, according to the Associated Press, “allegedly seeking to storm the Michigan Capitol and seek a “civil war.” Included were the founders and several members of the Wolverine Watchmen.

As revealed in the FBI affidavit accompanying the federal charges, the six men charged claimed to be defenders of the Bill of Rights. Indeed, some of the men in April had participated in rallies in Lansing, the state capital, where armed citizens tried to force their way onto the floor of the State House to protest Governor Whitmer’s pandemic shut-down orders as a violation of the Constitution by a “tyrannical” government intent upon sacrificing civil liberties in the name of the COVID-19 fight.

According to the FBI’s affidavit, the conspirators wanted to create “a society that followed the U.S. Bill of Rights and where they could be self-sufficient.”

Militia members imagine themselves to be “the last true American patriots,” “the modern defenders of the United States Constitution in general and the Second Amendment in particular.”

Hence, the Bill of Rights – and especially the Second Amendment, which establishes the right to bear arms – figure prominently in the alt-constitution. It is no accident that the initial discussions about overthrowing Michigan’s so-called tyrannical governor started at a Second Amendment rally in June.

Embed from Getty Images
William Null (R) stands in the gallery of the Michigan Senate Chamber during the American Patriot Rally, organized by Michigan United for Liberty, to demand the reopening of businesses on the steps of the Michigan State Capitol in Lansing, Michigan, on April 30, 2020. Others are unidentified. – Thirteen men, including members of two right-wing militias, have been arrested for plotting to kidnap Michigan Governor Gretchen Whitmer and “instigate a civil war”, Michigan Attorney General Dana Nessel announced on October 8, 2020. The Nulls were charged for their alleged roles in the plot to kidnap Whitmer, according to the FBI. The brothers are charged with providing support for terroristic acts and felony weapons charges. (Photo by JEFF KOWALSKY / AFP) (Photo by JEFF KOWALSKY/AFP via Getty Images).

No restrictions on rights

Additional foundational principles of militia constitutionalism include absolutism. Absolutism, in the militia world, is the idea that fundamental constitutional rights – like freedom of speech, the right to bear arms and the right to own property – cannot be restricted or regulated by the state without a citizen’s consent.

The far right’s reading of the First and Second Amendments – which govern free speech and the right to bear arms, respectively – starts from a simple premise: Both amendments are literal and absolute. They believe that the First Amendment allows them to say anything, anytime, anywhere, to anyone, without consequence or reproach by government or even by other citizens who disagree or take offense at their speech.

Another key belief among militia members is the principle of constitutional self-help. That’s the belief that citizens, acting on their inherent authority as sovereign free men, are ultimately and finally responsible for enforcing the Constitution – as they understand it.

Demonstrating this way of thinking, the men arrested in Michigan discussed taking Gov. Whitmer to a “secure location” in Wisconsin to stand “trial” for treason prior to the Nov. 3 election. According to Barry County, Michigan Sheriff Dar Leaf – a member of the militia-friendly Constitutional Sheriffs and Peace Officer Association – the men arrested in Michigan were perhaps not trying to kidnap the governor but were instead simply making a citizen’s arrest.

Leaf, who appeared at a Grand Rapids protest in May of Gov. Whitmer’s stay-at-home order along with two of the alleged kidnappers, mistakenly believes that local sheriffs are the highest constitutional authority in the United States, invested with the right to determine which laws support and which laws violate the Constitution. The events in Michigan show how dangerous these mistaken understandings of the Constitution can be.

There will be more

The Wolverine Watchmen are not a Second Amendment militia or constitutional patriots in any sense of the word. If they are guilty of the charges brought against them, then they are terrorists.

The FBI and Michigan law enforcement shut down the Watchmen before an egregious crime and a terrible human tragedy unfolded. But as I concluded just last year in my book, “there is little reason to think the militia movement will subside soon.”

Unfortunately, I did not account for the possibility that President Trump would encourage militias “to stand back and stand by,” which seems likely to encourage and embolden groups that already clearly represent a threat. Expect more Michigans.

WXYZ Detroit 7: Expect a trial in governor kidnapping plot case, and how it differs from Hutaree trial