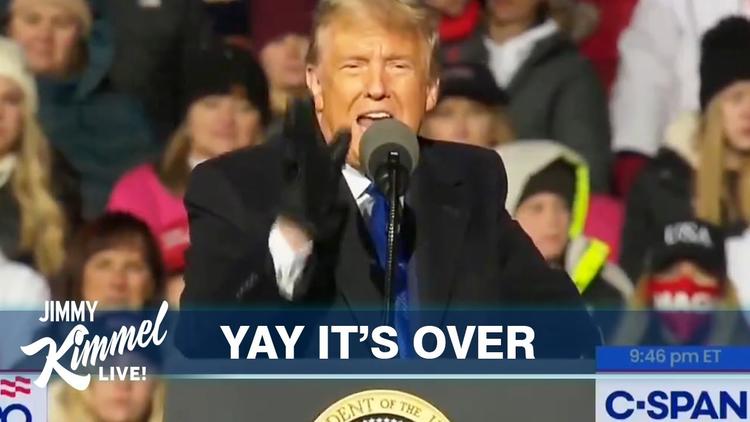 Ann Arbor (Informed Comment) – Bruce Y. Lee of Forbes reports that a couple of days ago, the Trump White House put out a press release listing the administration’s scientific achievements. Number one on the list was “Ending the Pandemic.”

But I think even Nazi propagandists would have balked at the gargantuan Trump level of falsehood. Indeed, it is hard to think of an American president who told so titanic a lie since George W. Bush intimated that Iraq was two years away from having a nuclear weapon.

As the US enters the feared Second Wave of the coronavirus pandemic, the country faces a dark winter. In the past week, 500,000 Americans fell ill with COVID-19, with one being infected every 1.2 seconds. On Tuesday, 44,000 people were hospitalized in one day, a third more than in a typical mid-September day.

As Trump appointee Brett Giroir said forthrightly this week, this spike in transmission is not because of extra testing, contrary to the lie that Trump keeps telling.

The winter months worsen the transmission of infectious diseases because the cold forces people indoors, into close quarters where they are breathing, sneezing and coughing on one another. Despite all the irrational beach shaming in which the media engaged last summer, as Zeynep Tufekci noted, there were no big outbreaks traced to beaches. It was hanging out in bars and restaurants that was dangerous. Or in churches, singing and talking loudly. Indoors, for hours at a time. The novel coronavirus is a respiratory disease, which is spread primarily by other people breathing on you. Since a lot of people have the disease without knowing it, I think you just have to assume that any stranger you encounter could have it, and I would no more let people breathe on me in close quarters for many hours than I would let them spit on me. I have to say, I cannot understand it when I see Trump’s devotees crowded together at rallies without masks, sucking down potentially infected air that had just been in someone else’s moist lungs. This is a level of ignorance or recklessness that it is hard for me to fathom.

By the time Trump goes out of office, if he is defeated Tuesday, he may well leave behind a toll of nearly 500,000 dead Americans. In 1918 the Spanish Flu killed 675,000 Americans, a century ago before many of the advances of modern medicine. Trump’s studied inaction on the pandemic has teleported us back in time 100 years, leaving us as vulnerable to this pandemic as our ancestors four generations ago were to that one. In 1918, remember, there were no antibiotics, no knowledge of DNA, no quick blood tests, no MRIs, no television. Trump has us living with this pandemic as though we were still driving Model T’s and flying biplanes.

Nor is there any end in sight. Dr. Anthony Fauci warned that even with a vaccine, the country might not return to a semblance of normalcy until early 2022. I think he is assuming that Trump will lose when he says this. It is possible that with an erratic madman at our helm, we could go on suffering from the pandemic for years.

On Sunday, White House chief of staff Mark Meadows admitted, “We’re not going to control the pandemic.” When challenged as to why by CNN’s Jake Tapper, he replied that it is because it is a respiratory disease.

Me, I take away from it being a respiratory disease that I shouldn’t let people breathe on me, not that I should fatalistically risk being infected.

The Trump crew has fallen for a crazy Libertarian theory that you could let young people, who are less likely to fall seriously ill or die from the coronavirus, circulate freely and contract it, while keeping the more vulnerable elderly away from them. As Steven Albert, Professor and Chair of Behavioral and Community Health, University of Pittsburgh, argues knowledgeably, this policy does not work. It would likely kill a million people. And a lot of younger people would end up being ill and dying, because of the sheer scale of this irresponsible experiment with the lives of millions. He points out that this was essentially the Swedish approach, and it did not work. It isn’t even clear that you could ever get to herd immunity. It may be that people are only immune for a few months after contracting the disease, which would mean that herd immunity would always recede the way mirages of water do in the desert. Albert points out that vaccines are the only sure way to induce herd immunity.

As for the 4 other scientific achievements that Trump boasted of? Those were incredible falsehoods, too, as Lee notes at Forbes. Trump has slashed funding for science and has unleashed deregulated pollutants and billions of tons of carbon dioxide on the environment. At one point his EPA approved an insecticide that causes brain damage in babies.

Somehow, somewhere, you can be sure that all the death and destruction Trump has unleashed on us are making him and his cronies a lot of money.