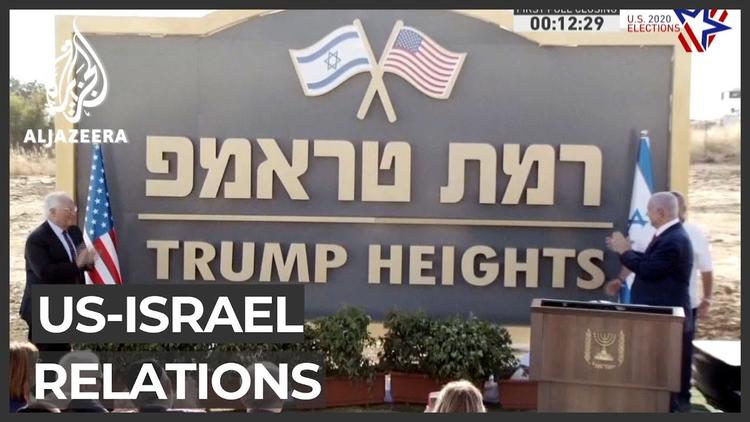 ( Middle East Monitor) – As I write, the United States is going through two simultaneous processes: the formal victory of the Democratic Party oligarch, Joe Biden, the former Delaware state senator and the former vice president of Barack Obama (2008-2016); and legal appeals from incumbent President Donald Trump to stop the count and review the electoral process. Large financial corporations can be found behind both candidates, but the issue at stake here is that both are supporters of the State of Israel, and the feeling is mutual, which is odd given that Trump feeds off the collective neuroses of white Americans for whom racism, including anti-Semitism, is the norm.

This is the paradox. When it comes to the projection of US power in the Middle East and, especially, in relations with America’s only strategic ally in the region, Israel, the Democrats and Republicans differ little. The domestic dimension of pro-Israel policies within the US, especially in the case of the so-called alt-right and Christian Evangelicals, exposes the hypocrisy and double standards at play.

Trump needs the white supremacists of the far right, racists who hate all cultural matrices that are not “white”. That is why it is common to see anti-Zionist Jewish groups mobilised in the US against Trump supporters. Intellectuals of Jewish heritage who are committed to the Palestinian cause include Amy Goodman and Noam Chomsky. They also opposed efforts to impose legal and media coups, as well as federalisation using the National Guard against protesters who took to the streets following the killing of George Floyd in Minneapolis. Perversely, Trump has needed Israel and Benjamin Netanyahu’s warmongering to pander to the far-right Zionists who back him financially, despite the anti-Semitism of his supporters. At the same time, Trump also needed the sectarian and paramilitary militias that thrive on white poverty and America’s gun laws which allow them to carry military-grade weapons in public.

Taking into account the modus operandi that hounded Jeremy Corbyn with accusations of “anti-Semitism” from the moment that he became leader of the British Labour Party it is clear that the pro-Israel lobby coordinated by the occupation state’s Ministry of Strategic Affairs and Public Diplomacy is pursuing aggressive surveillance of those considered “enemies of the colonial project” rather than actual anti-Semites. It doesn’t do anything about the open anti-Semitism of Trump supporters.

It is not for lack of information about the racists. A well-known ally of Israel in the US is the Anti-Defamation League (ADL). The ADL maps correctly the alt-right and the “civic” right or generalist right, which claims to be misogynistic, hates “politically correct speech” and presents some degree of xenophobia or the defence of “Judeo-Christian civilisation”. In addition, it points out recognised leaders, their organisations and internet portals. By the logic of the pro-Trump right and, in particular, the proselytising in defence of a cultural war, the “alt-light” is the powerful weapon of non-religious diffusion that Israel needs in order not to depend solely on the Evangelical Christians and large media conglomerates to spread its colonial theses and the defence of normalised Apartheid in occupied Palestine.

It turns out that the set of these organisations added to the more traditional ones, such as the Ku Klux Klan and state militias, form the greatest threat to domestic security according to America’s own repressive apparatus, starting with the FBI and the Interior Ministry and the Department of Homeland Security. As if that were not enough, these same xenophobic, anti-Semitic and Islamophobic groups (because being alt-right or alt-light, they hate the Semitic majority, who are the Arabs) have infiltrated police departments across the US. Moreover, Trump openly refused to condemn supremacist violence at the “Battle of Charlottesville” in August 2017 and repeated his refusal during the first televised debate of the presidential election campaign.

Support for Trump’s position came from the Israeli cabinet, perhaps following a Machiavellian logic of “my friend’s friend may not be my enemy”. It may also be for something even more unacceptable; the tacit recognition that the alt-light has a role to play in the grotesque “cultural war” that Israel uses to expand its networks of supporters for its colonisation of Palestine, its imposition of Apartheid on the Palestinians and the conquest of Arab territories.

READ Trump, Israel and Gulf states plan a ‘flood’ of sanctions against Iran as parting gift

Can anyone in their right mind imagine that Zionist intelligence agencies have not mapped the anti-Semites in the alt-right and alt-light, and cannot promote smear campaigns or cyber interventions on their websites? Since the extreme right is necessarily organised through the internet, and Israel monitors this very closely, the operational cost of such a campaign to shut down far-right extremism would be minimal. Why doesn’t Israel do this?

The Jewish community in the US has a relatively new, but very vigorous, organisation called Jewish Voice for Peace (JVP). It supports the Boycott, Divestment and Sanctions (BDS) movement for which the ADL describes JVP as an advocate of anti-Semitism. The argument is pathetic: “Furthermore, the JVP’s continued insistence that virtually all criticisms of Israel cannot be anti-Semitic provides cover for anti-Semites who express their malice towards Jews as mere anti-Zionism.”

The JVP is right: “Israel is a state and does not represent communities in the diaspora… It is what it is.” However, if the Israeli government takes a stand in the fight against anti-Semitism, it should stop looking for anti-Semites where they do not exist, which is not amongst defenders of human rights and universal rules of refuge and return. If Netanyahu and his sidekick Benny Gantz are really serious about tackling anti-Semitism, they should tackle the support base of their main ally in the White House. This has never happened, of course, and it never will.

The mission of those on the left is to eradicate all racism, including anti-Semitism. In doing so it will, as a matter of course, have to bring an end to imperialism and racial supremacy wherever they are found.

Bruno Beaklini (Bruno Lima Rocha Beaklini), is a libertarian socialist activist of Arab-Brazilian origin, political scientist and professor of international relations and journalism. He writes weekly for MEMO and has his articles published regularly on portals such as IHU, GGN, Brasil de Fato, Popular Reporter, Semana On, El Coyote, Canhota Blog, Brasil de Fato, Forum, Other Words, Brazil Debate and special articles on Major Card. He is a frequent guest on Latin American and Spanish-speaking radio stations, as well as on Hispan TV, Press TV, RT and Radio Sputnik. He is editor of the channels of the Strategy & Analysis portal.